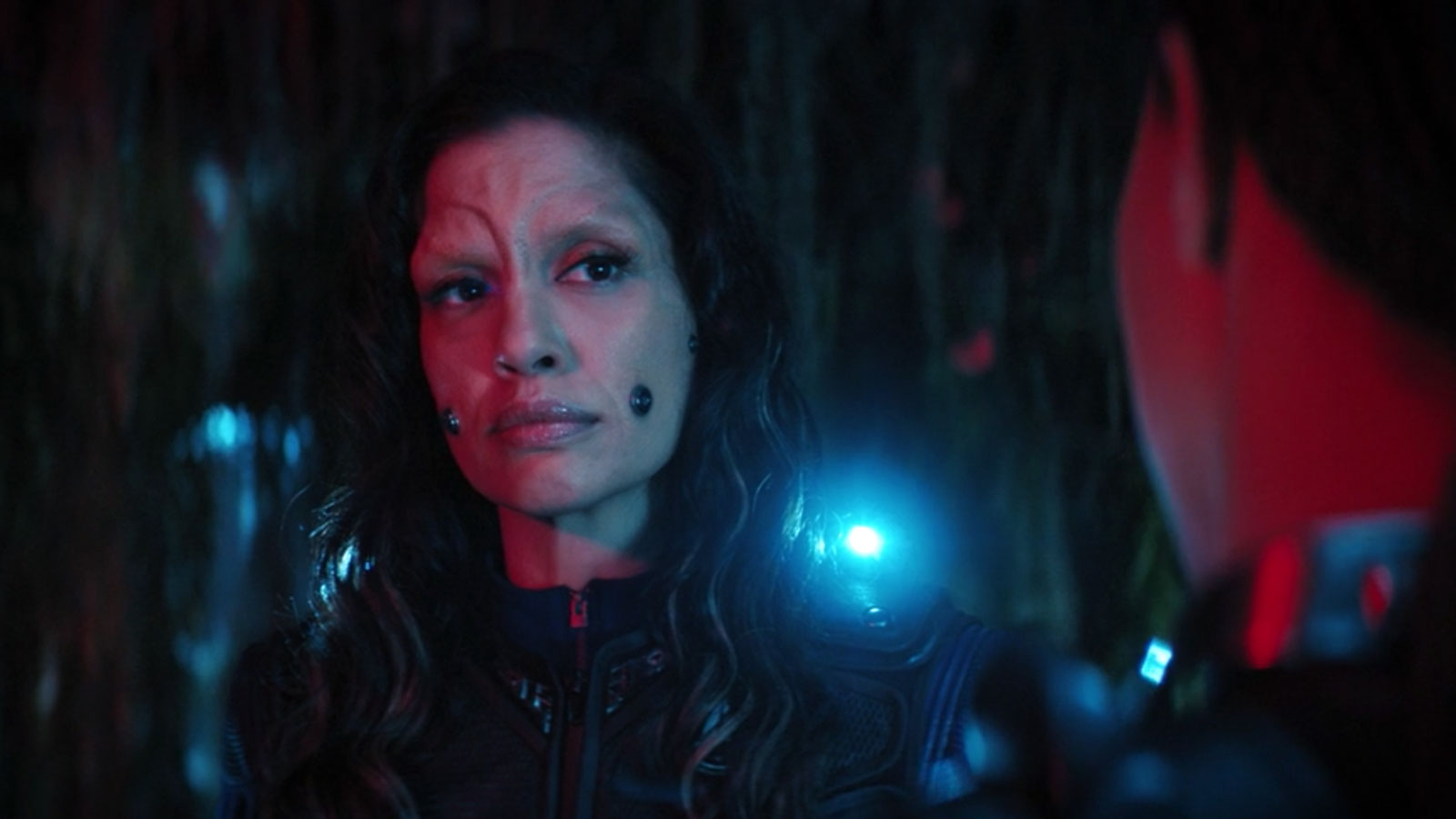 This week’s episode, “Die Trying,” finally shows us what we’ve all been itching to see: the Federation as it exists in the 3100s. Thanks to the Tal symbiote inside Adira (Blu del Barrio), Discovery is able to travel to the Federation headquarters – and of course, it isn’t totally what they expect.

On the surface, the Federation is wondrous. Hidden inside a distortion field powered by the ships inside it, Federation technology is clearly far and away more advanced than anybody on Discovery imagined. It’s entertaining seeing the child-like wonder on the bridge crew as they enter their new home base. As the ship approaches Federation headquarters, we learn that there are bio-organic and holographic ships, as well as other advanced technology in the Federation’s service. One of the ships the Discovery passes by has a familiar name to Star Trek fans: the Voyager-J. Yes, hidden inside the Federation HQ is the 11th ship to bear the name, the first, of course, being Captain Janeway’s ship in Voyager.

After the wonder of the “new” Federation subsides, the Discovery crew quickly realizes they are under suspicion. As Starfleet’s command in chief Charles Vance (Oded Fehr) explains, time travel has been declared criminal, and because there are no historical records of Discovery‘s actions, their story can’t be corroborated. And to be honest, they have a wild story to tell. To earn the trust of the Federation, Discovery embarks on a mission to save a group of aliens refugees who are suffering from a sickness, the cure for which lies in the seed vault ship U.S.S. Tikhov.

The idea of a seed vault ship is grounded in reality, as there are real-life seed vaults that house copies of plants found around the world. The idea is if there is a global crisis, these seeds will ultimately survive such devastation. It makes perfect sense, then, that the galaxy in Star Trek has its own version of a seed vault. As we see in this episode, the Tikhov utilizes a nifty storage system to house these countless seeds, and the care for the ship falls to a different species from time to time. The most recent, ill-fated caretakers happen to be Barzans, the same species as Nhan (Rachael Ancheril). How convenient!

Yes, Nhan is a major focus of this episode, and that’s a nice change. Since her introduction in season two as an engineer aboard the Enterprise, we have never really gotten to know her very well. Her sparse character development came when she became suspicious of Airiam in “Project Daedalus.” Nhan ultimately ended up jettisoning Airiam into space, and it was this action that helped her make the decision to remain aboard the Discovery as they headed into the future. Now, “Die Trying” illuminates much of Nhan’s backstory, including how she regrets jumping into the future because she misses her family.

Well, as one might guess, Discovery pulls a trick out of The Walking Dead‘s old playbook: if a character is spotlighted during an episode, it’s likely because something major is going to happen to that character. This show did the same thing with Airiam in the aforementioned episode from season two. In this episode, however, Nhan doesn’t suffer some ill fate. On the contrary, she decides to help the remaining caretaker aboard the Tikhov watch over the seed vault, as the ship is already configured nicely for her species. We can’t help but think this resolution is a convenient off-ramp for Discovery‘s writers regarding Nhan. It’s clear the writers didn’t have much to do with the character before this episode, and perhaps this is a way to let Nhan go for a while. In typical Discovery style, perhaps she will be back later in the season to help save the day, but for now, we are okay with letting the character rest.

This episode generates a couple of major lingering questions. The seed vault prompts a mystery for Michael Burnham (Sonequa Martin-Green), who notices that the music played in a hologram of deceased members of the caretaker crew is the same music played by Adira in the previous episode. Adira was able to play that music thanks to skills learned by Tal’s previous host, Gray (Ian Alexander). How can the music be the same? It’s an intriguing question, and we can’t wait how the show’s writers pull this mystery together.

The second mystery: what is wrong with Philippa Georgiou (Michelle Yeoh)? After a revealing and entertaining questioning by an unnamed operative of the Federation (David Cronenberg) – who seems a little too interested in the fact that Georgiou is from the Mirror Universe – Georgiou seems thoroughly impacted by the notion that her original universe is no longer accessible thanks to the two universes drifting apart over the previous centuries. Yeoh steals the episode in this multi-scene conversation, as her character comes off as plotting, intelligent, secretive, and just a little vulnerable. At the end of the episode, Burnham approaches Georgiou, only to find her despondent for a few moments. Eventually, Georgiou snaps out of it and brushes the moment off, but we do see her concerned about her momentary unresponsiveness. Perhaps she is experiencing her own version of PTSD, much like what Detmer (Emily Coutts) seems to be dealing with? If there’s one thing Discovery‘s writers are good at, it’s hooking us onto the next episode.

Taken together, “Die Trying” is a fast-paced entry that re-introduces fans to the Federation, and it’s just different enough from what we know and love to make Discovery‘s take on it fresh and interesting. Discovery‘s arrival signals the beginning of a new chapter for this Federation, and it shows that even though the ship and its crew are antiques, they will still prove essential to the post-Burn recovery. Determining what exactly caused the Burn, something the Federation hasn’t been able to do even after 120 years, is now Discovery‘s new objective, and we’re totally here for that.