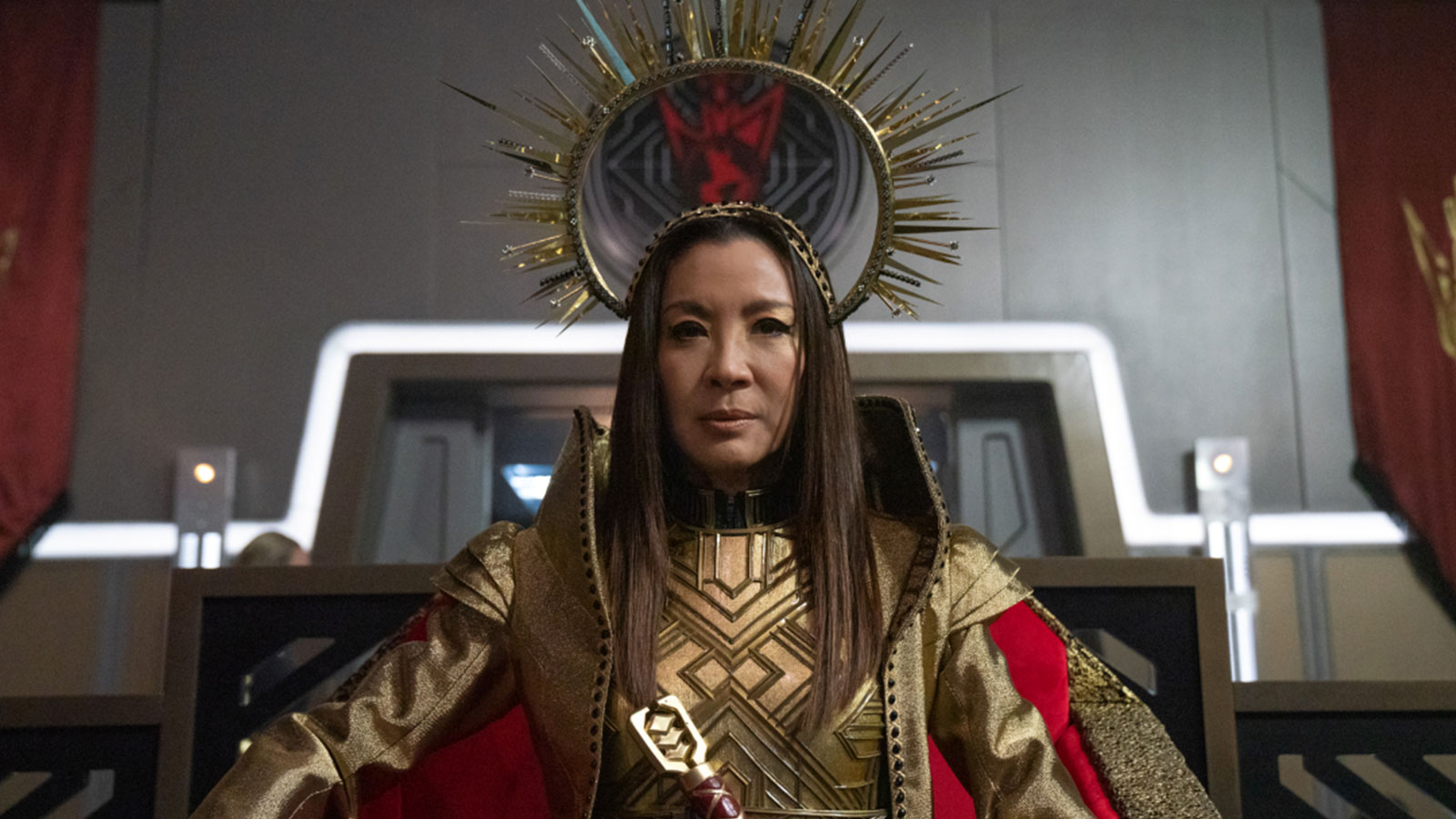 After suffering in the Prime Universe for so long, former Mirror Universe Emperor Georgiou (Michelle Yeoh) finally gets back to where she belongs: the Mirror Universe. Or so it appears.

At the start of this episode, it’s clear that Georgiou is physically being torn apart by her continued presence outside her native universe. We learn this because the mysterious Kovich (David Cronenberg), who we would bet latinum on not being a typical Starfleet officer, tells Doctor Culber (Wilson Cruz) about another being who not only traveled time but universes: Yor, a Federation time soldier from the Temporal Wars. Kovich explains that Yor traveled between the Prime Universe and “an alternate universe created by the temporal incursion of a Romulan mining ship.” This clearly references the events of Star Trek (2009), where Nero (Eric Bana) traveled back in time to get revenge on Spock (Leonard Nimoy/Zachary Quinto), thus creating the so-called Kelvin Timeline. Because he traveled across time and universes, Yor’s body just couldn’t cope with the trauma, and it started to break down. As Kovich says, “every molecule fights to either go back in time or jump a cosmic divide.” So, that’s what’s happening with Georgiou, and her time is running out.

This is a fate Georgiou intends to meet in the typically aggressive Terran way, and Yeoh delivers one of the best scenes of her tenure on this show as Georgiou angrily opens up to Burnham in the ship’s rec room. Georgiou starts fighting Burnham in an effort to get Burnham to kill her, thus sparing her the grotesque death that surely awaits her. In a revealing moment, Georgiou is mere inches from landing a decapacitating sword blow to Burnham’s neck, but the younger woman does not move an inch because she knows deep down, Georgiou’s bluster is just that. Burnham convinces her that fighting to the death is the coward’s way out, that Georgiou needs to accept the assistance of the Discovery‘s crew to try and cure her, and that ultimately Georgiou will never find the kind of death she is looking for if she doesn’t try to cure herself.

Culber seeks the help of Zora, the ship’s resident sentient computer with a soft spot for the Discovery crew. Armed with the Sphere data, the computer points them to an uninhabited planet on the edge of the Gamma Quadrant. No one knows why the computer provided this planet as the potential place for Georgiou’s cure, but there is little choice but to go and see what they find. In an interesting twist, it is Saru (Doug Jones) who objects to taking Discovery away from Federation headquarters, since the Emerald Chain is preparing so-called “military training exercises.” But it’s Admiral Vance (Oded Fehr) who sides with Burnham to use Discovery to try and cure Georgiou. Georgiou has only hours left before she dies, so Discovery jumps to the planet and Burnham (Sonequa Martin-Green) beams down with her.

The pair are soon crossing the icy plains of the planet, a neat contrast to the very first scene of Discovery, where Burnham and Prime Georgiou are on a mission together on a desert planet. When they reach the coordinates the computer provided, they initially find nothing. Out of nowhere, a door appears in the snowy landscape, with a steward, Carl (Paul Guilfoyle), watching over it while reading a newspaper featuring a headline about Georgiou’s death. The kind of dialogue Carl shares with our heroes – including how his answers are always contrasting riddles – curiously reminds us of the way Ephraim always spoke to Culber and Stamets in the excellent Discovery novel “Dead Endless.” (If you haven’t read this book, please do so.) Georgiou, who’s temper for riddles fades fast and with nothing left to lose, decides to walk through the door. Based on the drawn-out goodbye between Burnham and Georgiou, as well as the goodbye Georgiou had previously shared with other members of Discovery‘s crew, we don’t think we’ll be seeing Georgiou in the Prime Universe again, no matter what happens in next week’s “Terra Firma, Part II.”

Once again we go through the looking glass. Yeoh is transported back to a key day in her Mirror Universe life: the day of the christening of the I.S.S. Charon, the huge, mini-sun-powered Terran flagship that we saw in the climax of season one. Now, we get to see the lead-up to Burnham’s betrayal of Georgiou, only referenced in dialogue before this episode. Now that she knows how her life is going to play out, Georgiou ultimately makes different decisions in this do-over. Instead of killing Burnham for her attempted coup, as she did the first time, Georgiou chooses to spare Burnham’s life, remembering her exchange with Prime Burnham in the Discovery’s rec room about killing being the coward’s way out. This is a huge moment for the former-now-current Emperor and shows what kind of impact the Prime Universe crew had on her character.

Considering the last 20 minutes or so of this episode is dedicated exclusively to the Mirror Universe, we see a lot of our normal cast in their Mirror Universe roles aboard Discovery. True to canon, we even see Ellen Landry (Rekha Sharma) as part of the crew; she’s a character we haven’t seen since her gruesome end in season one’s “The Butcher’s Knife Cares Not for the Lamb’s Cry.” While seeing our heroes in their alter ego evil roles, the real standout performance in the Mirror Universe scenes, unsurprisingly, is Sonequa Martin-Green as Mirror Universe Burnham.

If you read TrekNews’ reviews often, you’ve probably picked up on our love affair with Martin-Green and what we think of her next-level acting capacity. This episode only deepens that affair. The Burnham of the Mirror Universe is so different from her Prime self, and the differences aren’t always obvious. Martin-Green brings subtlety to this evil, plotting, and unstable character. The way she sits is different. The way she smiles is different; you know there’s a cold, calculating mind behind those eyes. The energy her gaze exudes reflects what is surely a terrible existence in the Mirror Universe. A more prominent example of Mirror Burnham’s fanatical character is when she’s faced with imminent execution after the failed assassination attempt, she looks near-crazed, anticipating her upcoming death with zeal and excitement in typical Terran fashion. It’s amazing how Martin-Green completely loses herself in this role. Luckily, Mirror Burnham is now at the mercy of Emperor Georgiou, so we’ll get to see more of her, and the rest of the Mirror Universe, next week.

Besides the Mirror Universe excitement, a substantial development happens with the data gleaned from the transmission Discovery picked up coming from the Verubin Nebula, the source of the Burn. Discovery‘s analyses shows that the ship at the center of the nebula is a Kelpien ship, the KSF Khi’eth. This is a remarkable discovery for Saru because, last he saw, Kelpiens were not a spacefaring species and had just recently entered a new stage of their evolution. As the crew finds out through a captain’s log, the Kelpien ship was tasked with investigating a dilithium repository in the same place as where the Burn ultimately started. Saru wants to investigate more but opts to not report the findings to Admiral Vance until they have more concrete evidence on which to act.

Taken together, “Terra Firma, Part I” marks Discovery‘s return to the Mirror Universe, and it’s a wild ride so far. With Georgiou now re-writing her own destiny, we’re pumped to see what changes she can make to the events in the Mirror Universe. Discovery‘s writers are continuing their well-practiced skill at subverting our expectations. Was there a familiar Starfleet ship at the heart of the Burn? Nope, but what ended up being there is interesting in its own right. Was the solution to Georgiou’s universe sickness rooted in medicine or science? Nope, it ended up being a random door on an uninhabited planet that allowed her to somehow travel across universes and time. If this show has taught us one thing, it’s not to try to predict what happens, and we love it for that.