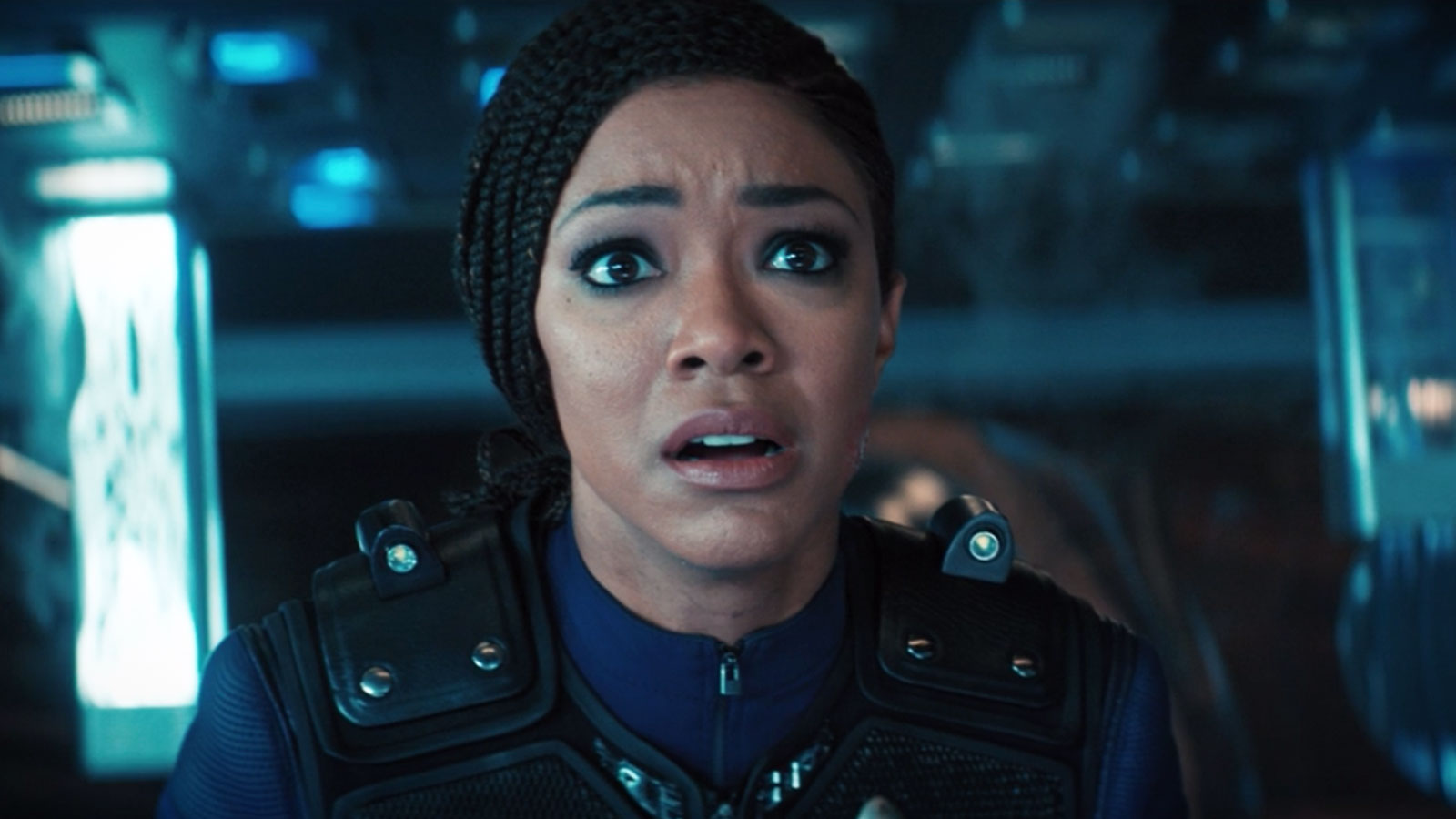 Following Star Trek: Discovery‘s fascinating two-part foray into the Mirror Universe, “Su’Kal” returns the show’s attention to investigating the Burn, while setting up the remaining two episodes of the season for a face-off between the Emerald Chain and Starfleet.

After pinpointing the source of the Burn following Book’s (David Ajala) use of Emerald Chain technology to locate a crashed Kelpien ship in the Verubin Nebula, Discovery jumps to the nebula but soon is faced with unpassable radiation. In a bold move, Book opts to take his nimble ship to scout the nebula, ultimately finding a safe place for Discovery to jump to where the Kelpien ship crashed. Remembering in the previous episode that Saru advised Book to wait for his moment to shine and earn his place within the Discovery crew, we think this dangerous scouting mission definitely accomplished his goal. The mission was worth the risk, as the planet the Kelpien ship crashed on was more than just a dilithium nursey like the crew thought; it’s a whole planet made of dilithium. Such a find is priceless in the post-Burn galaxy, making the planet an attractive target for the Federation and the Emerald Chain.

Saru (Doug Jones), Doctor Culber (Wilson Cruz), and Burnham (Sonequa Martin-Green) beam to the Khi’eth to investigate the one remaining life sign there, a life sign Saru determines was a child of the ship’s doctor, Issa (Hannah Spear). The radiation burns the crew observed from Issa’s distress call were actually signs of pregnancy, so the crew, especially Saru, are motivated to rescue the lone remaining Kelpien. Before debarking Discovery, Saru places Tilly (Mary Wiseman) in the captain’s chair, a first for the young ensign. While Tilly is nervous about the responsibility of command, a helpful and confidence-boosting conversation with Michael helps reinforce her resolve – and rest assured, her resolve is tested later in the episode. Culber and Stamets (Anthony Rapp) also share a suspiciously long goodbye, and Culber asserts that going down to the planet is part of his mission to “find” himself after coming back to life in the previous season.

As expected, this turns out not to be your typical away mission. The trio beam down to the ship and find themselves in a dark, foreboding Kelpien landscape. It’s disorienting for them and the viewer, and we noticed the lack of establishing shot of the Kelpien ship only reinforces the unusualness of the situation.

They also find their bodies altered to appear like different species. Burnham has the telltale markings of a Trill, Culber has the nose ridges and earrings of a Bajoran, and most strikingly, Saru is altered to appear human. This allows Doug Jones to go au naturel and ditch the Kelpien makeup. It’s fun and understandably strange to see Jones maintain the mannerisms of Saru while looking human, and it reminds us of other times Star Trek actors were allowed to ditch the makeup, such as Michael Dorn as a surgically altered Worf in “Homeward,” or most of the DS9 cast in “Far Beyond the Stars.” But it turns out there are a rhyme and reason for the away team automatically appearing as aliens.

The team beamed into an advanced holodeck, one designed to serve as an educational and child-raising tool for its resident adult Kelpien, Su’Kal (Bill Irwin). The program contains holographic teachers who help inform the away team exactly as to the program’s purpose, but decades of radiation decay means the program is malfunctioning. What’s more, Su’Kal’s development was stunted thanks to the harsh conditions he has lived in, so for all intents and purposes, he remains emotionally and mentally a child.

There’s much more to the holodeck program than meets the eye. Lurking within the program is a manifestation of Su’Kal’s greatest fear, a grotesques monster rooted in Kelpien myth. The monster was programmed into the holodeck because it aligns with a key Kelpien belief: to truly be free, you must conquer your fear. Without facing that fear, Su’Kal, and the rest of the away team, cannot leave. So far, Su’Kal has been able to ward away the monster by building stone totems, also like in Kelpien myth, but the away team will need to find a better solution if they want to complete their mission.

Back aboard Discovery, Tilly gets quite the test for her first command. Osyraa (Janet Kidder) has tracked Discovery to the Verubin Nebula, despite Starfleet reporting that the Emerald Chain was amassing near Kaminar, the Kelpien homeworld, in an attempt to lure Discovery there. The pirate leader is intent on getting control of the spore drive and securing the dilithium planet for the Emerald Chain. Gathering her confidence in the face of Osyraa and her far more powerful ship, Tilly coolly exudes bold confidence that Wiseman keenly portrays as Tilly making up for her own perceived shortcomings. It’s a façade Osyraa sees through, but Tilly never backs down.

Both ships cloak themselves in a game of tactical cat-and-mouse, but a disruption stemming from the planet itself disables the clocking devices on both ships, allowing Osyraa to have her way with Discovery. The pirate leader ensnares Discovery with tendrils protruding from her ship (not unlike the attack method used by the Pakled against the Cerritos and the Solvang in the season finale for Star Trek: Lower Decks), and Emerald Chain members beam aboard and assume control of the ship. With valuable Federation information now in her possession, Osyraa now has free rein to attack Federation headquarters.

But what was that disturbance from the planet? It was Su’Kal projecting a Burn-esque shockwave after coming face-to-face with his greatest fear. The monster is driven off thanks to a timely Kelpien lullaby from Saru, leaving the away team to reason that the lone Kelpien was somehow responsible for the Burn. This is hard to understand for both the away team (and the viewer, surely). Is one individual somehow projecting a near-instant galaxy-wide disruption? It’s a head-scratcher, for sure, and so far we only know that Su’Kal’s DNA must have somehow conjoined and adapted with the subspace radiation and dilithium permeating the planet while he was in utero. Okay…? Discovery writers have some major explaining to do to get us on board with this out-of-left-field explanation, but we have faith a more thorough explanation is coming soon. We’ve learned to expect the unexpected with this show.

With time ticking away until they succumb to radiation poisoning, the away team needs to head back to Discovery. Saru, totally enamored with the Kelpien culture he finds in the holodeck, proposes Michael stays to look after Su’Kal while Saru returns to Discovery. Michael pushes back, asserting that Saru would be distracted if he were anywhere else but with Su’Kal. Saru relents, and Culber also opts to stay, as he relates deeply to Su’Kal. Both men know what it’s like to be trapped in a world that doesn’t make sense to them. Michael, soon rescued from the planet by Book and a selfless act of heroism from Adira (Blu del Barrio), arrive near Discovery just in time to see it jump away under Osyraa’s control.

Taken together, “Su’Kal” is as much a Saru story as anything else. Seeing how Discovery‘s newly minted captain handles emotional distractions reveals shortcomings we didn’t expect to see in the Kelpien. While Saru remains emotionally intelligent enough to recognize these faults, perhaps he isn’t the best choice for Discovery‘s center chair? Let’s just say we wouldn’t be surprised if somewhere along the way somebody else ends up in the captain’s chair in a more permanent way. With two more episodes in the season, we are eager to see how Osryaa’s plan plays out, and if we can see some major fleet action as the lightly guarded Federation headquarters becomes the pirate leader’s next target. With Discovery‘s spore drive under her control, we hope she shows more of a villainous side than what we’ve seen so far.