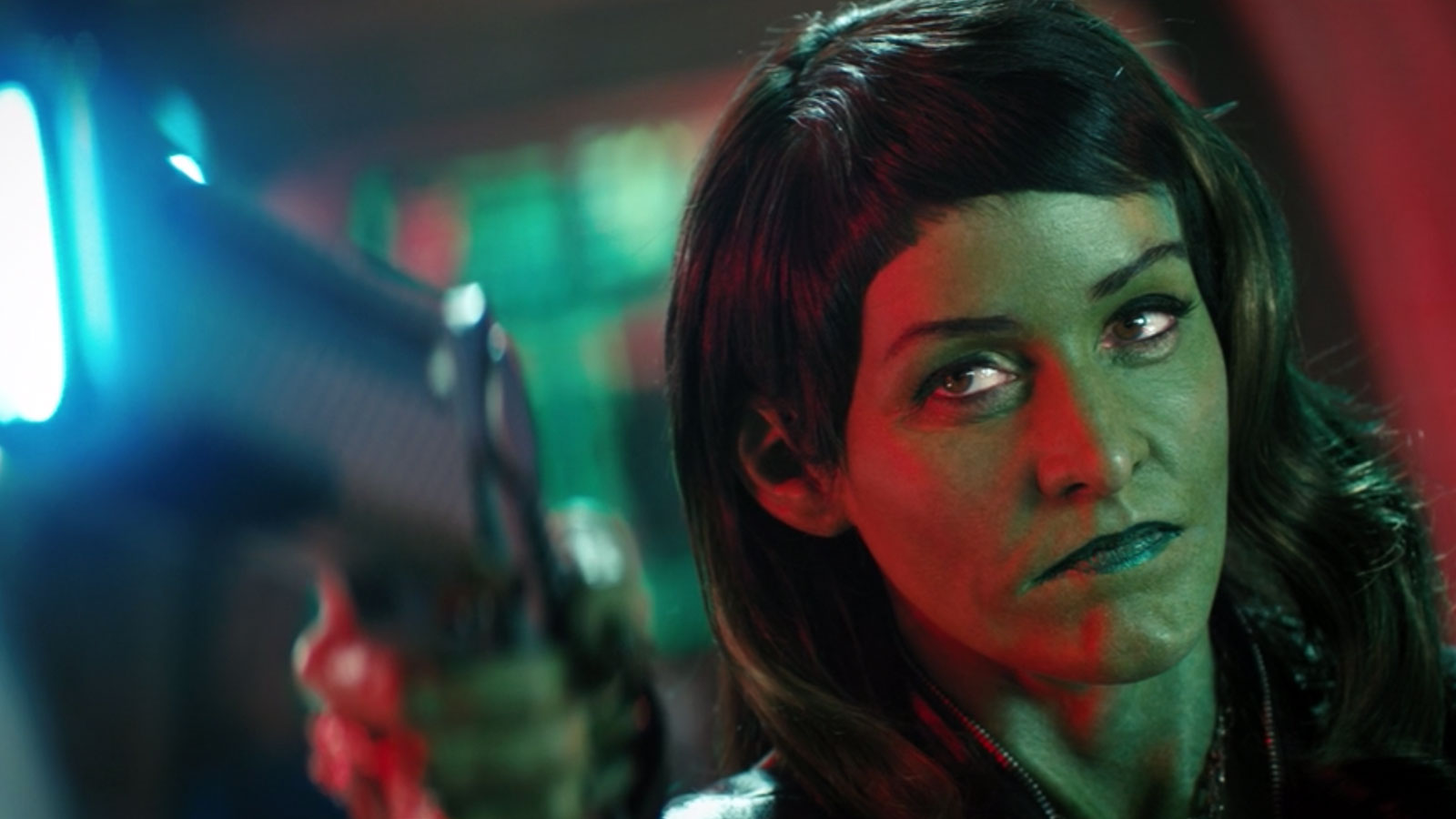 Back in 1966, the first episode of a low-budget sci-fi show called Star Trek premiered but was canceled after three seasons and chronically low ratings. Now in 2020, we mark the 800th entry in one of the world’s most beloved franchises. That entry comes as Discovery‘s penultimate season three episode, directed by Trek veteran Jonathan Frakes. It’s a good way to mark the end of 2020 if there ever was one.

Following Oysraa’s (Janet Kidder) capture of Discovery and subsequent plan to attack Federation Headquarters, Michael Burnham (Sonequa Martin-Green) and Book (David Ajala) attempt to catch up with their ship and rescue its captured crew, while Acting Captain Tilly (Mary Wiseman) and other bridge officers make a plan to take back their ship, and they get some surprising help along the way.

Using a hyper-fast courier tunnel that allows them to catch up with Discovery fairly quickly, Book and Burnham realize the pirate leader’s plan to infiltrate Federation Headquarters and vow to stop her via whatever means possible. In a fast-moving and exciting opening scene, Book rams his ship into Discovery‘s shuttle bay (picture a more explosive version of the shuttle crash-landing in the Enterprise-A in The Final Frontier). They are able to do this just before the ship enters FHQ thanks to the tentative permission of Admiral Vance (Oded Fehr), who doesn’t immediately catch on to the ship’s compromised nature. For all Vance knows, Discovery was being attacked by Osyraa’s ship and needed refuge within the Federation’s protective shield.

Soon after Discovery enters FHQ, Vance wises up its suspicious activity and orders the few Federation ships within the headquarters to prepare to attack. Osyraa uses this opportunity to reveal herself and her seemingly diplomatic intentions; she meets with Vance to talk about the Emerald Chain becoming a part of the Federation, where the two entities can benefit from a trade agreement. This would help normalize relations throughout the galaxy as various worlds still struggle in the aftermath of the Burn.

Osyraa comes armed with a litany of diplomatic concessions as she tries her best to seal the deal, and to her credit, she puts on a convincing performance, but we know better than to take her at her word. Vance crosses a line when he suggests that Osyraa allows herself to be tried for her crimes, as a way to illustrate Federation peacekeeping and judicial ideals and promote a strong alliance with Emerald Chain member worlds from the beginning. This is apparently the one line Osyraa won’t cross, which speaks to the fakeness of her diplomatic effort. She walks away from the negotiations and returns to Discovery, and we don’t fully know what she is planning. Ultimately, we don’t find out in this episode, but certainly, there are other, more interesting events unfolding on the captured ship.

We knew Osyraa wants to capture and learn about Discovery‘s valuable spore drive, and she enlists one of the best scientists around to help her: Aurellio, played by Discovery veteran Kenneth Mitchell. Seeing Mitchell in this role is a remarkable surprise, especially if you didn’t catch the sneak peek from last week. As viewers might remember, Mitchell played Kol in the first season of Discovery, as well as two other Klingons during the series’ run. He also had three minor voice appearances in Star Trek: Lower Decks. In August 2018, Mitchell was diagnosed with Lou Gehrig’s disease, which he publicly revealed earlier this year, which means he is confined to a wheelchair – just like his character in this episode.

Discovery‘s writers do a remarkable service to Mitchell when they wrote this role for him, as Aurellio is a moral conscience scientist who uses his disability as motivation for his scientific endeavors. We also think his character is more fleshed out than any other Mitchell has played on Discovery; Aurellio has a love of opera, which he uses to bond with Stamets, and he possesses humanizing traits that bring to light a different perspective on the post-Burn galaxy than the dire, survivalist characterizations we’ve seen thus far. While Aurellio is allied with Osyraa and appreciates her intentions as the leader of the Emerald Chain, seeing how she acts towards the Discovery crew makes him think twice about his allegiance to her. While he doesn’t take any action against her in this episode, we think he very well might be based on his reaction to Osyraa’s brutal murder of Ryn (Noah Averbach-Katz). More on that later.

Osyraa has also enlisted the help of Zareh (Jake Weber), the hardened courier seen back in “Far From Home.” If you remember, he was sentenced to survive the cold, harsh environment of the Colony after Saru didn’t allow his execution. Despite this act of mercy, Zareh has no love lost for the Federation, and he takes particular pleasure in helping hijack one of its most valuable ships. After allowing Discovery to be almost retaken during Osyraa’s visit to FHQ, we wouldn’t be surprised if Zareh’s days are numbered, especially as Osyraa gets more and more desperate in the face of the growing resistance from Discovery‘s crew. In our eyes, having Zareh under Osyraa’s command makes her character more appealing. The fact that she can command someone who we pegged as totally out for himself speaks to her bad guy leadership abilities, a trait we’ve noted as lacking in her appearances thus far.

These bad guys have a formidable force to face if they want to keep Discovery. After crashing into the ship, Book lets himself be captured so he can join the rest of the bridge crew, who are holed up under guard. Planning a way to take back the ship is another challenge Tilly never expected on her first command, but she is clearly up to the task, and vitally, she has the respect of her crew behind her. It’s during their escape attempt that we see much of the secondary bridge characters in action, such as Lt. Gen Rhys (Patrick Kwok-Choon), Lt. R.A. Bryce (Ronnie Rowe Jr.), and Lt. Keyla Detmer (Emily Coutts) luring the guarding Emerald Chain soldiers into a trap. Seeing the crew work flawlessly without Saru (Doug Jones) or Burnham is a treat, and we appreciate their moment to shine under Tilly’s command.

So yes, we mentioned that Ryn meets his end in this episode, so let’s backtrack just a little bit. After crashing into Discovery‘s shuttle bay, Book and Burnham split up to accomplish different tasks in their attempt to recapture the ship. In case they don’t see each other again, the pair share a lovely, if perhaps overly dramatic, moment where they profess their love to each other. If someone does deserve a romantic happy ending, it certainly is Burnham, but we would have liked it if we had seen more of the pair together over the course of the season to help build-up to this inevitable conclusion. We still bet that other media, such as novelizations or comics, will eventually help fill in the gaps in their relationship, including the year the two spent together being couriers.

Once the bridge crew is free of their guards, Book and Ryn heroically opt to hold off any reinforcements while Tilly leads the bridge crew to the bridge. The defending pair are overpowered and brought to Osyraa on the bridge, where the pirate leader opts to make a lesson of Ryn and vaporize him in front of Book. Farewell Ryn, we hardly knew ye. Strangely, Book and Ryn getting overwhelmed by the Emerald Chain happening off-screen, and it would have made Ryn’s eventual death more meaningful if we saw him and Book put up a valent defense. This exclusion certainly is a misstep on the part of Discovery‘s creative team. Perhaps this was a scene cut for time?

While all this is happening, Burnham goes all John McClane around Discovery (complete with running around barefoot) to try and find Stamets (Anthony Rapp) so Osyraa can’t use him to control the spore drive. Unfortunately for her, she gets stabbed in the leg thanks to a particularly combative Emerald Chain soldier, which only complicates her mission but makes her appear even more of a badass. While she sneaks around in the Jefferies Tubes (and probably learns what a TV dinner feels like), she sends a mayday message to her mom, who we know is alive and well and living as a Qowat Milat, explaining that Discovery is in dire straights and that Burnham may not see her again. Our bet is that Gabrielle will find some way to send help to FHQ; otherwise, this protracted goodbye does little but affirm Burnham’s awareness that her mom is alive and well.

Burnham does find Stamets, but the engineer is unwilling to leave Discovery while his husband, along with the other away team members, are still stranded in the Verubin Nebula. Despite Burnham’s protestations, Stamets refuses to willingly leave the ship, so she has to incapacitate him to get him to a Galaxy Quest-esque escape pod. In a final act of defiance, Stamets curses Burnham out for sending him away, reminding her that he and the rest of the crew followed Burnham into the future out of loyalty, and this is how she repays them? For his part, Anthony Rapp holds nothing back as Stamets rages at Burnham, and we certainly understand why the character is so angry. But, it does seem that the old Vulcan maxim about the needs of many plays a role in Burnham’s dilemma, and we can’t blame her for opting to send Stamets away if it means Osyraa loses control of the spore drive.

With the spore drive safe from enemy control, the rest of the episode focuses on Tilly and company’s effort to get to the bridge, where presumably they’ll face off against Osyraa, Zareh, Aurellio, and the remaining Emerald Chain members. Along the way, a friendly face opts to help them: the soothingly voiced Zora, the sentient computer aboard Discovery born from the Sphere Data. She appears here controlling a number of DOT-23 robots. She offers to help the crew take back the ship, which we think is a perfectly climatic way to continue helping her adopted family. First, she offered Saru the idea of a movie night to help relieve tension among the ship’s complement after traveling to the future, and then she suggested Georgiou seeks help from the Guardian of Forever to cure her temporal sickness. We are super excited to see how Zora is able to assist our heroes – and might it tie into the ever-mysterious way Discovery is seen abandoned in “Calypso” – which, let’s remember, aired way back in November 2018.

Taken together, “There is a Tide…” serves as an effective prelude to what we are assuming will be an epic season finale, and there are many questions left to be answered. Now that Osyraa’s “negotiations” have failed, how desperate will she become? Will Burnham’s mom be able to send help to save the day, and will other allies we’ve met this season, like the Trill, come into play? How does Discovery save its away team from the dilithium planet, and is there more to the Burn than what we learned in the previous episode (we hope so!). We’ll only have to wait a week to find out.