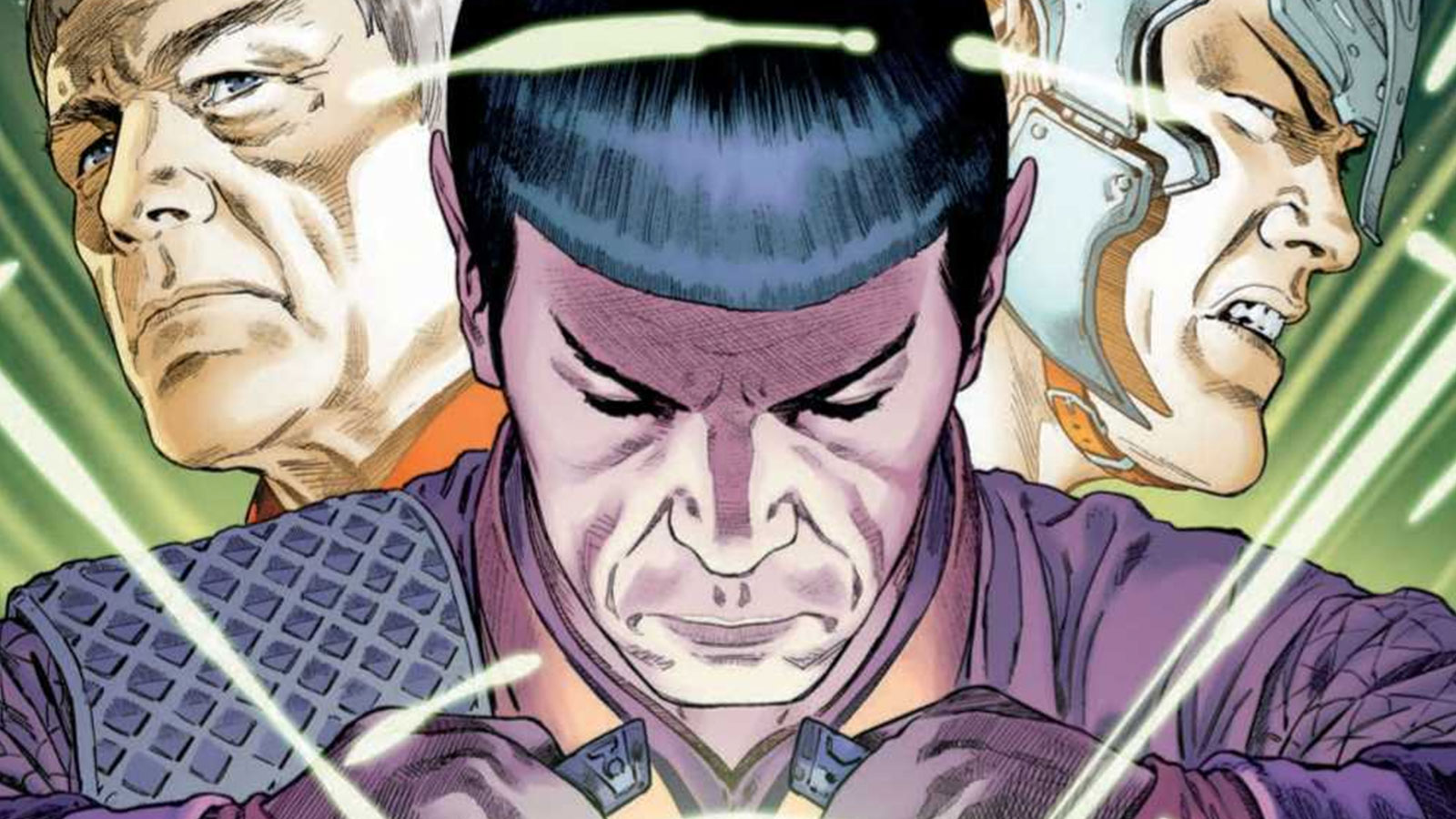 When the Enterprise lands on Vulcan for a seemingly routine stop, Spock is pulled back to a pivotal moment in the planet’s timeline: a civil war that splits Vulcans in two and is supposed to lead to the birth of the Romulans. However, when Spock is forced to confront and attack one of the war’s key players, his actions threaten to undo the entire history of both the Vulcans and the Romulans.

Spock has had quite a ride in IDW’s Star Trek: Year Five. The personal highlight for me was getting to see him run for a planet’s president but in this latest two-part story writer Brandon Easton, Spock’s guardian for this series takes him to a place even more important than planetary leadership! It’s no secret that our favorite Vulcan has always been a “big ideas” character. Ever since his debut fifty-five years ago his heavy words and his unpredictable ways have become go-to thought pockets in pop culture. There’s always a lesson to be learned in a Spock story and this tale continues that time-honored tradition. The remaining issues of Year Five are set up to be an action-packed, universe-shattering chain of events but before we get there, it feels right and it feels true to Star Trek’s spirit to take in a story that makes us pause and reflect.

In Star Trek: Year Five #20 Spock is pulled back in time to the civil war among Vulcans, a war that is fabled to cause a fundamental rift in the civilization and lead to the formation of the Romulans. The war rages on with one side who has deemed emotion as the root of all evil and another who believes emotion is our greatest strength and should be favored to logic. The former side, led by Surak, who we know as the founding leader of the Vulcans, is conquering those who oppose them and condemning them to reeducation camps in order to eradicate emotion from them. Spock runs into Surak while he is hunting down a group of opposers. Despite initially being conflicted, Spock sides with the anti-Surak group, and together they escape Surak’s captivity. Spock learns that those fighting Surak are hunting down a powerful artifact that could help them turn the tide in their losing fight against Surak and his army. This hunt soon puts him directly in front of Surak, who he nerve pinches, and as Surak falls to the ground, Spock realizes he could be breaking the history of not one but two civilizations.

On board the Enterprise, a Spock-less crew finds itself under attack from a battalion of ships, and Gary Seven appears with a solution but has a demand of his own. For a way out of this quagmire, Kirk has to surrender himself to Gary.

Brandon Easton’s Spock stories are a special reward on their own in the cornucopia of joys that Year Five provides. In this issue, he has the unenviable job of providing a thought-provoking story worthy of Spock’s time, while simultaneously unraveling the tapestry that will lead to the tragic event we saw back on the first page of Year Five issue 1. Easton, thankfully, has come to play on both fronts and we the readers are better for it.

Unsurprisingly, Easton, much like the hero he writes for, is a big ideas writer. First, we see Spock experience Surak, the man whose teachings Spock has built his life around, in his time and not the version of Surak softened and lionized in Vulcan history books. Turns out the power-hungry Surak forcing his logical way of life by torturing his captives in re-education camps might be more of a Genghis Khan than a Jesus Christ. That’s one strong conflict for Spock and one meaty story idea for us to digest.

Second, in this story, we see Spock, a product of two civilizations – both human and Vulcan – experience an event that will be known as the first war between two civilizations due to a difference in ideologies. Spock landing at the root of the rift between emotion and logic and having to choose between them is intriguing enough but the revelations cut even deeper for a reader with some knowledge of Easton’s writing. There’s a bit of every artist in their work and when Easton, an African American writer, pens a story involving a mixed-race alien who quotes Abraham Lincoln on occasion is caught in a civil war, it’s clear that he is aware of the power being generated through his story. Of the multiple Year Five spinoffs that I hope IDW is working on, one that feels essential is an Easton-scripted series of Spock tales filled with big ideas like these.

Silvia Califano shines with her pencils in this issue. She and colorist DC Alonso are a winning duo and make panels that are full of dialog and exposition flow easily over the eyes. There’s very little typical comic book action in this issue but Califano and Alonso ensure their art keeps you turning the pages with interesting glow and color mixes. The story has an overall general repeating pattern of two people talking to each other which is a trademark of many great Star Trek stories but when you don’t have the acting gravitas of a Nimoy or a Shatner, Year Five is lucky to have Califano and Alonso.

Brandon Easton packs a lot for a story that’s limited to forty-four comic book pages but his battle-tested skill of serving up big ideas without compromising on the fun, and Silvia Califano’s stellar art, make this an adventure not only worthy of your time but also worthy of Spock himself.