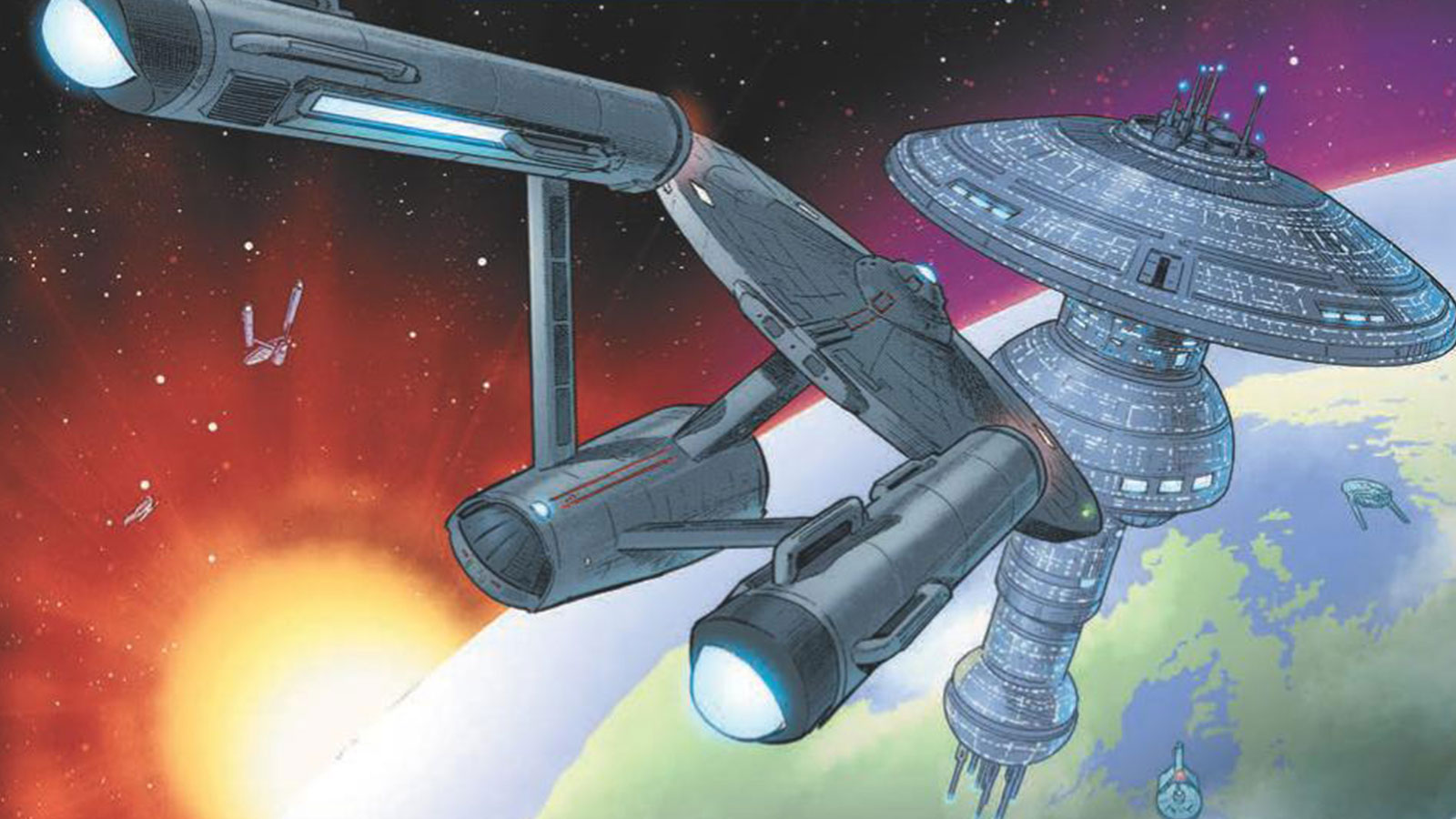 After a five-year journey with consequences that have reverberated to the ends of the universe, the Enterprise returns home, not to a grand parade, but to an angry Starfleet. Aboard the ship, Captain Kirk is finally ready to step down from the chair and transfer it to capable hands but unknown to him his crew, especially a devastated First Officer, have different plans.

Star Trek: Year Five writers Jackson Lanzing and Collin Kelly return for their final arc in fine form. With artist Stephen Thompson’s breathtaking pencils by their side, they give our heroes sparse moments of closure and respite before the all-consuming forest fire approaches.

Year Five’s timing is impeccable. Right around the time when it became clear that a presidential impeachment was imminent, Year Five told the story of Spock running for a planet’s president. Then, at the beginning of this year, when our planet was being consumed by Covid-19 with no end in sight, a story originally pitched months before Covid-19 took over the world, Year Five’s two-part tale about a planet being ravaged by a pandemic, released. Now Covid is in retreat and the world is getting back to normal just as Year Five brings the Enterprise home to Earth for the series’ last three issues. It’s either just a chain of coincidences or the series’ team of writers and artists have a magical crystal ball they’re not telling us about.

The Enterprise now sees Earth on its view screen but before they land, Captain Kirk orders for a long-awaited recruitment ceremony. Bright Eyes, the rescued Tholian child, who went from a scared, noncommunicative passenger to a crew member whose assistance was critical in getting the ship home, is now a member of Starfleet!

Speaking of Starfleet, the crew learns soon upon their landing that Starfleet is anything but happy with their actions during this last year. It’s time for answers. Kirk leaves the ship for a personal trip and sends Spock, who is recovering in silence from the devastating revelations of his encounter with his Vulcan ancestors, to the mission debriefing instead.

Year Five’s writing team consists of a group of stellar writers who have woven the series together round-robin style with each of them taking turns telling a different short story and also laying the groundwork for a large narrative. The series’ main duo, Jackson Lanzing and Collin Kelly, whose last story was the excellent one-shot origin of Gary Seven in Year Five #17, are back for the final arc and after putting our crew through hell, they decided to show mercy by letting the crew take a breather.

There isn’t any action in this issue per se but the drama is aplenty, and it’s full-on A Few Good Men “You can’t handle the truth!” levels drama. Because that’s what happens sometimes after long journeys. There are lingering questions and unexpressed emotions and pending decisions for the next journey, all of which need closure. Lanzing and Kelly throw us for a loop by not giving our heroes the predictable festive return. Instead, we see them try to find very quick, very abrupt moments of quiet and peace in between having to suffer through mandatory, bureaucratic rigamarole and long overdue confrontations. At least one of them gets to take a nap.

Unsurprisingly, artist Stephen Thompson’s pencils make even the more passive, restful moments pleasant and interesting. An issue like this, which is mostly people talking to each other, is more difficult to make a page-turner in some ways than an issue full of exploding starships and Bat’Leths flying about. But Thompson delivers and then some thanks to an assist from Charlie Kirchoff’s sparkling colors.

The crew looks great, the landscapes are awe-inspiring, and if Thompson thinks that us attentive readers missed his homage to the team of Year Five writers and artists in the first two pages of this issue, he should think again.

Year Five #22 is the pit stop before the final lap of the race. It is the quick swig of the drink you take before the fourth quarter. Writers Jackson Lanzing and Collin Kelly and artist Stephen Thompson deploy masterful dialog and beautiful art to make the calm before the storm brief but eventful.

But make no mistake, there’s a hell of a storm coming.