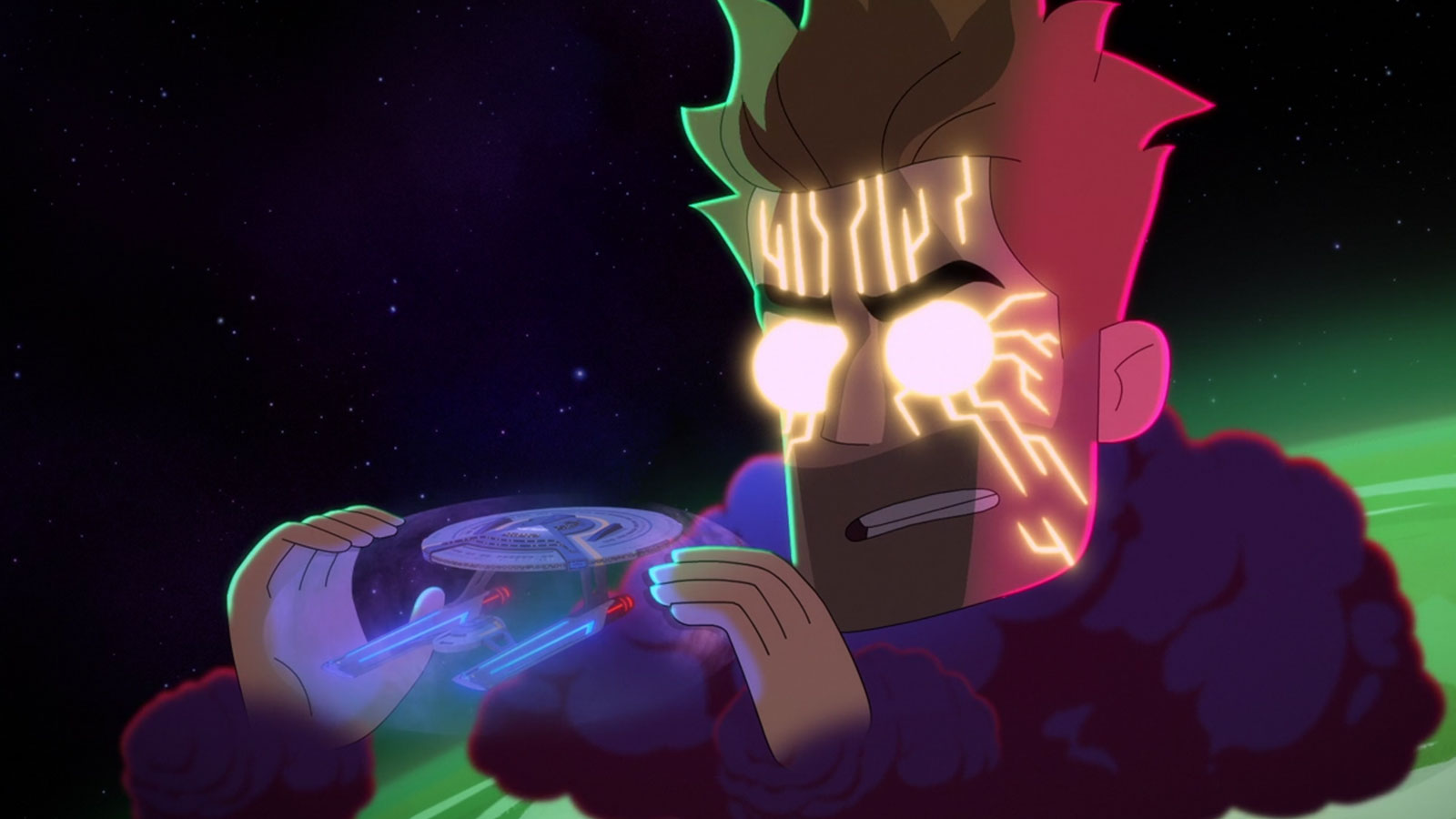 Picking up three months after the excellent conclusion to Star Trek: Lower Decks season one, “Strange Energies” wastes no time in continuing the adventures of the Lower Deckers while delivering the same self-reflective humor we’ve grown to love about this show.

After trying to work with her mother instead of consistently defying her wherever possible, “Strange Energies” finds Beckett Mariner (Tawny Newsome) dealing with her issues on the holodeck – a common coping mechanism for her, apparently. The holodeck simulation (Mariner trying to escape from a Cardassian prison) serves as a handy expositional setting for viewers who may not remember that Mariner and her mom are trying to repair their dysfunctional relationship, or that Mariner thinks Boimler (Jack Quaid) abandoned her to serve on the Titan. Of course, what’s a Lower Decks scene without some fun references to other Star Trek shows, and those who have a special fondness for TNG’s “Chain of Command” will find a lot to love here.

Back in the real world, the Cerritos is completing second contact duties on the planet Apergos, including giving the inhabitants a phone number subspace communications code which they could use to contact the Federation. Before leaving the system, Mariner wants to power wash some of the capital city’s buildings, which has never been done since Apergos’ industrial revolution. Mariner hopes the people recognize how nice their city can be when they clean up after themselves, which is surely a thinly veiled critique by the writer (and series creator) Mike McMahan of America and how pollution has run amok since our own industrial revolution. Wanting to be the “cool mom,” Captain Freeman (Dawnn Lewis) begrudgingly allows it. Ransom (Jerry O’Connell) witnesses this clear unprofessionalism, which only furthers his disdain for how Freeman has been focusing on her daughter and not him.

Ransom’s feelings about the new mother-daughter relationship are taken to the next level when Mariner accidentally unleashes a strange energy on the planet, which infects Ransom and gives him god-like powers a la Gary Mitchell from “Where No Man Has Gone Before.” With his newfound ability and unleashed aggression, Ransom uses his power to threaten the Cerritos itself. Recognizing that Ransom’s feelings about the forced relationship between Mariner and Freeman are legitimate, Captain Freeman vows to return her relationship with Mariner to one that’s more professional. To calm the Ransom deity, Freeman praises her second-in-command, which appeases him long enough for Mariner to get a few kicks into Ransom’s… er… “neutral zone,” and a final crush of a boulder on Ransom’s body by Doctor T’Ana (Gillian Vigman) stops the entity once and for all. Kirk would be proud!

Rutherford (Eugene Cordero), meanwhile, is still adjusting to life with a new implant after the explosive events of the season one finale. While some aspects of his personality have changed, such as his newfound fondness for peaches, Tendi (Noël Wells) says she is worried that if he continues to experience these changes, he might succumb to a deadly medical complication. In reality, she’s actually worried that he might not want to be her friend anymore.

For our money, this is more of the charming and innocent Tendi that we liked so much in season one, even if she did take her obsessive focus on Rutherford a little too far. While there are only a few subtle hints that she is interested in Rutherford beyond friendship, for now, she is just making sure her friend stays her friend. We must give kudos to Mike McMahan for not bulldozing his way into making this pair a couple. If it does happen, it likely won’t be in a way we expect, nor will it have happened quickly. It can be tough in a fast-paced 24-minute show to give plot threads breathing room, but it seems to be happening with Tendi and Rutherford.

With the crisis on board the Cerritos solved until whatever happens next week, we get a brief look into what Boimler is doing on the Titan. As the ship fights off Pakled vessels, Riker (Jonathan Frakes) orders his ship into an anomaly, where the crew experiences… gluonic disruption. We can’t wait to find out what this means next week!

As far as season premiere episodes go, “Strange Energies” gives us a lot to look forward to the return of Mariner’s dysfunctional relationship with her mom (seeing the pair “fake” a more normal relationship would get tiresome); how the Titan finds its way to working with the Cerritos; how Tendi and Rutherford’s relationship expands and reflects the subtle “will they, won’t they?” mentality the show seems to be adopting; and how Ransom falls back in step with Captain Freeman.