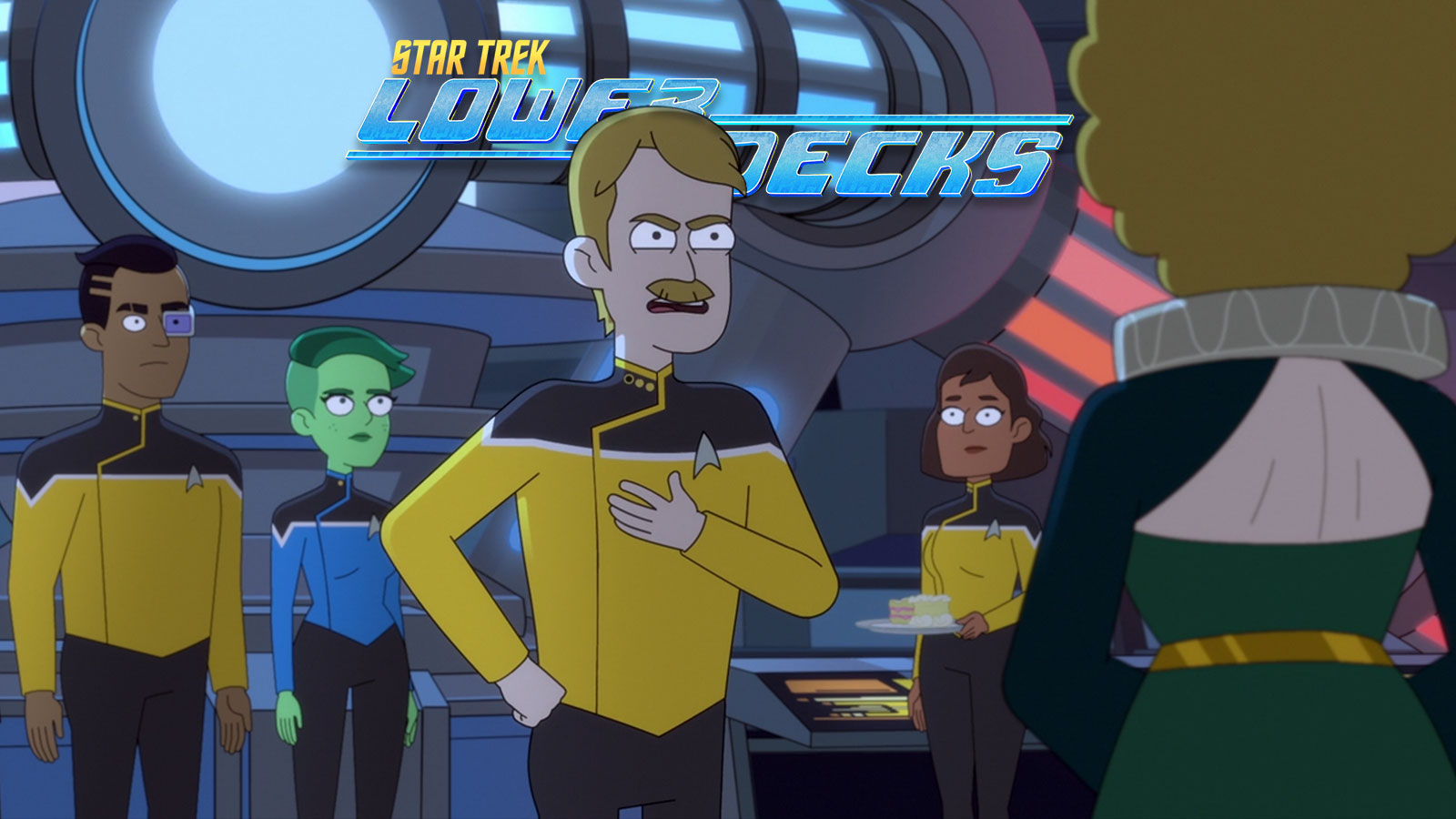 In this week’s episode, not only does Lower Decks present its own spin on the annoying, manipulative parent vibe first witnessed in The Next Generation‘s relationship with Counselor Troi and her mother, Luxanna, but one of our Lower Deckers surprises with how much he has grown as a Starfleet officer, even when it means stabbing a friend in the back.

The Cerritos’ chief engineering officer, Lt. Andarithio Billups (Paul Scheer) has a bit of a past. Apparently, our good engineer is part of a royal family, and his mother, Queen Paolana (June Diane Raphael), always thought his Starfleet service was a waste of time. So, like any caring mother would do, she fakes a technical problem on her ship so she can get her son aboard and try to trick him into coming back to the royal family to assume his place as king.

This is quite the story for Billups, and while one may raise an eyebrow at Lower Decks focusing on a senior officer – generally not the show’s style – we actually came around to really liking this story thanks to its presentation within the Lower Decks framework. While Lower Deckers don’t know much about Billups and his family issues, the show presents this storyline as if the viewers were cognizant of it all along – like it’s just another episode in an arc of episodes regarding Billups and his mom. The bare minimum is given in the way of exposition, which is fine: we think viewers will easily be able to grasp Billups’ situation in the head-first way the show uses.

So, Queen Paolana gets her son aboard a ship, the Monaveen, a beautiful vessel styled after the species’ Middle Ages-esque culture. It seems the animation team really let loose on the design of this vessel, as it’s remarkably different from any other ship in Star Trek, and we appreciate how a culture’s social structure manifests within their spacegoing vessels.

Accompanying Billups to try and repair the Monaveen is Rutherford (Eugene Cordero), who at first is nervous to venture outside his comfort zone and board an alien ship. But after encouragement from the energetic Tendi (Noel Wells), the engineer does indeed jump at the chance to stretch his legs, so to say, although we soon see that this decision causes quite a bit of heartache for our favorite Orion.

“You need to get outside your comfort zone.”

“But I love my zone. it’s so comfortable.”

In a desperate bid to get her son back to the royal family, Queen Paolana fakes an explosion aboard her ship that seemingly claims her own life, as well as Rutherford’s. Believing his mother dead, Billups sees no option but to take the plunge into royal life – a plunge only completed by the Royal Copulation. Yes, Billups needs to lose his virginity.

While losing his virginity is emotionally troublesome for Billups, perhaps as equally as emotionally devastating is Tendi believing her encouragement for Rutherford to step out of his comfort zone ultimately led to his death. It’s only when Tendi tracks Rutherford’s implant to someplace else on the alien ship that she discovers he (and the queen) are actually alive and that the explosion was just a lure to get Billups back into the family. At the end of the episode, while she feels relieved her friend is alive, we see a not-so-subtle hint of how dependent Tendi has become to Rutherford’s friendship. If he ever were to actually die and leave her alone, would she be able to handle it? We bet this is a situation Tendi will have to face later in the season, and we’re super curious about how she will handle it.

Meanwhile, Boimler (Jack Quaid) and Mariner (Tawney Newsome) team up, albeit to Boimler’s chagrin, for an escort mission. Who, or what, are they escorting? An evil computer, AGIMUS, played by Star Trek veteran Jeffrey Combs. AGIMUS needs to get to the Daystrom Institute on Earth after the crew of the Cerritos removed it from a civilization where it caused a century-long war. But nothing ever goes as planned, and the three of them crash land on a planet where they then have to fight for survival amid an inhospitable wasteland, dangerous creatures, and the computer itself trying to regain control by any means possible.

We know Mariner is a great boots-on-the-ground officer, but this episode isn’t a chance for her to showcase her abilities, it’s Boimler’s. Apparently still tender over Boimler’s time on the Titan, even though we thought those ill-feelings dispersed at the end of “An Embarassment of Dooplers,” Mariner still gets angsty when he brings up his experiences on that ship and how they have helped prepare him for their current survival situation. But it isn’t just Boimler pretending to be a more hardened officer; he really does showcase a better resiliency in stressful situations, which is a far cry from the Boimler we met in the series’ first episode. In that sense, it’s remarkable how far the character has come.

Nowhere is this point more evident than when Boimler appears to side with AGIMUS when the machine reveals that Mariner asked Ransom to reassign Boimler to this escort mission. Boimler, presumably allied with AGIMUS at this point, opts to try to use the machine to power up an abandoned starship. Such a plan requires AGIMUS to believe Boimler was on his side and not Mariner’s, and therefore Boimler did something we didn’t know he had the guts to: betray (albeit temporarily) his friend. It’s a risky plan, but Boimler shows he can pull it off, much to Mariner’s eventual surprise and pride. Instead of powering up the shop with AGIMUS, Boimler tricks the machine into using its power cell to send a distress call and ultimately get rescued.

Like we mentioned before, we thought Mariner’s feelings about Boimler serving on the Titan were resolved, so by the show bringing it up again and serving as a point of contention between the two ensigns, we can’t help but think that this tension between Boimler and Mariner will still have a major part to play in this season. And we wouldn’t be surprised if Boimler harbors ill feelings for Mariner after this episode, as she totally stepped out of line when she asked if Boimler could be reassigned to the escort mission. On that note, why would Ransom simply take Mariner at her word when she asserts that Boimler isn’t ready for dangerous away missions?

Anyway, we’re thrilled that the Lower Decks crew were able to fit Jeffrey Combs in this show, which makes it his fourth franchise series appearance after Deep Space Nine, Voyager, and Enterprise. Despite the high-profile guest star, this episode is more notable for its focus on fleshing out a senior officer and offering threads that we presume will lead to the season’s conclusion. Will Tendi face a situation where she has to be without Rutherford? Will Boimler’s time on the Titan reach some kind of explosive or dramatic finish with Mariner? Only time will tell.

Lower Decks returns next week with the eighth episode of season two “I, Excretus” on Thursday, September 30th.