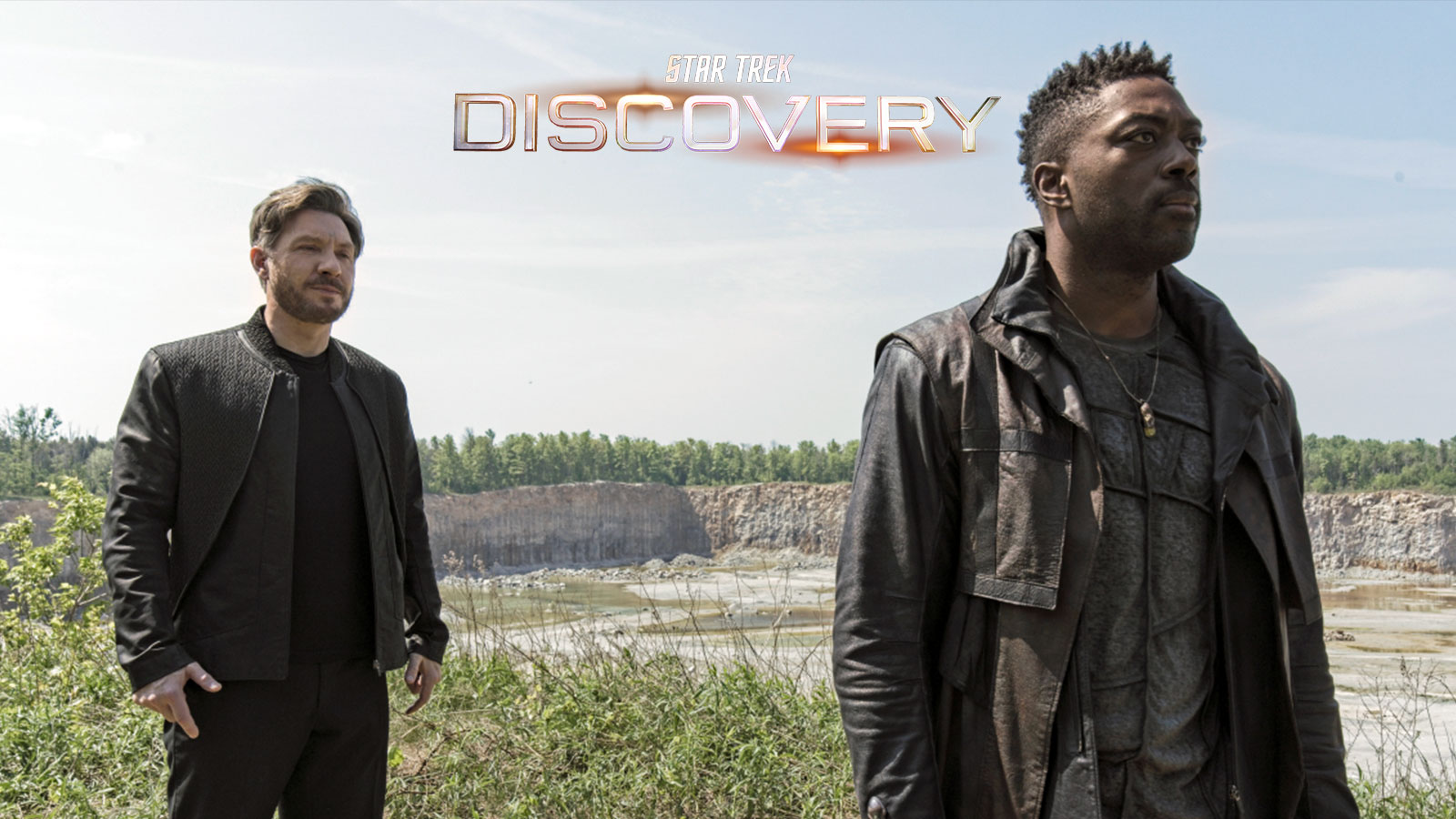 The Federation jumps into action following the arrival of a second, more powerful Dark Matter Anomaly, sending Discovery to the far reaches of the Milky Way on their way to visit Unknown Species 10 — but that’s not even the best part of this episode.

In typical Discovery fashion, interpersonal conflicts are not forgotten despite galactic stakes, and “The Galactic Barrier,” despite its larger-than-life name, will likely be remembered mainly for its exploration of a key backstory: Ruon Tarka’s (Shawn Doyle). Throughout the season, Tarka has hinted why he wants the DMA’s power source so badly: to jump across universes and find his friend. But so far, we haven’t known who this friend was, how Tarka lost him, or which universe he wanted to go to. That all changes in “The Galactic Barrier.”

Knowing they need to get outside the galaxy and contact Unknown Species 10-C, Cleveland Booker (David Ajala) and Tarka realize they need programmable anti-matter so their ship is protected from the vitriolic elements that comprise the barrier. Tarka knows exactly where to find such material – the planet where he escaped the Emerald Chain after years in their custody. On this planet, Tarka met and started working with Oros (Osric Chau), a fellow scientist who was technically working on a dilithium-alterative engine (remember, this flashback takes place in a post-Burn galaxy), but actually spent much of his time creating an interdimensional transporter. Despite a standoffish introduction, the two captives soon developed a deep, platonic friendship, working on science problems together amid their captivity.

Oros asserts that he knows of a place they could escape to, a different universe, called Kayalise, that he describes as a paradise, a place beyond suffering – certainly an attractive place for prisoners like Tarka and Oros. It’s a wild theory, and this work consumes them and deepens their bond. On the day they try to use the transporter they built, the technology goes awry, leading us to learn a dark secret about Tarka.

Apparently, when he and Oros first started working on the transporter, Tarka had told the guards about the secret project and was promised freedom if Osyraa gained the technology for herself. However, Tarka never anticipated the bond he ultimately built with Oros, and after a tussle with Emerald Chain guards, an injured Oros tells Tarka to escape while he can. Tarka, immensely guilty about betraying his friend, painfully removes the Emerald Chain trackers from their necks and vows to come back for him. Before they part, Oros tells Tarka he forgives him for his actions, saying he would have done anything to gain freedom, too. As Tarka explains to Book, he has reason to think Oros did eventually use the transporter to escape to Kayalise – leaving a guilt-ridden, heartbroken Tarka without his friend and needing to find a way to Kayalise himself.

So, viewers are now up to speed on Tarka’s passion for getting to the heart of the DMA and capturing its power source. Tarka’s story is heartbreaking, well-acted, and paced throughout this episode perfectly. Moreover, this story is absolutely in line with Discovery’s penchant for showcasing the power (and pain) of heartfelt friendships. To know now that Tarka is driven by intense guilt for betraying, and then abandoning, his friend is sweet, sad, and adds a fantastic layer of depth to the character.

Of course, Tarka and Book aren’t the only ones seeking the Galactic Barrier, as the Federation assembles a diplomatic task force to help open the door to communicating with the 10-C. After onboarding diplomats and politicians (including language expert Doctor Hirai (Hiro Kanagawa and Earth’s General Ndoye (Phumzile Sitole) at Federation Headquarters, Discovery hastily journeys to the barrier so the Federation can contact 10-C and avoid the new DMA from destroying something else. As has been a recurring theme of this season, politics plays a role in this disaster response, as President Laira Rillak (Chelah Horsdal) opts to come along with Discovery, thinking her diplomatic skills will be useful when they encounter 10-C. This puts Captain Michael Burnham (Sonequa Martin-Green) in a bit of a situation, as the last time the president tagged along on a mission, the politician openly questioned the captain’s orders and generally complicated a rescue mission (even though Rillak’s skills were effective in saving lives).

To Burnham’s credit, she opts to address this concern openly with the president before Discovery leaves, asking her if they could reach an agreement about roles and responsibilities. Such openness is perfectly in line with what we know about Burnham’s centered emotional intelligence, and Rillak responds in kind, saying that she’ll respect Burnham’s command of the ship, but will maintain her control over the political and diplomatic aspect of the crucial mission. It’s a good start, but will such equilibrium last?

Discovery reaches the Galactic Barrier, and as expected, it’s a far cry from what we saw of the barrier in The Original Series. Passing through the barrier is extremely dangerous, and can only be done by fitting Discovery into a cell-like bubble that passes through the barrier along a current, like blood cells flowing through veins. Even then, it’s a difficult journey, only possible through intelligent science-ing by Paul Stamets (Anthony Rapp) and keen piloting by Lt. Cmdr. Keyla Detmer (Emily Coutts).

A wrench gets thrown into the mission when Rillak receives an urgent message from the far-away Admiral Charles Vance (Oded Fehr), informing Discovery that the DMA has moved again, this time toward the Alpha Quadrant with Earth and Ni’Var square in its sights. It’s devastating news to Burnham and Rillak, who are the only ones to view the message at first. Rillak, we learn, has a partner on the Moon, and Burnham of course has deep ties to both Earth and Ni’Var. Rillak urges Burnham to abort the mission and head home to help with the fallout from the DMA’s actions, but Burnham asserts Discovery must continue its mission to find 10-C and possibly stop the DMA. Burnham also asserts they should tell the crew this news, but Rillak disagrees, thinking they, and the Federation delegates on board, can’t afford to be distracted considering the difficult journey through the barrier. For now, Rillak gets the final word on this issue, so the secret stays between the two women as Discovery heads out of the galaxy.

In the thick of the chaotic crossing, the bridge crew opts to think out loud of what they are looking forward to doing on Earth when they get home, which seems like a painfully contrived way to generate tension around Burnham and Rillak’s knowledge about the DMA’s new course. In any other scenario, could you imagine the bridge crew spontaneously voicing their thoughts like this?

The ship does make it through the barrier with mere seconds to spare before Discovery falls apart, leaving the crew to warp their way the rest of the journey to the hyperfield that supposedly houses Unknown Species 10-C. After a heartfelt conversation about how the DMA is personally affecting their lives, Burnham and Rillak agree that now is the time to tell the crew about the new DMA threat; the crew takes the news well and more urgency is added to their mission.

Normally, we’d expect Discovery to arrive at the hyperfield in the next episode, but Burnham’s line about sending a scouting party to a nearby planet outside the hyperfield makes us think that is where the next episode is heading. It seems to be taking a bit of time for this show to ramp up to actually tackling Unknown Species 10-C, and we hope the wait is worth it. In any event, “The Galactic Barrier” proves to be a great episode thanks to Shawn Doyle delivering a prime performance as the audience learns more about his character’s motivations. Seeing if Tarka reunites with Oros is now one of the most anticipated things we want to see this season.