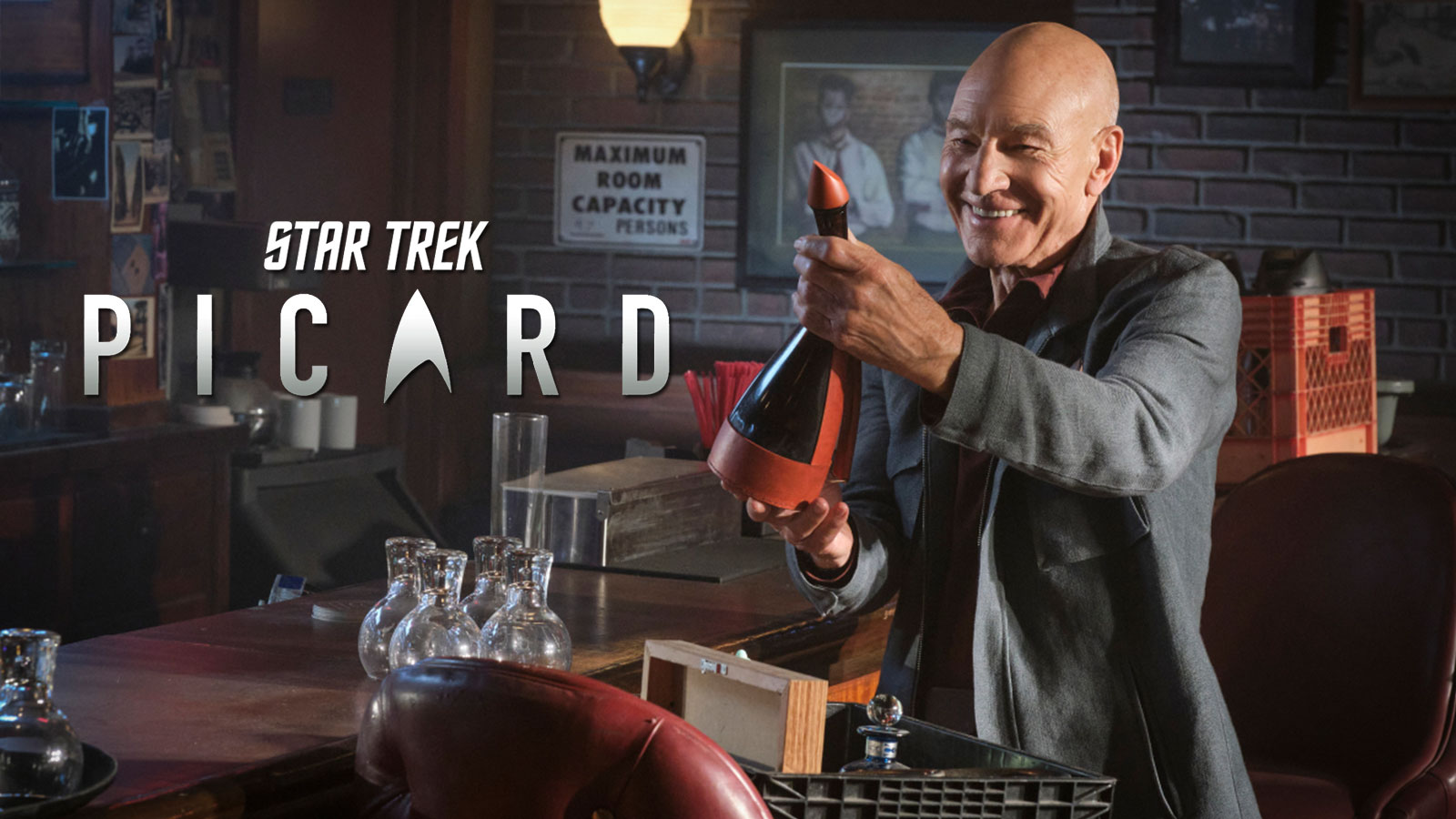 This week’s Star Trek: Picard raises some major questions about the admiral’s mission in 2024 but does so via a weak episode that is brimming with questionable narrative decisions.

Thanks to Agnes Jurati (Alison Pill) interfacing with the Borg Queen (Annie Wersching) in the previous episode, Jean-Luc Picard (Patrick Stewart) knows where to start looking in Los Angeles for the Watcher, the mysterious entity that can supposedly help Picard and his crew correct the damage Q did to the timeline. Before leaving for L.A., however, Picard and Jurati take a break from La Sirena and instead venture inside the dilapidated Picard estate, which has been abandoned for years (and apparently won’t see any other Picard occupants for many years to come).

The reason for leaving La Sirena is a frivolous one, to say the least. The ship apparently lacks heat while it repairs itself following the Borg Queen-Jurati encounter, so Jurati, shivering as she is, is the reason why Picard suggests they go elsewhere to start a fire. Yes, they leave the ship with a semi-operational Borg Queen onboard. This is but the first in some questionable, uncharacteristic decision-making in “Watcher.”

In the Picard estate, Jean-Luc relives some childhood memories, including how his mother, Yvette Picard (Madeline Wise), used to play a verse from “Non, je ne regrette rien” whenever he was feeling scared. This scene, at least, links to elsewhere in this season to when Picard hears that song played. What prominence this song will play in the future will likely be just one narrative thread that started in Picard’s childhood and continues throughout the older man’s adventures.

Otherwise, Picard and Jurati’s excursion to the Picard estate reveals key information: April 15 – three days away – is the date when something critical happens that changes the future as they know it. The duo learns this thanks to Jurati’s subconscious invoking the number 15, be it moving 15 beads on the abacus, picking up volume 15 of the Encyclopedia Britannica, or grabbing a bottle of wine dated 1915. Picard picking up on this pattern is, shall we say, fortuitous, but it definitely results in adding some urgency to the story. With time of the essence, Picard soon sets off to L.A. to find the Watcher before it’s too late.

Picard beams into L.A. (with no regard to trying to prevent people from seeing him) and finds himself at a familiar location: 10 Forward Avenue. However, the bar is in dire straits, and Picard soon finds out from its owner that the establishment is closing down. But who is the owner of this bar in 2024? Who else but Guinan (Ito Aghayere). Indeed, this Guinan is 477 years younger than the one Picard last spoke about during the season premiere.

The younger age isn’t the only thing making Guinan stick out from the one we know and love. The Guinan of 2024 is aggressive, distraught, boozy, and abrasive, all opposite qualities of Whoopi Goldberg’s incarnation. This characterization is reflective of Guinan’s life in this century; she laments how she has given up on the people of Earth after witnessing their disregard for the planet and themselves for so long. Yes, this critique of our present-day Earth is as heavy-handed as it sounds; such heavy-handedness is a criticism we leveled against this show in the previous episode, and it doesn’t seem to be going away.

From the start of Picard and company’s adventures in the 21st century, this show showed no signs of being subtle in its dressing down of contemporary society. Much of Guinan’s dialogue in this episode falls into the “telling” us the category of describing Earth’s drawbacks, but to its credit “Watcher” does show us a fascinating manifestation of Picard‘s anti-21st century message: if someone as wholesome, patient, and gentle as the Guinan of the 24th century can be such an angry person in the 21st century, that means something happens between the past and the future that makes her character change drastically for the better. That’s a good sign, at least. The fact that Guinan does indeed become a friendly, unassuming person is proof people do change, even if it takes longer than it should, which indeed is the message Picard asserts to Guinan before they part ways in this episode.

Guinan is well-connected, it seems, in the 21st century. While she isn’t the Watcher Picard is looking for, she does know who this mysterious person is, a nugget of information the El-Aurian only told Picard after learning his name. This begs the question: why did Guinan recognize Picard’s name and react so strongly to that realization? Moreover, how does that help inform her friendship with him in the future? We don’t learn the answer to these questions in this episode, but Guinan ultimately leads Picard to the person he is looking for: Laris (Orla Brady), or at least someone who looks like Laris (sans pointy ears). We don’t know anything about this person, since the reveal came at the end of the episode, but we are certainly intrigued. Guinan’s description of the Watchers is eerily similar to that of the role Gary Seven plays in The Original Series episode “Assignment: Earth,” where his mission is to ensure humanity develops in the way it’s supposed to. Perhaps there is a connection?

While Picard is searching for the Watcher, Seven of Nine (Jeri Ryan) and Raffaela Musiker (Michelle Hurd) are trying to rescue Cristóbal Rios (Santiago Cabrera) from ICE captivity. After investigating the clinic where Rios was, their first stop is the L.A. police. On the bus ride there, Star Trek fans are treated to a wholly unexpected but hilarious callback to another Star Trek time travel story.

Sitting next to Seven and Raffi on the bus is a spiked-hair man playing obnoxious music from a boom box – music that may sound familiar to fans of “the one with the whales.” Yes, this is the same “Punk on the Bus” from Star Trek IV: The Voyage Home,” played again by Kirk Thatcher. He is rocking out to an updated version of “I Hate You,” the song written by Thatcher for The Voyage Home, but luckily it seems he has learned some manners in the 36 years since his Vulcan neck pinch from Spock; when Seven asks him to turn down his music, he does so immediately and apologetically. Sure, the odds are infinitesimal that Seven and Raffi would encounter the same man, playing the same song, in this same state as where Kirk and Spock met him, but this unrealistic luck is totally fine for such fun tongue-in-cheek reference to Picard‘s time travel lineage.

After having a not-too-helpful interaction with the L.A. police (an interaction that takes no pains to hide our characters’ frustrations with the law enforcement of the 21st century), Raffi decides to do something incredibly reckless: break into a police car and use its laptop to find Rios. This is where this episode loses us.

First, even though she is still driven by grief over Elnor’s death and her need to fix the timeline to possibly bring him back, Raffi knows the implications of the Butterfly Effect, the idea Jurati warned them all about before they started exploring L.A. Even with the agency generated from knowing Rios is about to “disappear” in ICE custody, why does she risk drawing attention to herself by breaking a police car’s window, in front of the police station, no matter how stealthily she is able to do it? There are likely cameras everywhere! What’s more, it is incredibly convenient Raffi is so easily able to use the police computer, despite it being relatively ancient technology. But in any case, what happens next is even more questionable: Seven, in an attempt to avoid any police interruption while Raffi uses the computer, decides to take the driver’s seat and peels out of the police station and drives like a lunatic to where they think Rios is heading.

Again, this pair knows about the stakes in possibly altering the past, so why do they make such a spectacle of themselves? Why does Seven drive so recklessly through L.A. – driving on sidewalks, one-way streets, and running red lights – even when they aren’t being pursued? It’s such an uncharacteristic move by Seven to do this, just moments after reminding Raffi of the importance of protecting their presence. These scenes with Raffi and Seven in the police car are filmed like a one-car car chase, and it’s jarring. Honestly, these scenes feel like trailer bait, and a way to generate action in an otherwise action-less episode. The episode would have been fine without it!

Thanks to their jaunt through L.A., the pair does need to be rescued from the police eventually, and that’s where Jurati and the Borg Queen come in handy. Given the state of La Sirena’s disrepair, the transporter systems need an extra boost to bring Raffi and Seven to a place where they can help Rios; that boost is provided by the Borg Queen but at a price.

“Poor Agnes Jurati, doomed to be the afterthought, left behind again. Not to me. You’re more than you let on – than they can see. Smart, cunning, and remarkably more cruel than I could have predicted.”The Borg Queen to Jurati.

In one revealing scene, the Borg Queen rhetorically undresses Jurati and exposes the scientist’s loneliness and urge to feel connected with people – something Jurati has hinted at in previous episodes. Indeed, the Borg Queen likens Jurati’s urge to feel connected with people as what assimilation is like. As Jurati reasons, she and the Queen are alike in that way. Jurati posits that if the Queen helps transport Raffi and Seven away from the police, she will open herself up, rhetorically, to the Queen. This is an unexpected but intriguing step in the twisted relationship the two are beginning to form, and how such a relationship impacts the Queen, Jurati, and the rest of the crew is a lingering question we’re looking forward to seeing answered. Based on her walking away from the Queen at the end of the episode, Jurati, for her part, seems wary of the promise she made to the Queen.

The twisted relationship between the Queen and Jurati is just one of the many questions this episode confronts its viewers with. We are dying to know who planted these Watchers across the galaxy (although this is something we likely won’t know for a few episodes to come). Learning that they were planted around the galaxy to help protect the destiny of certain individuals is all Guinan explains to Picard just before he meets one of the Watchers, but this one brief line about the Watcher’s origins opens a universe of possibilities. And why has Q (John de Lancie) lost his omnipotent powers? As we see in the episode’s final minutes, Q is inhabiting the same time and place as Picard and crew but realizes he has unexpectedly become just like everyone else. The mystery deepens!

Taken together, we’re sure “Watcher” will be remembered as a transition episode, one that raises a few key questions for the viewer, instead of serving on its own as a noteworthy standalone episode of Star Trek: Picard.

Paramount+ is offering a 1-month trial of the service for free when you apply the coupon code BETWEEN at checkout.