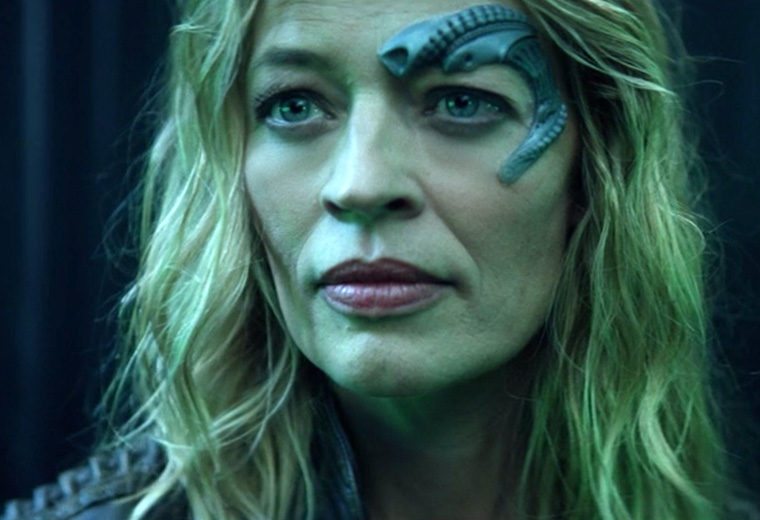 As Star Trek: Picard starts building toward the conclusion of its first season, “Broken Pieces” offers one of the strongest entries yet in the series, thanks to outstanding character moments from nearly the entire main cast, combined with some of the most essential plot revelations yet. 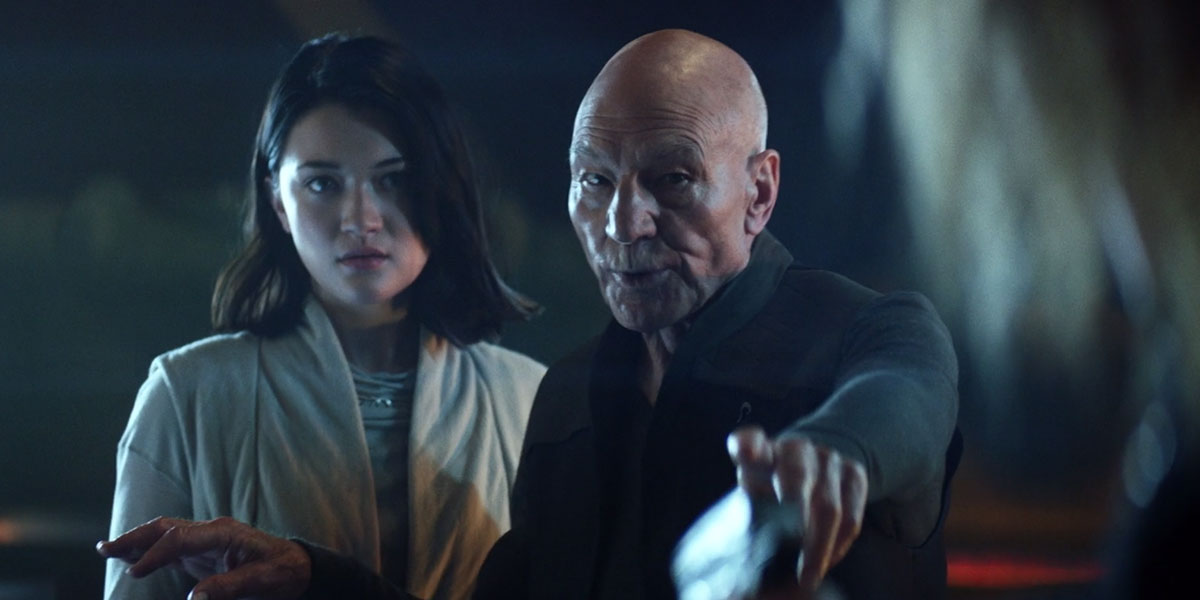 Isa Briones as Soji and Patrick Stewart as Jean-Luc Picard

The episode begins with another flashback, this time of a gathering 14 years ago on the planet Aia of Vulcan and Romulan Zhat Vash agents, including Commodore Oh (Tamlyn Tomita), Narissa (Peyton List), and Ramdha (Rebecca Wisocky). These agents are exposed to imagery that details what happens if artificial lifeforms are allowed to flourish, making some of the agents go insane — and Oh and Narissa are left with their mission: to stop such a scenario from ever happening. 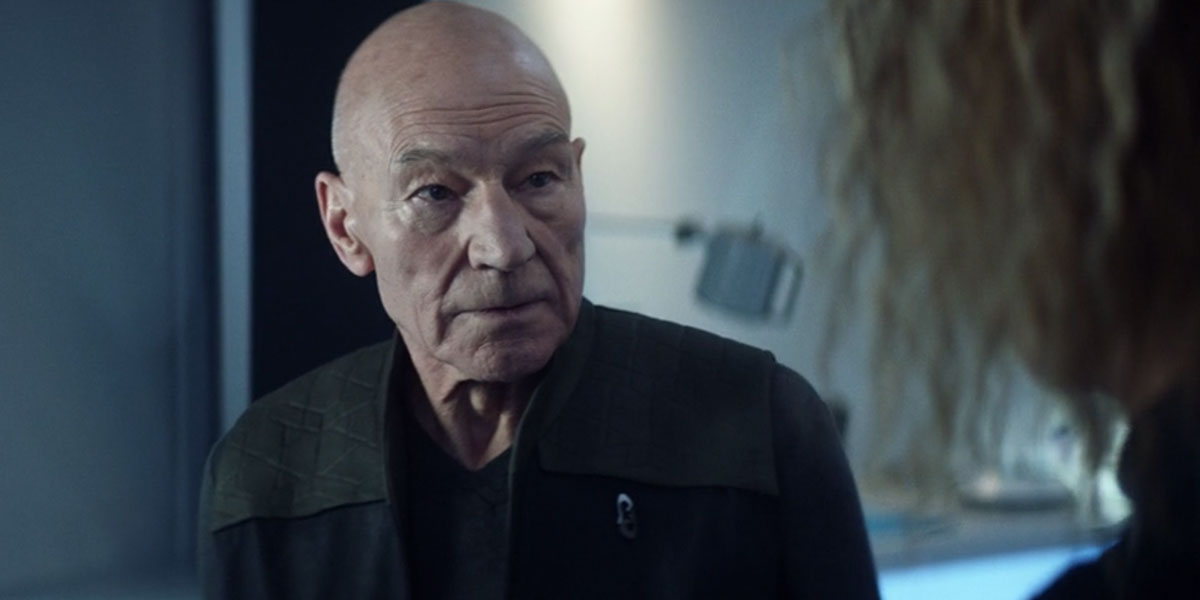 If you are a fan of Mass Effect and this scene — and the foundation of Picard‘s main plot largely — reminds you of the main plot of that video game series, we certainly don’t blame you. As Picard uncovers more and more of its narrative regarding the apex and consequences of synthetic lifeforms, one can’t help but think of that game series, as both explore what happens if superior synthetic life is allowed to rein free. Of course, Mass Effect isn’t the only medium to explore this idea, but as the real world gets more and more geared toward advanced technology and robotic development, we suppose it can’t be helped that such themes are explored in similar ways in different media. Diving into real world allegories is a basic tenet of Star Trek, after all. 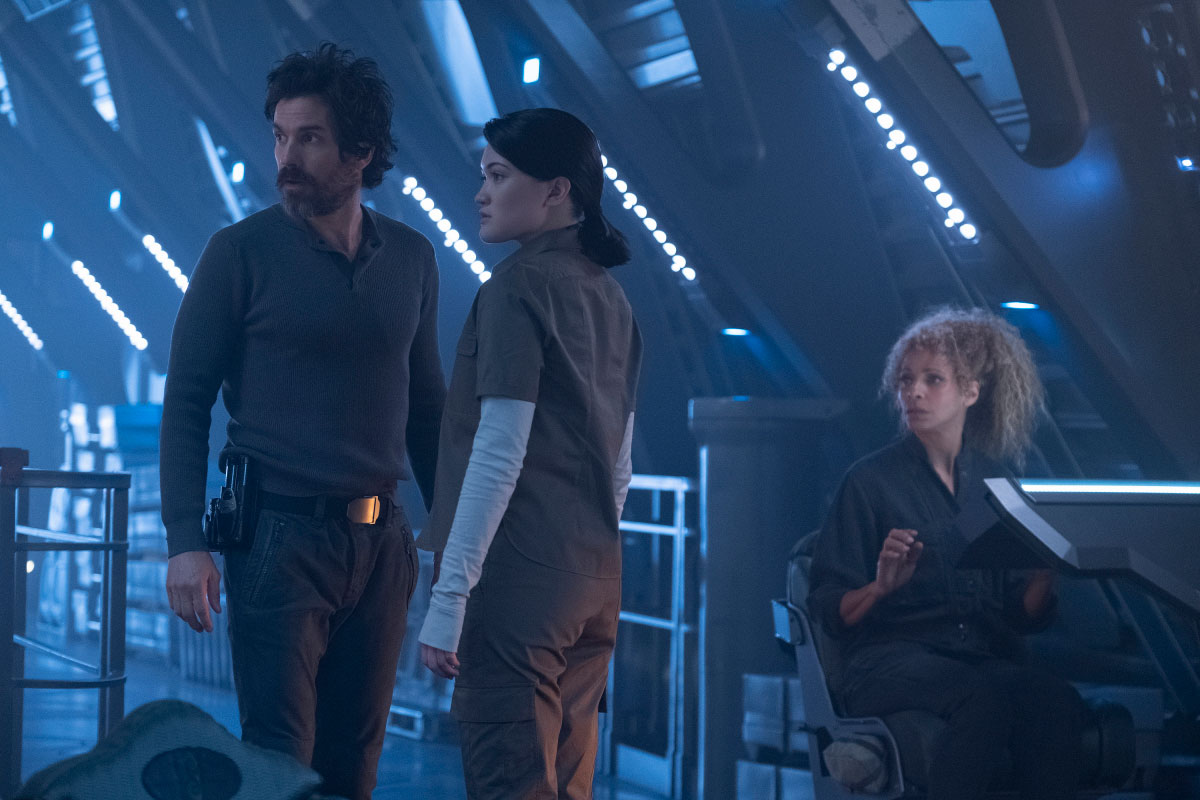 Back in the series’ present day, we get substantial and consistently well-acted character-centric scenes from the crew aboard La Sirena. The most dynamic performance in “Broken Pieces” comes from Santiago Cabrera, who not only expertly portrays a surprise element from his past regarding his late captain and his history with synthetic lifeforms, but also pulls quintuple duty by playing the ship’s five holographic helpers. There’s one scene, where the versatile Cabrera shares a room with the five holograms and Raffi (Michelle Hurd), that shows off the two actors’ ability and how Picard can be subtly funny. We’ve said before that Cabrera and Hurd are two of Picard‘s standout performances, and “Broken Pieces” only reinforces that assertion. 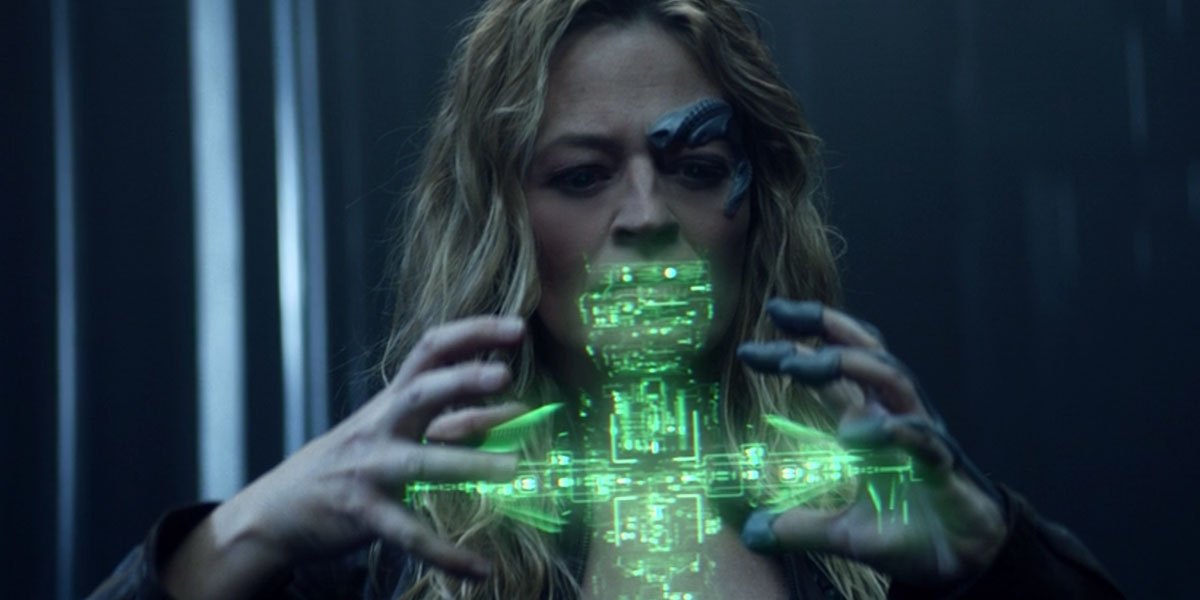 We’ve also previously stated that Alison Pill (Agnes Jurati) hasn’t really had a whole lot to do compared to her castmates, but that changes in this episode. Out of her self-induced coma, Jurati finally is able to come face to face with Soji (Isa Briones), a creation of the late Bruce Maddox with whom Jurati is absolutely enamored. Seeing how the doctor is consistently astounded by how human Soji is is a pleasant reminder of the basic, mundane qualities that make us all human, and that we shouldn’t take that for granted. Not only does Pill have to portray scientific and humanitarian interest with Soji, but her character has to face the music after helping the Romulans track La Sirena. Pill is able to portray this guilt and sadness convincingly. It’s a dynamic performance that increases the actress’s standing in our eyes. 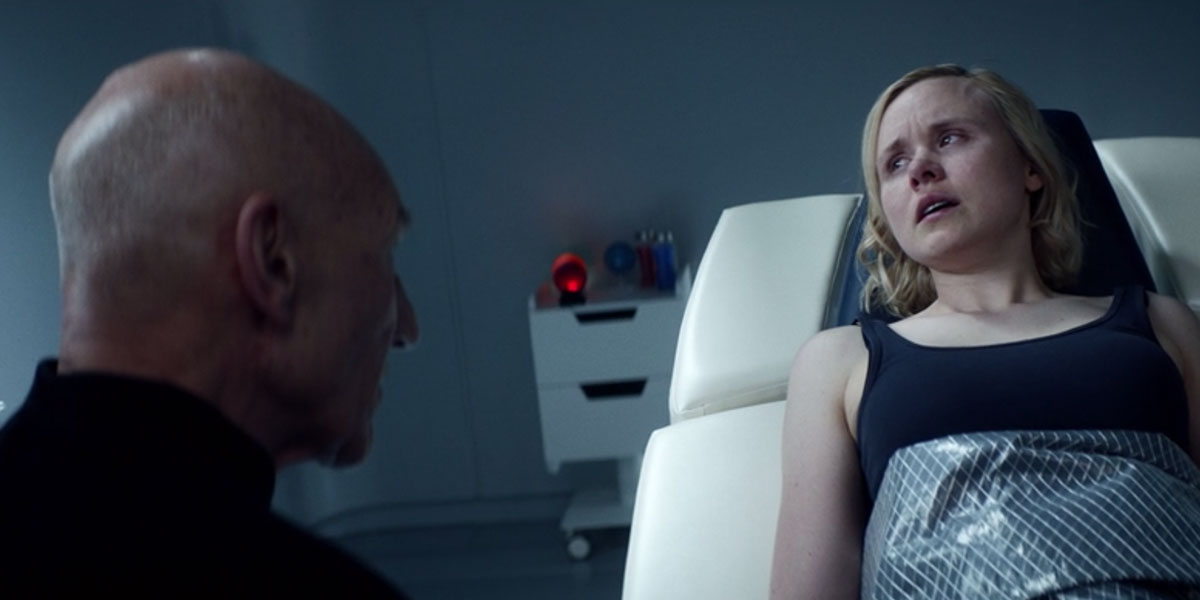 Probably the true heart of this episode comes during an exchange between Picard (Patrick Stewart) and Soji. Picard asserts that despite how alien Soji may feel toward herself, she still has “a story waiting to be claimed.” Soji turns the conversion toward the late Commander Data, and hearing Picard tell her about his friend is touching and sentimental. Picard, in a rare display of emotion (which he admits is unusual for him), tells Soji that he felt a certain kind of love for Data, and wonders if that feeling was reciprocated. After a moment’s pause, Soji, ostensibly and unknowingly using the single neutron of Data’s that she has, asserts that Data did love Picard. This subtle declaration is the cherry on top of a wonderfully performed scene and also adds so much to Picard’s firmly established character. One of the best parts about this show is that is isn’t afraid to add layers to established characters, and having Picard display and talk about emotion is an appropriate and welcome upgrade for his character. It’s something we couldn’t imagine Picard doing in The Next Generation, but it feels perfectly at home in Picard. 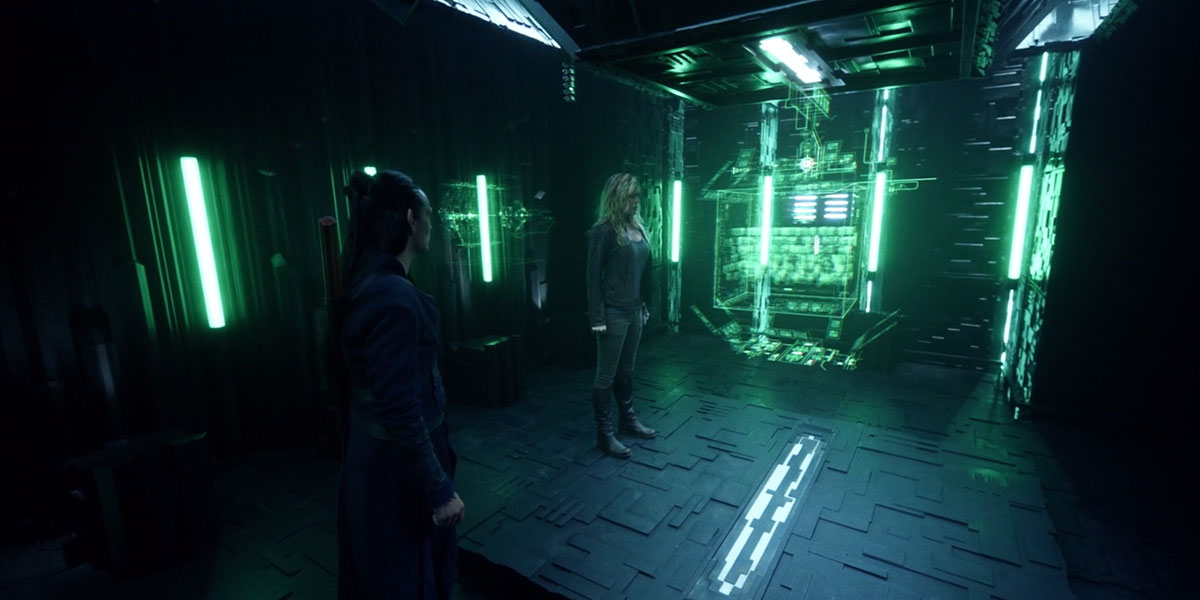 The other big events this episode take place on the Borg cube, as Elnor is struggling to survive the Romulan-infested ship. Luckily for him, the Ranger beacon he activated in the last episode comes into play at just the right time, as Seven of Nine is able to rescue him from Romulan assailants. Having Seven enter the exact room Elnor is in at just the right time is too much of a ex machina to ignore (this show has done a little too many ex machinas for our taste). If Seven’s arrival was fleshed out a little more, perhaps by showing her receive the beacon, then her ship approaching the Cube and locating Elnor, this scene would be a lot less jarring. In any case, the succeeding events are awesome to behold, as Seven takes control of the Borg within the Cube in a scene that will surely excite Star Trek fans. And while the ultimate fate of the non-Xb Borg is quickly decided, the fact that the Cube is now in the hands of our heroes, and that Seven asserts that “Annika still has work to do,” leads to all sorts of speculation of how that Cube and those characters will play out in the season’s end. 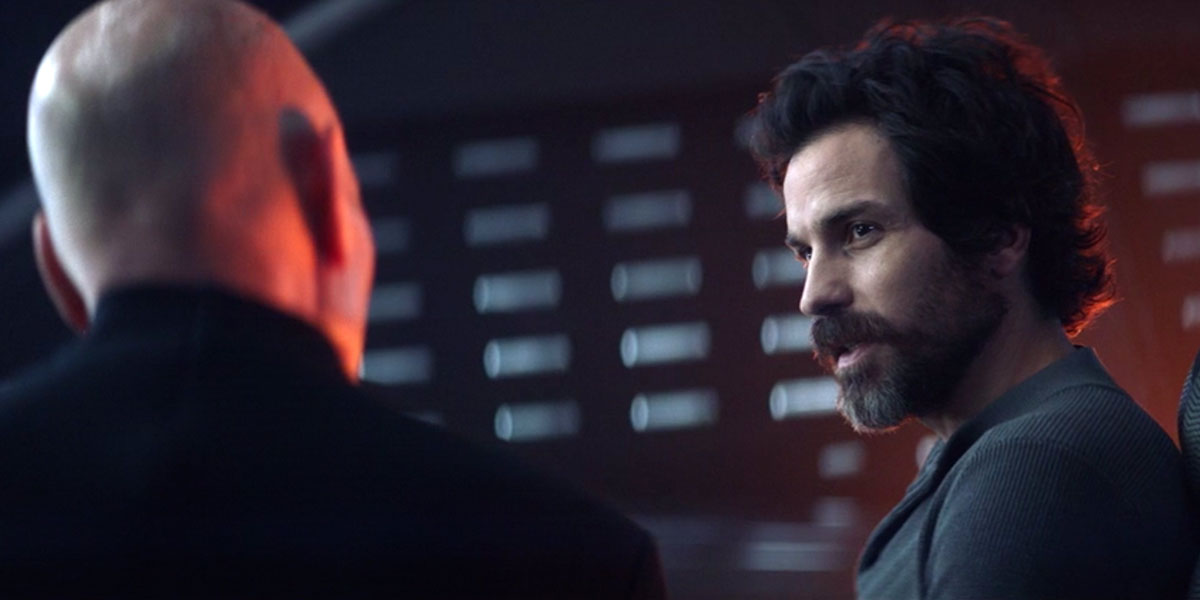 Taken together, “Broken Pieces” is an extremely enjoyable and well-written episode that allows Picard‘s outstanding actors to shoulder the episode’s weight largely on their own. The sense that we are quickly heading toward an exciting season’s end is permeated throughout this episode’s plot revelations, and we can’t wait to see what happens next.