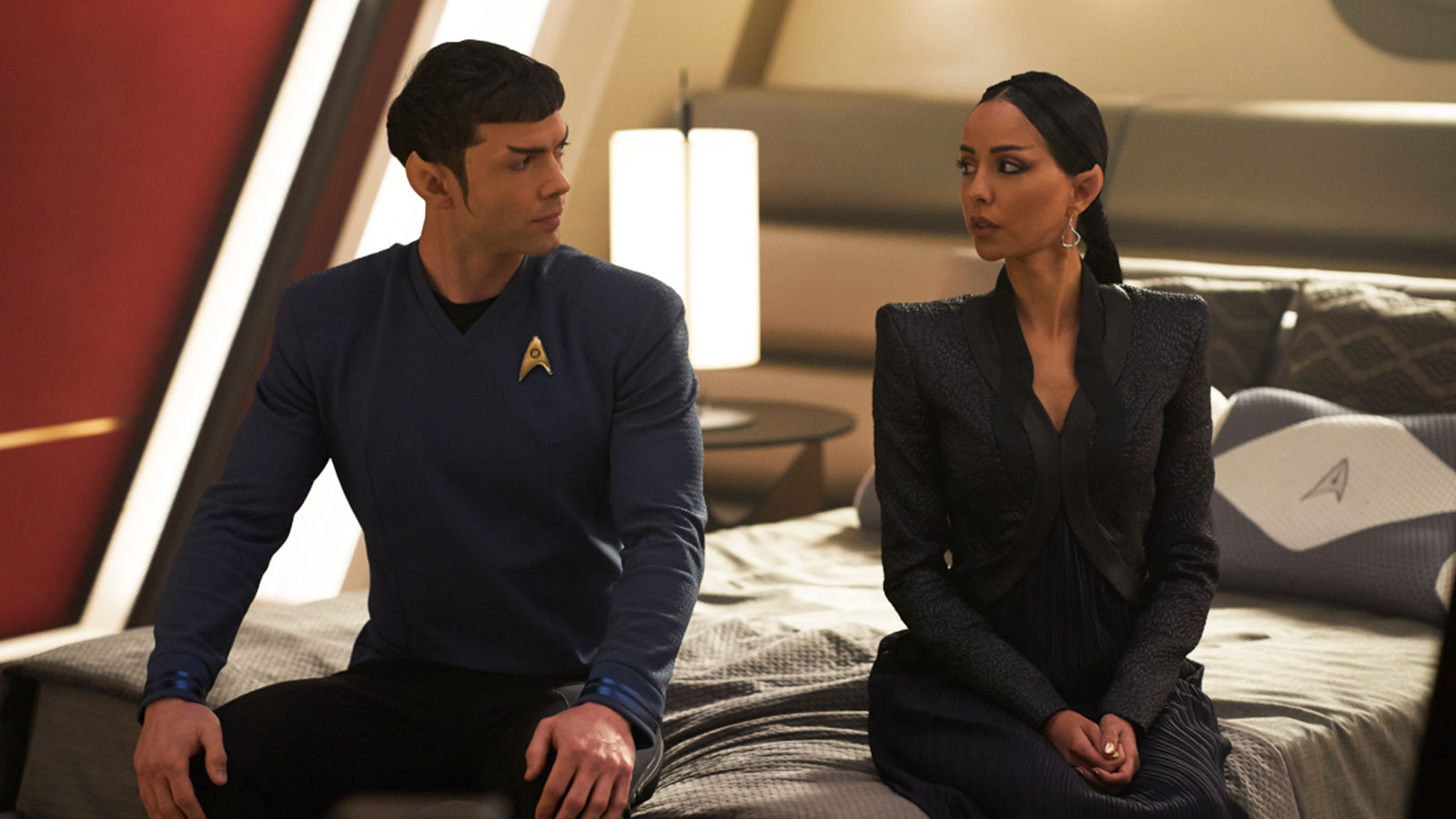 Hot off the heels of the super-serious “Memento Mori,” Strange New Worlds treats fans to a comedic outing in “Spock Amok,” an episode that features plenty of hijinks while still offering a decent moral takeaway.

The episode sees Spock having a bit of a tough time. He is set to meet his fiancé, T’Pring (Gia Sandhu), on the beautiful Starbase 1 while the Enterprise is repaired after its fight with the Gorn. Spock hopes the pair rekindle their burgeoning romance since their engagement was cut short in the series premiere.

More importantly, Spock is concerned his half-human side will interfere with caring for T’Pring in the way she deserves. Case in point, Spock dreams of these two halves of himself fighting each other. Veteran Star Trek fans will recognize this dream fight contains plenty of Vulcan imagery and sound seemingly straight out of The Original Series classic episode “Amok Time.”

Spock’s Starfleet responsibilities ultimately do take him away from T’Pring, which leads her to voice the same concern Spock had about his half-human side pulling him away from a proper Vulcan marriage. Upon advice from Nurse Christine Chapel (Jess Bush), Spock tries a new tactic to show his dedication to his fiancé. He initiates a Vulcan ceremony with T’Pring that is designed to bring their katras, the Vulcan equivalent of a soul, together in perfect harmony. It’s a chance for their two minds to expose themselves to each other in the most honest way possible. But this ceremony is easier said than done, and the two Vulcans end up switching bodies. Spock resides in T’Pring, and vice versa. Twist!

Yeah, it’s goofy, but “Spock Amok” knows it’s goofy. This episode doesn’t try to pass off this switch-a-roo as anything but fun sci-fi – as opposed to, say, “Spock’s Brain” taking itself seriously. Star Trek, after all, is no stranger to wonky episodes. Just a few that come to mind are “The Trouble with Tribbles,” “Q-Pid,” “Rascals,” “Magic to Make the Sanest Man Go Mad,” and “Stardust City Rag,” among others.

“Spock, you are clearly an extraordinarily intelligent person.”

“But you are also an idiot.”

“I feel I should have seen that coming.” Nurse Chapel and Spock, after Spock describes his romantic trouble.

Beyond the chuckles of the two Vulcans awkwardly adopting each other’s mannerisms, there are some serious consequences to this switch. T’Pring is partly on Starfleet 1 to bring in a Vulcan renegade, Barjan T’Dr (Alden Adair); capturing Vulcans who have left the path of logic is her profession, as Spock helpfully exposits to the audience. Spock, meanwhile, is already entangled with a diplomatic mission, as the R’ongovian Protectorate, a species that owns a valuable corridor between Klingon and Romulan space, is talking with Starfleet brass about a possible alliance. The two Vulcans will have to attempt their respective missions in each other’s bodies.

Sensibly, Spock and T’Pring don’t try to hide their problem from Captain Christopher Pike (Anson Mount), who ends up doing a wholly irresponsible and uncharacteristic thing and insists T’Pring fill in for Spock at the negotiating table. It appears the R’ongovian Protectorate will only talk to Spock. Yes, having T’Pring in this meeting is a catalyst for some notable character moments later in the episode, but did this have to happen at the expense of Pike totally skirting the medical and ethical responsibility to try and help the Vulcans return to their own bodies? All he does when confronted with the body-swap situation is brush it aside in favor of pursuing negotiations. That doesn’t seem like a realistic character decision.

At the negotiations, T’Pring doesn’t shy away from subtly using her trouble with Spock’s dedication to Starfleet to inform her conversation with the R’ongovian Protectorate. But more importantly, she gets a sense of what Spock sacrifices to play a role in Starfleet. It’s not easy being a half-human, half-Vulcan Starfleet officer who feels pulled between two worlds. Pike, to his credit, helps drive this point home to T’Pring, and the captain asserts Spock is the very embodiment of Starfleet because of his dedication, intelligence, and flexibility to live in two worlds.

In his own mission, Spock, in T’Pring’s body, needs to capture Barjan T’Dr, the Vulcan who has seemingly decried logic and needs rehabilitation. Enlisting Nurse Chapel to aid him to offer a more human component to the discussion, Spock confronts T’Dr, but the man’s behavior against Chapel, and his out-of-the-blue and unexplained rudeness toward Spock’s father, is a bit too much for Spock to handle. He ends up knocking out T’Dr, a telling move that points to Spock developing an affection for Chapel.

Yes, this episode spotlights Nurse Chapel much more than any previous episode. We learn here that she is a flirty, non-committal, and fiery character who goes through no small measure of effort to help her friends. Bush’s portrayal of this character makes her stick out from the cast in a pleasant way, and we’re thrilled the nurse is finally getting the screentime she deserves. We’re curious how and if the character will change over the course of the season as she is confronted with her commitment issues, and hopefully we’ll learn why she is afraid to commit to relationships to begin with.

This episode’s b-story focuses on Una Chin-Riley (Rebecca Romijn) and La’an Noonien-Singh (Christina Chong) as they have the Enterprise mostly to themselves as the crew goes aboard Starbase 1 for shore leave. They learn from the loose-lipped Doctor M’Benga (Babs Olusanmokun) that the two women are known for being super-serious and no fun, something the two officers ponder as they go about their business. But after catching two ensigns trying to complete a particularly daring section of Enterprise Bingo, a game first mentioned in “Children of the Comet,” the two officers decide to try bingo out for themselves to get a better understanding of their crew. For typically serious officers, trying to complete this nonsensical checklist offers its own laughs, but the real reward of this storyline comes in its conclusion.

The last thing to check off the bingo list is to get out to the oldest, unreplaced piece of the Enterprise’s hull – known as “the Scorch” – and sign their names on the hull plating. Because they are trying to accomplish this in the most rule-breaky way possible, the two women go sans EV suits, leaving nothing between them and the vacuum of space than a forcefield. Is it realistic the two women would take this risk just to complete the bingo card? Probably not, but the sequence of them signing their names, and then seeing the R’ongovian solar ship passing by, is so beautiful viewers probably won’t even care about how realistic the scene is.

Jokes aside, “Spock Amok” offers an endearing lesson for viewers: honesty usually wins the day. To get the R’ongovians on board with joining the Federation, Captain Pike wisely appeals to the alien’s radically empathetic nature and agrees with their assessment that joining the Federation may not be in their best interest. But, it turns out the R’ongovians appreciate that kind of honesty and opt to join the alliance despite the risks. For Spock and T’Pring, being honest about how they each feel about their strained relationship was the key to getting the engagement back on track, especially after Doctor M’Benga and Nurse Chapel were able to reverse the body swap with some yadda-yadda science-ing.

Setting a change of tone was a wise move by this season’s showrunners. The first four episodes showcased a lot of tension, emotional strain, combat, existential crisis, and the like. “Spock Amok” gives viewers a chance to let out their breath a little and enjoy the chemistry this cast is building. While not every joke lands perfectly, and the aforementioned lack of competence by Pike is concerning, we totally enjoyed “Spock Amok” for what it is: fun Star Trek with no small measure of heart.