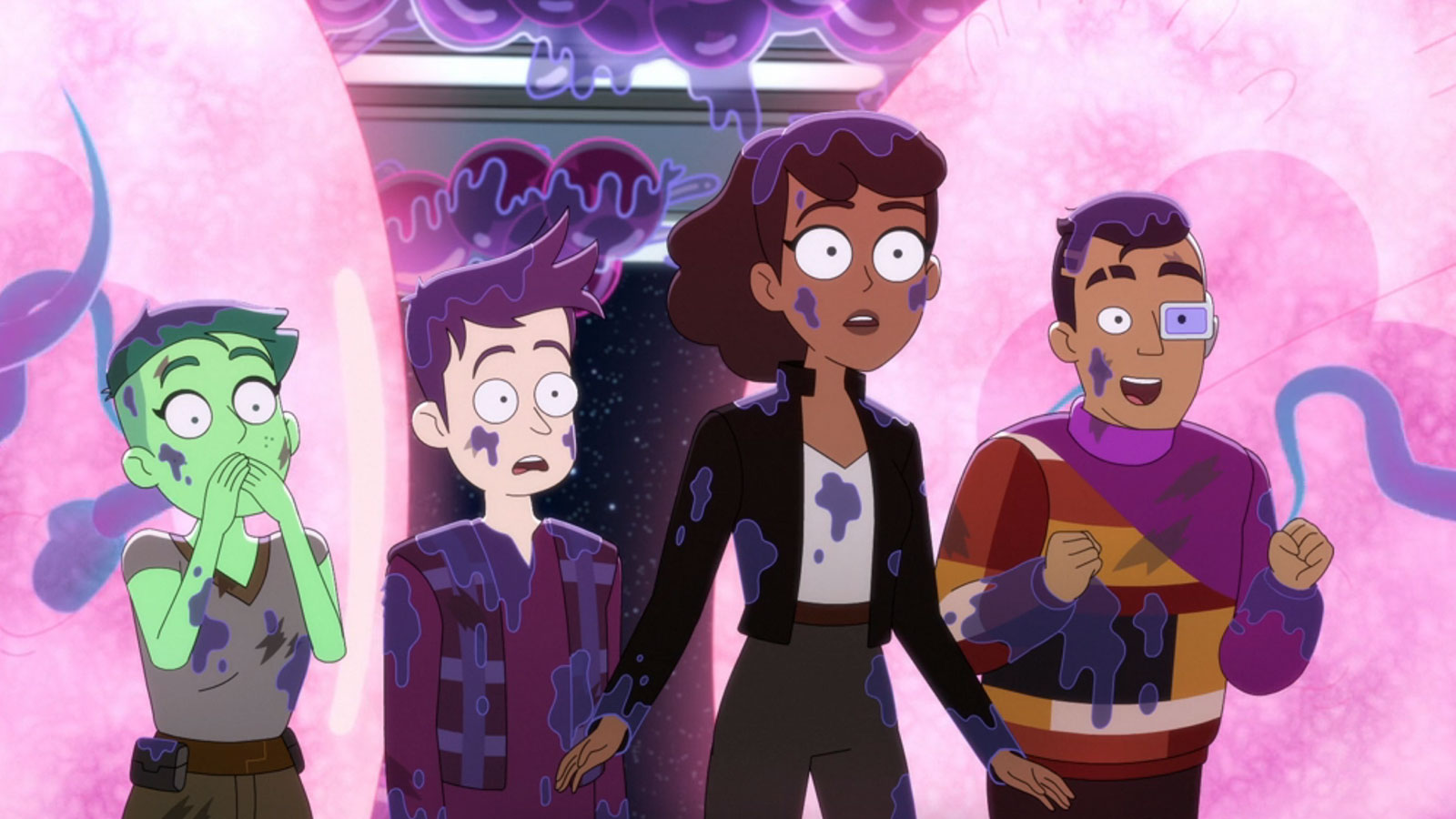 After knocking its second season out of the park, Star Trek: Lower Decks returns for its third outing. But how do you follow up on a fantastic season finale that showcases how and why this show works so well? The answer: “Grounded.” This season three premiere returns to the same level of quality, heart, self-reflexive humor, and deep respect for the Star Trek franchise that this show is known for, and we’re so happy Lower Decks is back.

The second season ended with Captain Freeman (Dawnn Lewis) arrested for supposedly destroying the Pakled’s homeworld. It’s a serious charge, indeed, but one of Freeman’s crew, including her daughter, Beckett Mariner (Tawny Newsome) knows can’t be true. With the Cerritos in drydock after the explosive second season finale and the crew killing time on Earth, for the time being, Mariner isn’t content with waiting around while her mother is on trial.

Mariner enlists the aid of her fellow ensigns, who are spending time on Earth in their own way. Brad Boimler (Jack Quaid), hilariously, is tending to his family’s raisin vineyard, where he inexplicitly is a ladies’ magnet as he tends to the raisins. Sam Rutherford (Eugene Cordero) and D’Vana Tendi (Noel Wells) are traveling together and visiting Sisko’s Creole Kitchen (as seen in Deep Space Nine), but their time in New Orleans is cut short when Mariner, with a recently recruited Boimler, shows up and the crew hatches a plan to get on board the Cerritos to try and prove Freeman’s innocence.

Thanks to a migrating mass of verugament (space bugs) moving through Earth’s space, and thanks to their grounded status, the ensigns can’t just beam or take a shuttle to the drydock where the Cerritos is being repaired. So, they play the role of tourists and travel to Bozeman, Montana – the site of the historic first contact between humans and Vulcans – to steal a replica of the Phoenix and get off Earth that way. What follows is a hearty and hilarious tribute to Star Trek: First Contact, complete with plenty of imagery and music from that movie, and a guest appearance from the legendary James Cromwell as a tour-guide version of Zefram Cochrane. The ensigns’ visit to Montana showcases this show’s deep knowledge of its lineage, and will surely put a smile on the face of anyone who knows and love this classic TNG movie.

“All right, buckos, prepare for your trek amongst the stars. Oh, before I forget… Let’s rock and roll!”

Zefram Cochrane as the Phoenix launches into space.

Onboard the Cerritos, the proof that Mariner was hoping would prove her mother’s innocence – Biomler’s re-recorded versions of the senior officers’ logs – turns out to be useless (for reasons we won’t spoil here), and Mariner gets a bit desperate. After unsuccessfully trying to leave her friends behind to protect their innocence, she tries to steal the Cerritos to venture off and gather more evidence that would help her mom, but Starfleet ultimately catches up with the wayward ship. Much to the ensigns’ surprise, it’s Freeman and the rest of the senior officers who return to greet the rebellious ensigns, and what follows is a prime example of how this show tries to subvert audience expectations.

You see, while the Freeman trial was ongoing, Starfleet was investigating the destruction of the Pakled planet. Normally, we might think Starfleet “investigating” the trial of a beloved captain would be detrimental to the captain (think of TNG’s “The Drumhead”), but in this case, Starfleet actually pulled through for Freeman. A team of stealthy investigators, led by Captain Morgan Bateson (unvoiced here, but played by Kelsey Grammar in the TNG episode “Cause and Effect”) and involving Tuvok (unvoiced here, but played by Tim Russ in Star Trek: Voyager), determined it was the Pakleds who destroyed their own planet to try and get the Federation to relocate them to a more resource-rich planet. Thus, Freeman is cleared of her crime, but it’s not exactly a happy ending for Mariner.

Freeman, exasperated by Mariner’s continued unfiltered service in Starfleet, determines her daughter can no longer be under the supervision of her mother. So, it’s Jack Ransom (Jerry O’Connell) who gets to supervise Mariner for the foreseeable future. What kind of trouble will this lead to?

Taken together, “Grounded” is a fantastic return for Lower Decks, a show we maintain is the best production of the Kurtzman-era Star Trek. This episode is populated with deep references to previous shows, a hearty tribute to arguably the best Star Trek movie, and a neat conclusion to the preceding season finale. This show remains as beautifully animated as ever, and we particularly noted how awesome it was seeing the Phoenix on screen and rendered in such detail. But as always, character dynamics are the driving force of any show, and it seems this season will offer a few things to look forward to, such as the fallout of Mariner being under Ransom’s wing.

We also get the sense from this episode that the ensigns are closer than ever, thanks to Mariner and Boimler moving past their rift over Boimler being assigned to the Titan in season two. Boimler was indeed the first ensign Mariner contacted about trying to prove her mom’s innocence. It was also sweet to see Rutherford and Tendi continuing their platonic relationship even off-ship, but we can’t help but wonder how Rutherford’s mysterious flashbacks seen briefly in the season two finale will play into season three.