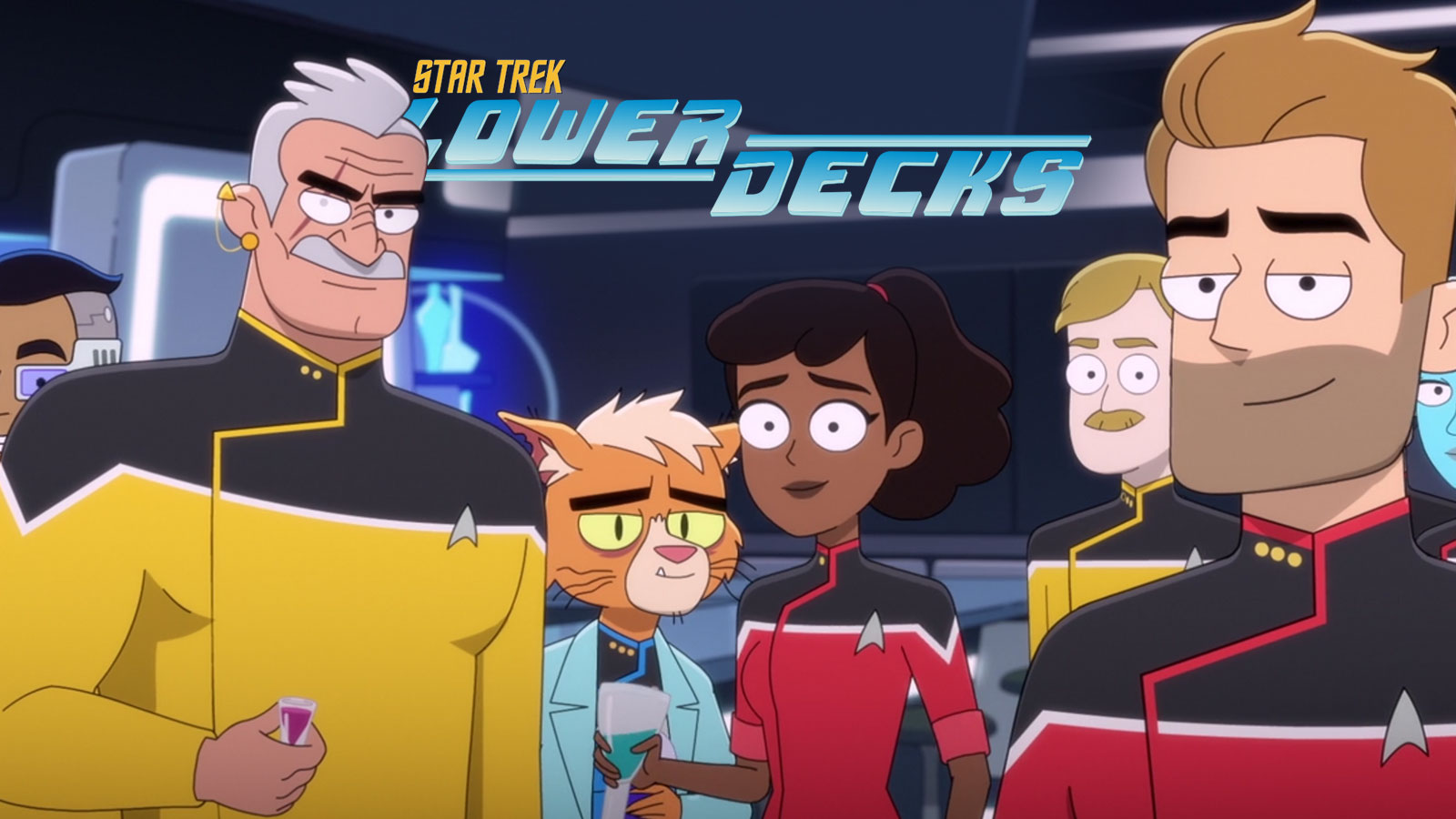 The season two finale for Lower Decks is the best illustration of what we’ve been saying about this season all along: this show has gained well-earned confidence in itself. It’s so confident, in fact, that it delivers an excellent season finale without the assist of killer cameos or over-the-top fan service. Lower Decks has entered its own, and we think it’s fantastic.

As foreshadowed in the season two premiere, Captain Freeman (Dawnn Lewis) has finally earned a chance at a promotion – albeit one that would take her away from the Cerritos and her crew. This potential promotion would happen after one last mission – assisting another Starfleet ship, the Archimedes, with first contact in the Laap System.

The Archimedes is a killer-looking ship. It’s an Obena-class, a cross between a Sovereign-class and an Excelsior-class, and it’s striking. Unfortunately for the ship and its crew – led by Captain Sonya Gomez (Lycia Naff, who reprises her role from TNG‘s “Q Who”) – the Archimedes suffers a catastrophic disaster just before its scheduled first contact thanks to a nearby exploded planetoid. The ship ends up tumbling end-over-end toward the planet below, leaving the Cerritos to save it.

The way the crew figures out how to navigate deadly stellar debris to save the Archimedes is unlike any solution we’ve ever seen in Star Trek. In “First First Contact,” the crew rallies to remove the ship’s outer hull plates so they can avoid the worst of the stellar fragments; they even go so far as to remove the viewscreen, leaving crewmembers to shout out when stellar fragments are incoming so the ship can maneuver around them.

For our money, we think this setup is a great showcase of how animation gives life to ideas in a way live-action cannot. Would crewmembers walk around the hull stripping hull plates and then flying through such a thick debris field be feasible for a live-action show? Most likely not, and that’s why we think this episode is notable amid an otherwise excellent season. Kudos to the writer (and series creator) Mike McMahan for knowing how to use this medium to great effect.

Of course, some personal drama has to weave in-between the over-arching plot. Mariner (Tawney Newsome) accidentally overhears that her mother is about to get a promotion, and, thinking it’s the most efficient way to annoy her, tells the senior officers before the captain has a chance to. Mariner herself is deeply hurt that her mother is going to take another posting, and unsurprisingly lashes out at her, even in the middle of saving the Archimedes. Of course, the pair reconcile their differences following the crew’s near-death experience, and we think the consequences of Freeman’s potential new posting is a great way for the pair to continue building a more normal mother/daughter relationship. It forces the two of them to confront a life aboard a starship without each other, and in the face of such loss, what better time to reconcile?

To a less-important degree, Mariner also reconciles with another Cerritos crewmember: the fan-favorite Andorian Ensign Jennifer Sh’reyan (Lauren Lapkus). Following a brief interaction earlier in the episode where the two ensigns bring their distaste for each other to light, Jennifer actually goes out of her way to save Mariner during the climax of the episode. It’s an unexpected development in a character arc we didn’t pay much attention to throughout the season, and we can’t say we won’t miss Mariner quick but angsty exclamations at the Andorian.

Rutherford (Eugene Cordero), meanwhile, is having a problem with his implant: he’s running out of storage, which is causing error messages to pop up into his line of sight. What’s taking up all his storage space? As it turns out, memories of Tendi (Noel Wells), as he doesn’t want to forget about her like he did after his implant was destroyed in the season one finale. It’s a sweet gesture that speaks to how valuable he considers his Orion friend. After seeing these two ensigns interact in this episode, including a scene in a Jefferies Tube where it appears Rutherford is about to express feelings for Tendi but instead proclaims his love for the Cerritos, we are finally convinced that their relationship is – and always was meant to be – platonic. We are totally down with this, as too often TV shows almost automatically turn opposite-sex relationships romantic. Guys and girls can just be friends, folks, and it seems Mike McMahan agrees.

Unfortunately for the engineer, Rutherford rightly places the emergency at hand ahead of his desire to keep backup memories of Tendi, and he opts to delete his backups – but in the process “remembers” a strange sequence involving what looks to be scientists examining him on a table and talking about his implant – including how he is meant to believe he chose to get the implant as elective surgery. It’s a quick and intriguing hook by McMahan, and we can’t wait to see if season three will illuminate this tease.

Boimler (Jack Quaid) gets plenty of action in his episode, including “saving the day” by removing the last piece of the Cerritos‘ hull plating near the climax of the episode. This ending is apparently welcome for the character, as he was lamenting in the episode’s beginning that he’s jealous of Freeman’s new assignment and that he never gets to dive into “unknowns.” We thought this lament was strange for the character, as Boimler has been diving into unknowns all season – from his time on the Titan, to trying to survive the Mugato attack in “Mugato, Gumato,” to escorting an evil computer and getting stranded on a desert planet in “Where Pleasant Foundations Lie.” Did all these things not classify as “unknown” enough for him? Confusing characterization aside, Boimler certainly does get to do something unknown – both to him and to die-hard Star Trek fans: work with the creatures in cetacean ops.

It may not seem like a big deal to casual Star Trek fans, but the existence of this specialized department aboard Starfleet ships was heretofore the stuff of technical manuals and obscure references. Keen observers studying the printed Enterprise-D blueprints from the mid-1990s would know that cetacean ops – a place where aquatic animals helped navigate the ship – was mentioned as being on deck 13 of the Galaxy-class ship. Lower Decks was actually the first show to canonically mention this department within the Prime Universe, such as when Tendi mentioned back in the series premiere that this department was one of the best places on the ship. Now, finally, we’ve seen what these aquatic folks and their stations look like. It’s an awesome bit of slow-burn fan service, perhaps one of the most memorable parts of an extremely memorable episode, and another example of this episode utilizing an idea that would be prohibitively expensive in live-action.

Of course, the Cerritos ultimately saves the Archimedes, and Freeman actually gets to initiate first contact with an alien species – a major change for her, as the Cerritos historically has second contact responsibilities. She is also set to get that promotion, but of course, things don’t go down the way they are supposed to. At the last minute, it’s revealed that Freeman gets arrested for the destruction of the Pakled homeworld, which was recently devastated by a Varuvian bomb. Twist! Thanks to evidence that points to Freeman interacting with the Pakleds, including imagery from her visit with Pakled leadership during “The Spy Humongous,” the captain suddenly has a major fight in front of her to prove her innocence. It’s obviously a setup of sorts, but that’ll have to wait until next season.

The other thing we’ll have to wait until next season for relates to a plot hook from “wej Duj” that we thought would be addressed in this episode, but wasn’t: T’Lyn, the Vulcan Lower Decker who was going to be reassigned to a Starfleet ship following her emotional unpredictability. The obvious guess is that T’Lyn would be reassigned to the Cerritos, but considering this show’s penchant for subverting expectations, we’re not going to put money on where she’s going quite yet, or when she’ll show up next.

As a cap to an excellent second season, “First First Contact” delivers a Lower Decks episode that serves as an action-packed primer for the next season. Thanks to some beautiful animation from Titmouse, some major hooks from Mike McMahan, and solid (but not gratuitous) fan service, we’re totally satisfied with this season-ender, and eagerly await the third season – not that there won’t be a lot of Star Trek between now and then!

Star Trek: Lower Decks will return for a third season in 2022.