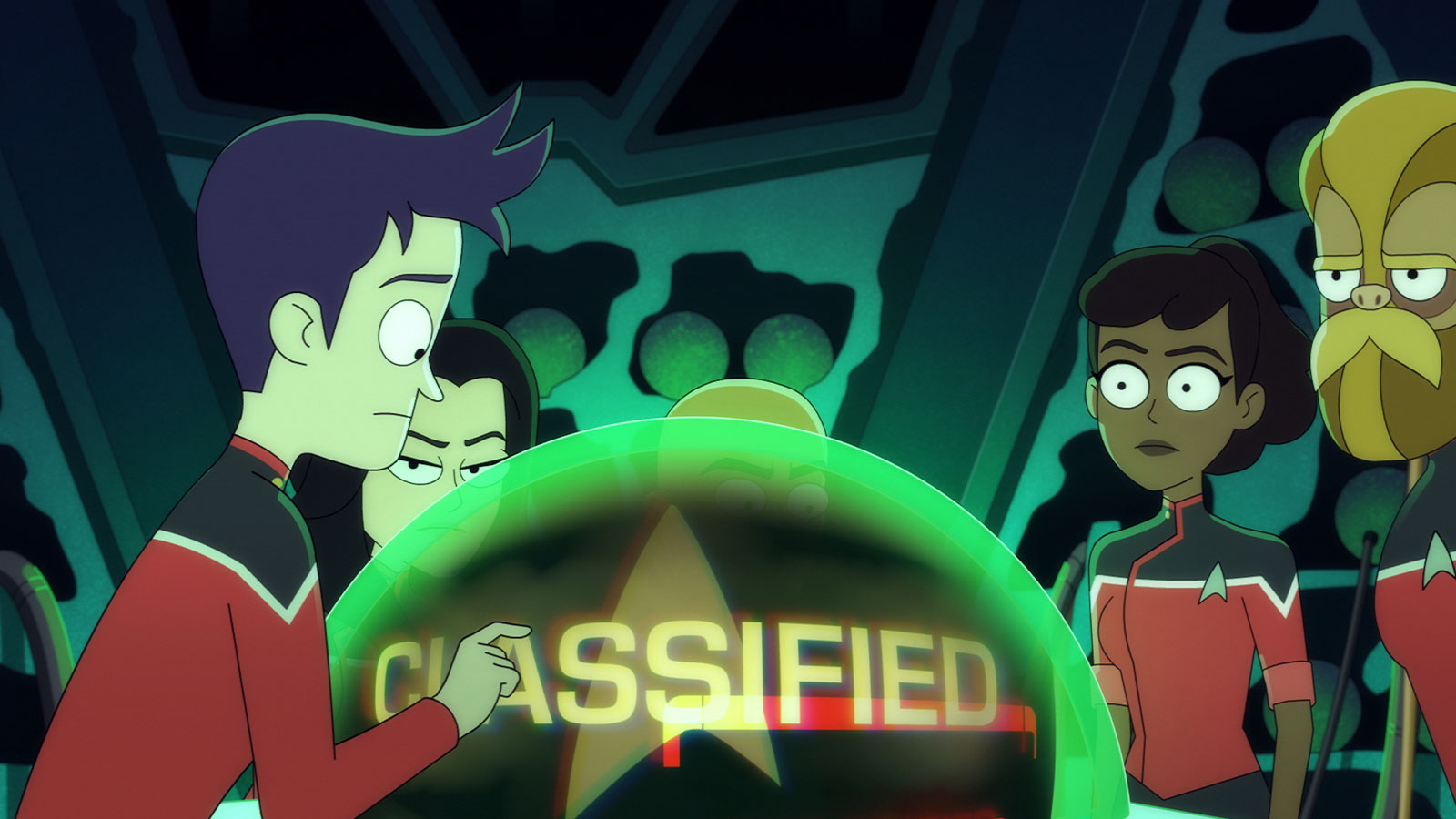 The ensigns’ greatest fears and fantasies come alive as the Cerritos crew assists a sister ship in handling dangerous mind-reading alien orbs – and in the process, we get to know our heroes a bit better.

The Cerritos arrives on-site at Jengus IV to help the USS Hood (an Excelsior-class ship seen in TNG, DS9, and referenced in Star Trek: Nemesis) and the USS Carlsbad in removing recently discovered alien orbs from an outpost on the planet below. These “psychic mines” were turning the outpost staff to stone after bringing their fantasies to life, so they definitely pose a threat to everyone except the planet’s natives, called the Scrubble.

Cleaning up these mines is simple enough, at first, as the Cerritos ensigns must carefully work around their harmless fantasies coming to life. Seeing what Ensigns Brad Boimler (Jack Quaid), Beckett Mariner (Tawney Newsome), and Samanthan Rutherford (Eugene Cordero) consider their most personal fantasies is intriguing. Boimler unsurprisingly would love to hang out with a Starfleet admiral and get promoted to captain; Beckett actually has pretty strong feelings for Ensign Jennifer Sh’reyan (Lauren Lapkus), the Androrian crewmate who we see Mariner get annoyed with in previous Lower Decks episodes; and Rutherford, like another engineer we know, is secretly in love with Doctor Leah Susan Brahms (voiced here by Susan Gibney, who reprises her role from two TNG episodes).

Seeing the ensigns embarrassed or amused by these fantasies is good for a few chuckles, but the two California-class crews soon get into a bit of a competition on who can finish their assignments first. This competition between the more laid-back Cerritos crew and the more up-tight and by-the-book Carlsbad crew leads to the mind-reading orbs being broken, thus giving life to the crews’ greatest fears, including Klingons dressed in clown makeup, a Borgified snake, and, in Mariner’s case, a partner who wants to settle down. Boimler is right – maybe Mariner should go back to therapy.

The two Cali crews rush into a cave to escape the monsters and lose contact with the ships in orbit. Upon exploring the cave, they discover a literal data mine that is transmitting information from the ensigns but using Federation technology to do so. The ensigns’ reason the Federation outpost staff and the Scrubble must be working together, but why?

“It’s not a real day in Starfleet until comms get blocked.”

– Mariner as the ensigns lose communication with their ships.

Meanwhile, on the Cerritos, Ensign D’Vana Tendi (Noel Wells) is having her own adventure. As her friends depart to the planet below, she is set to begin senior science officer training, but with an unexpected teacher: the ship’s counselor Dr. Migleemo (Paul F. Tompkins). Tendi is initially dismayed at her training not starting in the way she wants, as Migeleemo is totally not the right person to train a senior officer to be, but things get more interesting when she witnesses Captain Freeman (Dawnn Lewis) and Captain Maier (Baron Vaughn) of the Carlsbad tackle negotiations between the inhabitants of Jengus IV and the Federation scientists.

In the conference room, the two captains end up arguing over who should keep a token of respect, a rock from the planet, from the Scrubble. Freeman is initially weary of taking the token, as it would indicate to Maier that she is indeed an “old school” officer, a notion Freeman dislikes. Tendi isn’t thrilled with her own performance in the conference room, which leads to a brief but encouraging conversation with Doctor T’Ana (Gillian Vigman) – the senior officer Tendi is actually inspired by – where the doctor asserts Tendi may need to “make a mess of things” to prove herself.

Channeling T’Ana’s advice on sticking out from the crowd, and clearly fueled by her frustration at seeing the two captains argue over a statue, Tendi does something out of character: she smashes the rock, which actually helps expose what’s really going on between the planet’s natives and the Federation scientists. The two groups faked their initial hostility and allied to secretly learn, and then hopefully sell, top-secret Federation information on the black market.

With the mystery solved, let’s reflect on some elements of this episode that might play a role in future episodes. We’ll be curious if the flattering assessment of the Cerritos as described by the Carlsbad crew leads to changes in behavior for our ensigns. Will they start to consider themselves higher or more important than the other Starfleet support ships? But more importantly, this episode introduces some new character dynamics we’ll want to pay attention to. Now that Mariner’s secretive attraction to Jennifer is known, will we see that go public? Will Tendi’s unofficial mentorship with Doctor T’Ana, and her official mentorship with Migleemo, impact her future on the Cerritos?  Lower Decks so far this season is keen on turning a careful eye to our ensigns’ motivations, and showing how these characters could possibly grow from those motivations. This, in addition to continued attention to detail for the Star Trek universe, make this show as enjoyable as ever.