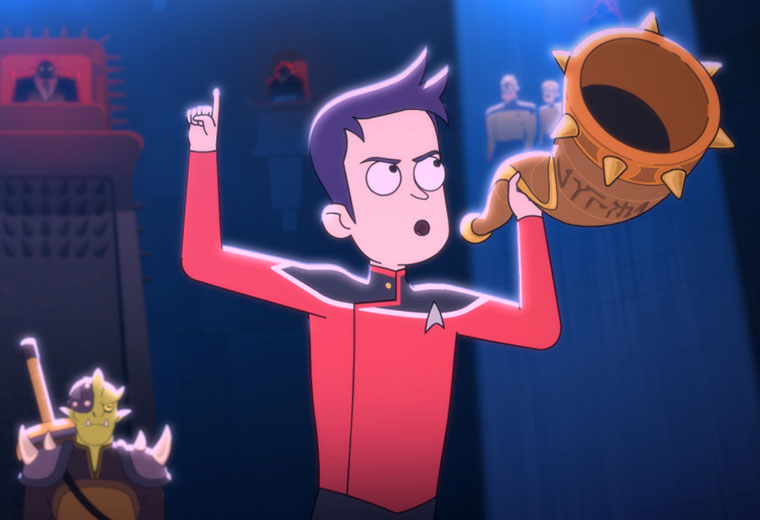 Episode 8 of Lower Decks will surely go down in the history of this show not only as a wildly funny entry, but as an episode that provides us with our best look yet at the show’s thesis statement: that lower-deckers are unimportant, and Starfleet isn’t as superior as some may think.

In this way, “Veritas” could have easily been a great pilot, as it gives us glimpses of each of our ensigns and how their view of Starfleet isn’t the same as the one we are used to. To tell this story, we are dropped right onto the planet K’Tuevon Prime in the middle of our ensigns seemingly on trial for a secret mission that recently happened, and each ensign hilariously recalls their part in the mission.

In a courtroom reminiscent of the Klingon court from The Undiscovered Country, and administrated by Clar (Star Trek veteran Kurtwood Smith), our ensigns are forced to recall the events of a secret Starfleet mission that they supposedly participated in with members of the Cerritos‘ senior staff. Of course, while the courtroom scene in Star Trek VI was anything but comical, the recollections provided by the ensigns are top-tier Lower Decks humor. Rutherford (Eugene Cordero) has trouble relating his story because his cybernetic implant kept malfunctioning, showing us random parts of his role in the mission. Tendi (Noel Wells) is innocently caught up in a mission to Romulus with Commander Ransom (Jerry O’Connell), where she proves to be a valuable asset in stealing an alien item. And Mariner (Tawny Newsome) explains how she and Boimler (Jack Quaid) were late in reporting to the bridge during a red alert, and how they tried to fake their way through the alien encounter – leaving Clar aghast at how a Starfleet officer isn’t always aware of ship operations.

It’s at the end of the ensigns’ testimony that Boimler gives what might as well be creator Mike McMahan‘s show pitch. Boimler tells the aliens that in real life, not everybody in Starfleet is equally important or knowledgeable. He claims not even the Cerritos‘ senior officers are as moral, intelligent, or respected as other Starfleet officers. And most damning of all, he says that the ensigns actually don’t know anything important about the supposed secret mission the aliens are accusing the Cerritos’ crew of taking, because they aren’t important enough to know such things. As Boimler says to Clar, “we’re not important enough to have anything to lie to you about.” However, Boimler maintains that while lower-deckers and the Cerritos‘ bridge crew may not be impressive, they still adhere to Starfleet principles. This is the entire premise of Lower Decks, isn’t it? In this way, this episode would have perfectly fit as an introduction to the show. Nothing against the impressive pilot, but this episode shows better than any other thus far about the lower-deckers’ lot in life. Indeed, it tells the truth of the show. And what is the Latin word for truth? Veritas.

In typical Lower Decks humor, the “trial” turns out to be something far less serious: a party in Starfleet’s honor. Clar actually was rescued by the Cerritos‘ crew from the Romulans, and he wants to celebrate the accomplishment and simply get an account of the event. This conclusion tops off what is arguably the best Lower Decks episode thus far. Combining an intricate plot, hilarious Star Trek callbacks, and a satisfyingly Star Trek-esque theme, “Veritas” sets a high bar for the remaining two episodes of this season.

New episodes of Star Trek: Lower Decks are released on Thursdays on CBS All Access in the U.S. The series returns next week (October 1) with the ninth episode.