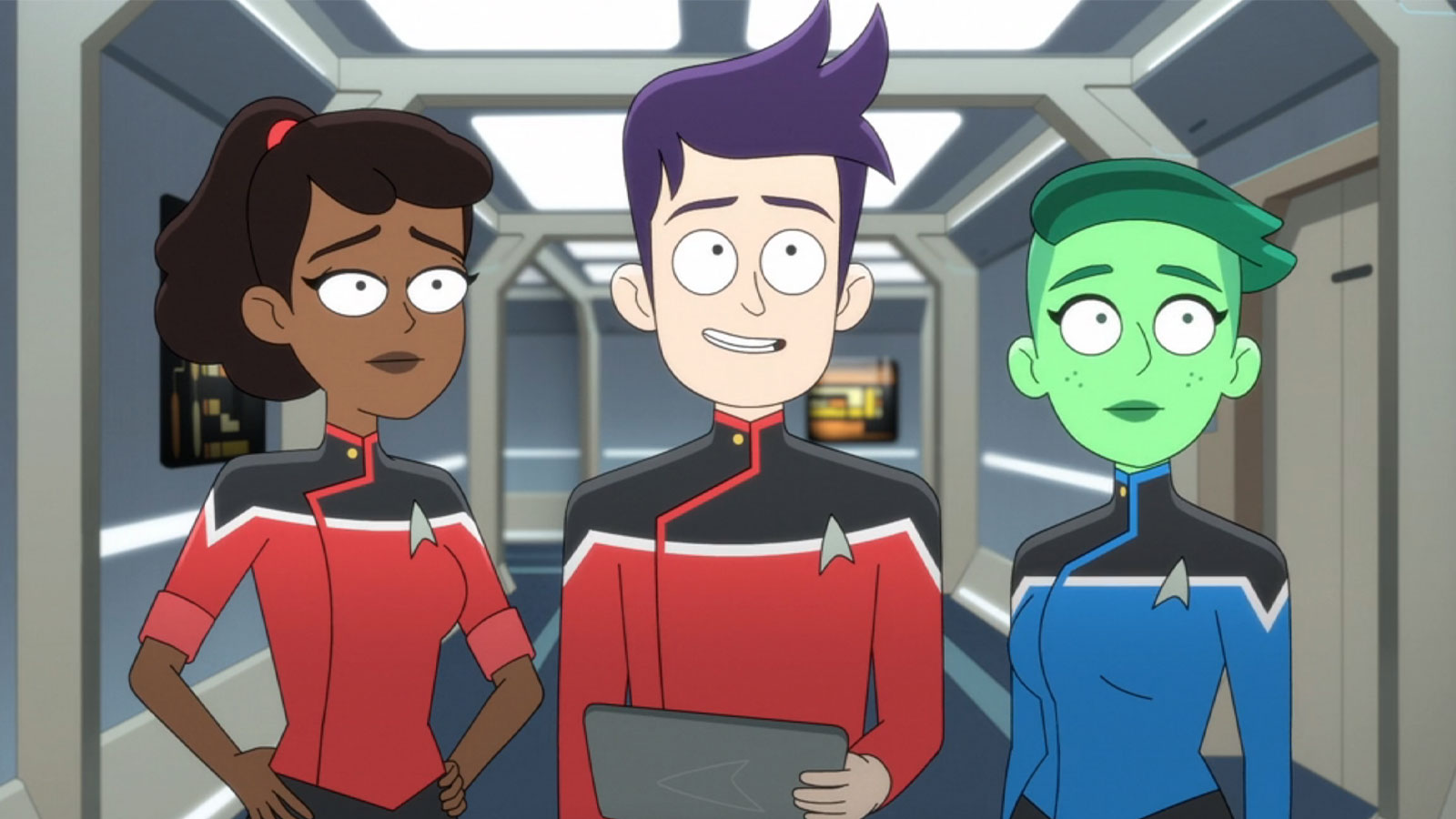 Star Trek: Lower Decks‘ keen focus on personal motivations and development continues in “Room for Growth,” an episode that sees our ensigns confronting new challenges in the name of supporting themselves and the crew.

The episode begins with a thinly veiled but goodhearted roasting of one of The Next Generation’s most… ahem… infamous episodes: “Masks.” That episode had a fairly wonky plot involving, well…masks, and here in Lower Decks it seems Captain Carol Freeman (Dawnn Lewis) gets inhabited by similar entities. Dealing with the captain and the damage she causes is too much on the Cerritos’ overworked engineering team, so the captain, once she is unpossessed, schedules Lieutenant Commander Andarithio Billups (Paul Scheer) and his team, including Ensign Rutherford (Eugene Cordero), to take some time on the Dove, a Federation-associated relaxation ship.

Despite offering the best relaxation techniques this side of Risa, all guided by the ship’s leader, Toz, the engineering team just can’t seem to take it easy and stop trying to solve engineering problems. This frustrates Freeman, who thinks their inability to relax is an insult to her. She doesn’t think the crew respects her enough to follow an order as simple as relaxing, and she herself loses her mind with anger. Now, it’s the captain who can’t get a grip on herself.

Freeman’s engineering crew are brilliant, however, and quickly muster their problem-solving skills to create a device that instantly restores Freeman’s peaceful state of mind. So, things work out pretty well for the engineering team, who are now calmed more than ever because they find problem-solving the most relaxing thing in the world, and the captain herself is back to her proper state of mind – although how actually the engineers created this magical relaxation device would have been welcome information. As it stands, this plot ends somewhat with a disappointing deus ex machina. How can we be impressed by the engineers if we aren’t told why or how their device works so well?

Back on the Cerritos, Ensigns Beckett Mariner (Tawney Newsome), D’Vana Tendi (Noel Wells), and Brad Boimler (Jack Quaid) are facing a dilemma of their own that could have repercussions for their friendship. There are new quarters opening higher up on the ship, and the ensigns see this opportunity as a ticket to get out of the crowded lower decks barracks. However, thanks to some convenient eavesdropping by Tendi, the ensigns learn Delta Shift, their arch-rivels, are also applying for the new rooms. To try and beat them to the terminal that controls the new room applications, the three ensigns travel through the lesser-known parts of the ship to try and circumnavigate Delta Shift’s path.

“Let’s go gray area the [bleep] out of Delta Shift!”

Mariner as she, Tendi and Boimler embark on the self-admitted ethically gray mission of sabotaging Delta Shift.

The depths of the ship the ensigns travel through are pretty interesting. For example, they travel into the deflector dish, something we’ve never seen in any Star Trek show before, and through a swamp area, where two of three ensigns experience a major trip. Hooray for the possibilities that open thanks to animation! Most importantly, the challenges the ensigns face in their trek allow Boimler to reassert his new “bold Boimler” persona, a personality change he implemented in “The Least Dangerous Game” but was seemingly forgotten in last week’s episode. Bold Boimler does indeed help the ensigns, even after the Betas are initially fooled by Delta Shift’s faux-peacemaking efforts.

The end of the journey finds the ensigns discovering they misunderstood the new room availability: there is actually only one room available on deck four, not four rooms available on deck one. In a show of solidarity, the ensigns forgo the option for one of them to apply for the room, opting instead to stay together in the lower decks to maintain their close friendship. This is what differentiates the Delta Shifters and Beta Shifters; our heroes think the Deltas would forgo their own friendship if only one of them could get a new room assignment. The jokes on Beta Shift, though, as Delta ultimately just shoves four beds into one room, but the lesson remains: friendships are stronger when you stick together.

Call us crazy, but we can’t help but ponder one of Mariner’s lines at the end of this episode. She jokingly asserts that their futures hold three things that will separate them: she will ultimately get kicked out of Starfleet, Tendi will become a bridge officer, and Boimler will end up dead because of his new “bold” personality. The line is delivered as a joke, but a part of us feels this could be foreshadowing. We certainly wouldn’t put it past this show’s writers. (If our Boimler were to kick it, just remember there is another Boimler currently serving on the Titan.)

Taken together, “Room for Growth” is an enjoyable episode that highlights totally different parts of the Cerritos we’ve never seen, something that would be a production impossibility in classic Star Trek. More importantly, though, our heroes showcase deep respect for one another and strengthen their friendship perhaps more so than any other act we’ve seen the group do. While the conclusion of the relaxation plot is somewhat disappointing, Lower Decks rarely falls into such narrative traps as a deus ex machina that they are easy to forgive when one happens. This season has thus far done a great job of bringing our heroes closer together, and “Room for Growth” is perhaps the best example of this so far.