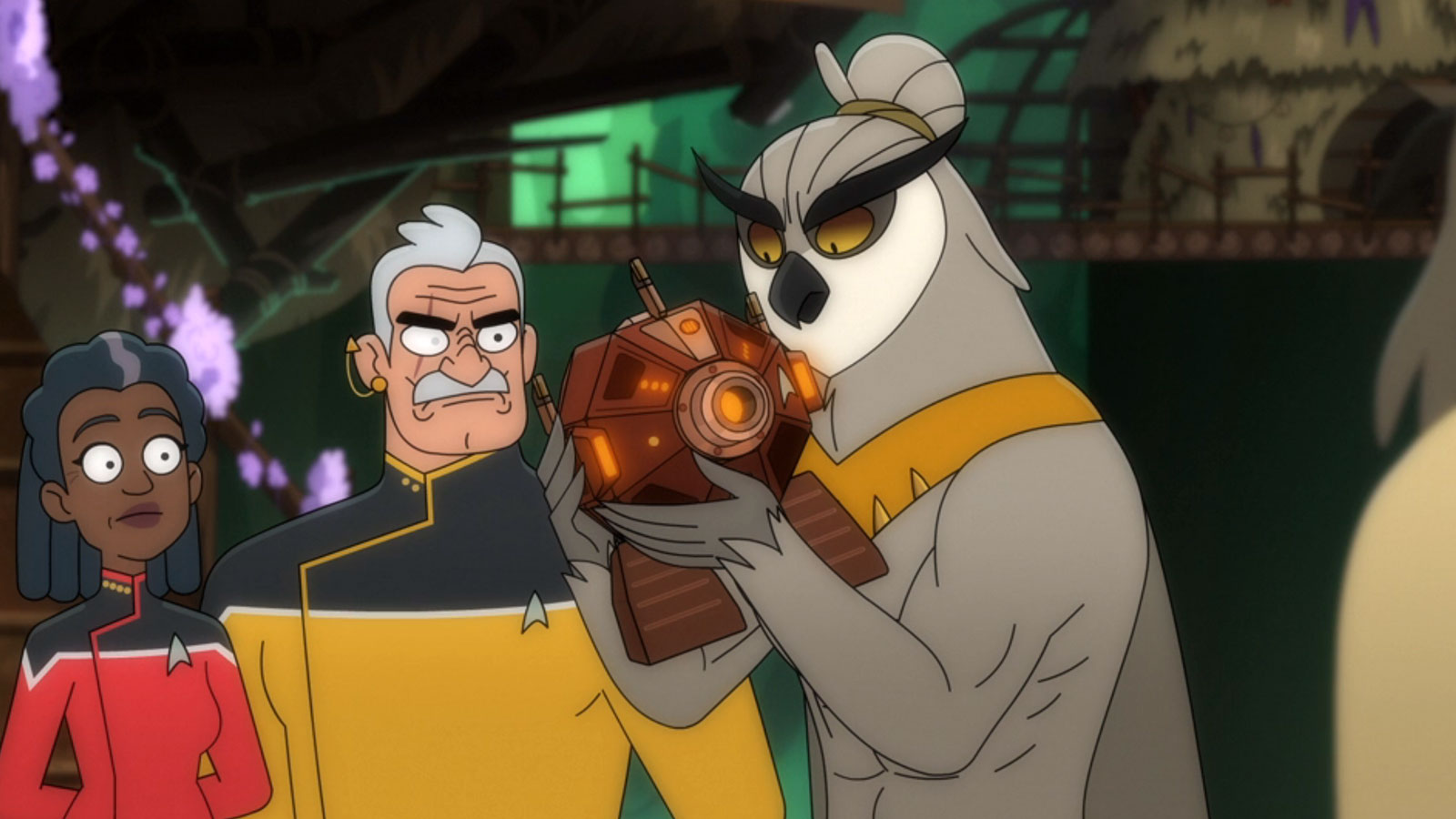 This week’s Star Trek: Lower Decks takes a break from our usual cast to focus its attention on a forgotten and temporary member of the Cerritos’ crew, but there is definitely more at play here than meets the eye.

Cast your minds back to the first season finale for Lower Decks – you know, the one where William Riker shows up in the Titan to save the day. In that episode, we were introduced to Peanut Hamper (Kether Donohue), an exocomp who refused to partake in the mission to destroy the Pakled ship that was dismantling the Cerritos. Peanut Hamper cast herself adrift in space instead, waiting to be rescued, and we see in the opening moments of this episode her view of the battle with the Pakled and the subsequent arrival of the Titan. Her rescue never came, however, until this week, but it wasn’t quite the rescue she was expecting.

After narrowly avoiding capture by Drookmani scavengers and crash landing on the planet Areolus, which is run by sentient and technologically primitive bird-like creatures, Peanut Hamper becomes a miracle of sorts. She uses her advanced technology to make the bird creatures’ lives healthier, more productive, and overall better. But her presence isn’t without controversy, as the Areolusians are for some reason fearful of the technology Peanut Hamper represents.

“You are the first visitor in my lifetime.”

“I beg your pardon?”

“Yeah, it’s just something we space folks say when we’re stranded on a backwater planet with no culture.” – Peanut Hamper and Kaltorus, the village leader.

Not every Areolusian is fearful of Peanut Hamper, as the village leader’s son, Rawda, is tasked with guiding the exocomp around the village. After saving Kaltorus’ life, making sure all the eggs in the village’s nursery hatch successfully, and generally spending time together, the two fall in love (believe it or not). The absurdity of a robot and bird-man falling in love isn’t lost on the show’s production team, and you’ll likely get a few laughs out of seeing these two disparate creatures getting physical.

The attachment Rawda and Peanut Hamper share means Rawda feels he can show the robot the relics of his ancestors, and it’s here we learn the Areolusians were indeed once space-going creatures. The Areolusians were always fighting themselves or others because of this technology, so they cast it aside in favor of more primitive life. This revelation helps Peanut Hamper voice a revelation about herself: that she always cast aside fragile organic creatures like the Cerritos crew because she thought they weren’t important enough, but now her experience with the Areolusians has helped her realize fragile life is worth caring about. It’s an honest self-reflection from a character who sorely needed such a revelation.

Some time passes and on the wedding day of Peanut Hamper and Rawda, Drookmani scavengers show up to seek out the robot who escaped their grasp earlier in the episode.  But the Drookmani aren’t so much interested in Peanut Hamper as they are in the ancient ships beneath the planet’s surface, and they start forcefully excavating the vessels.

Almost 17 minutes into this episode, we finally return to the Cerritos, where the crew picks up on what the Drookmani are doing thanks to a distress call from Peanut Hamper. On the planet, the robot determines she is the only one who could get aboard the Drookmani ship and stop them from destroying the village and her newfound friends – and here is where Peanut Hamper can come full circle, to redeem herself from her actions during the battle with the Pakleds. This time, she does the heroic thing and stops the Drookmani. Moreover, she proclaims to Captain Carol Freeman (Dawnn Lewis) that her service in Starfleet up until now has been selfish, irresponsible, and conduct not worthy of a Starfleet officer, but her time with the Areolusians has changed her perspective and that she’s willing to rededicate her life to Starfleet. If this seems all too good to be true, it is, but we’ll get to that in a moment.

In a last-ditch attempt to steal the Areolusian ships, the Drookmani transport into one of the ancient vessels and start using it to continue attacking the village and then the Cerritos. But the Drookmani have a revelation for the Cerritos crew: they were actually drawn there by a call from a “prissy little robot.” Shocker! Peanut Hamper told them the ancient ships were there for the taking and that the Areolusians would offer no resistance. Apparently, she thought she could orchestrate the conflict between the Drookmani and the Areolusians to prove to Starfleet she could be a hero and thus avoid punishment for abandoning the Cerritos, which leaves Rawda to save the day aboard a different Areolusian ship.

This leaves Starfleet to decide Peanut Hamper’s fate. At the end of the episode, she is slightly unhinged at the idea of being punished. So, Captain Freeman decides to lock her up in the Self-Aware Megalomaniacal Computer Storage, as seen in “Where Pleasant Fountains Lie,” which means she is right next to a familiar face (voice?): AGIMUS, voiced by Star Trek veteran Jeffrey Combs, who is reprising his character from the aforementioned episode. What the two robots aim to do together is clearly for a future episode.

So, let’s break this down. The fact that an entire episode (complete with bespoke opening credits) is dedicated to Peanut Hamper, a character we never expected to see again, makes us think that “A Mathematically Perfect Redemption” is clearly just the next entry in Peanut Hamper’s ongoing story. Taking a break from a show’s main characters is always a risky endeavor. While as a standalone episode this week’s entry wasn’t up to Lower Decks’ usual par, we think this is one of those times when this episode will function better when played with its preceding and succeeding arc episodes. Who knows where the story of Peanut Hamper is leading, but since Mike McMahon has pleasantly surprised us before with smart multi-episode storytelling (just think of Rutherford’s implant arc), we’re excited to see what role Peanut Hamper ultimately plays in Lower Decks writ large.

The fact that she is likely sticking around for a bit is great, as Peanut Hamper is an intriguing character. Donohue voices her perfectly. She’s entirely anti-Starfleet, joining the service only to make her dad mad, and disrespects her colleagues at every turn. She has little respect for other cultures, totally disregards the Prime Directive, and doesn’t shy away from mocking those she is around, especially those who she thinks are inferior. To make that character any sort of likeable is an achievement, and it’s even more of an achievement that we care at all about what happens to Peanut Hamper next. It’s just too bad we’ll likely have to wait for next season to find out.