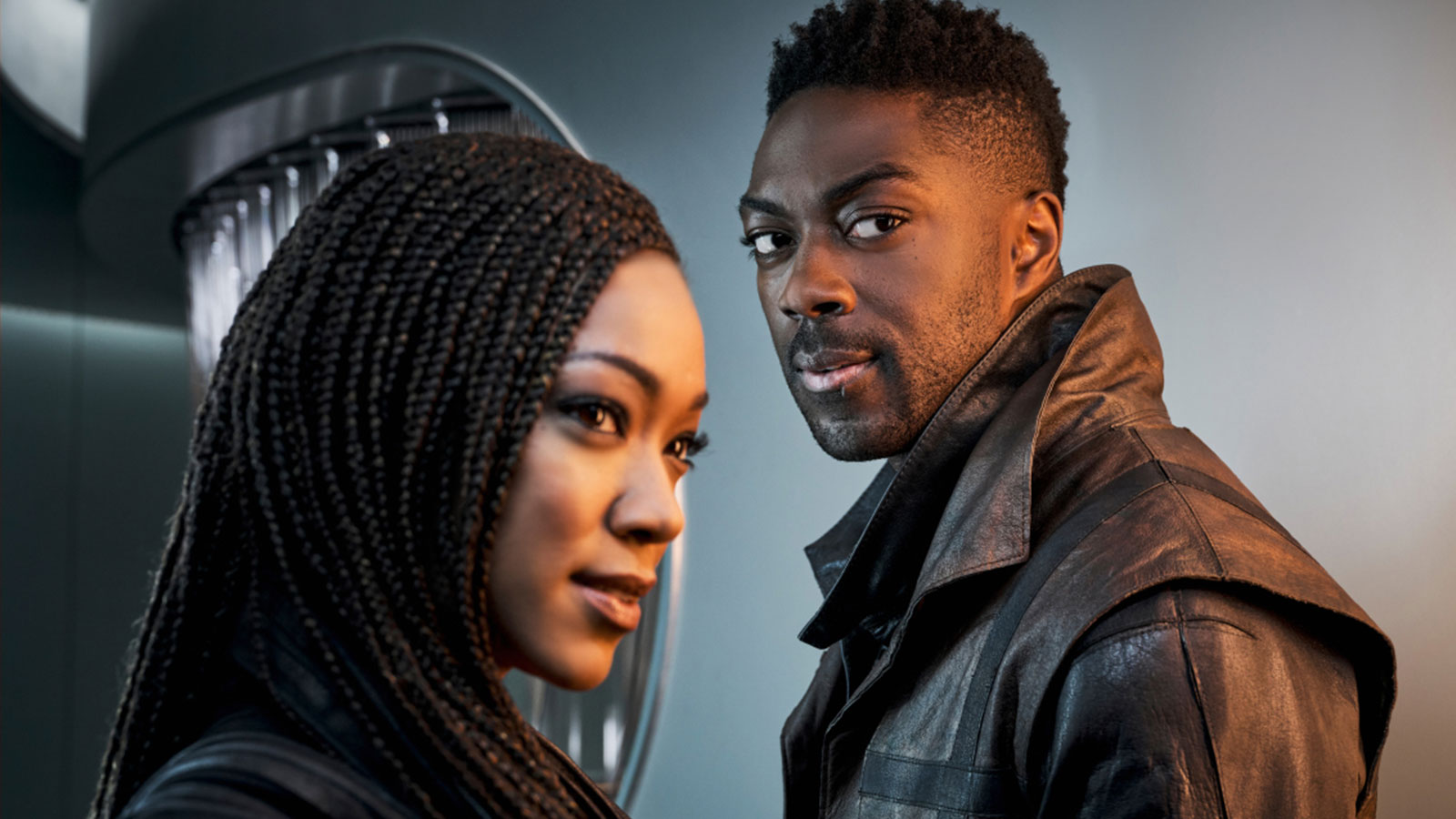 For many of us, 2020 was a horrible year on almost every front—except when it came to the final frontier. The last 12 months were nothing short of thrilling for Star Trek and a large portion of its fanbase. The year not only heralded the return of the iconic Patrick Stewart in his own original series Star Trek: Picard, but also introduced a whole new take on the universe with the comedic animated series Star Trek: Lower Decks. Additionally, we saw the highly-anticipated third season of Star Trek: Discovery, along with a barrage of exciting announcements of Treks-yet-to-come (including Star Trek: Strange New Worlds and Star Trek: Prodigy). Not since, arguably, the mid-1990s had so much new Trek been beamed into our lives.

And I was here for it.

Now that the third season finale of Star Trek: Discovery has aired – and the 2020 streak of new episodes and series has come to an end – I’m not afraid to admit that I’m going through a little bit of withdrawal. Thankfully, we now have just over 800 hours of Trek to tide us all over until our next fix!

Like many, I enjoyed Discovery’s third season and looked forward to each new episode with enthusiasm. However, while big and bold in its new direction, I found this season uneven. So, as I did with Discovery’s inaugural and sophomore seasons, here’s a list of seven things I loved – and a few I didn’t – about the latest adventures of the USS Discovery’s intrepid crew.

Star Trek is arguably at its best when it takes big narrative bets. The third season opener “That Hope is You, Part 1” was definitely a big bet and one that paid off immensely. Under the masterful direction of Olatunde Osunsanmi, Discovery has never looked better nor has it ever felt so vast and full of potential. The episode – which focused almost singularly on Michael’s literal crash landing in the 32nd century – was cinematic in look and feel, and simultaneously intimate. The episode, shot on location in Iceland, had a blockbuster scope. “That Hope is You, Part 1” is among my favorite episodes of the entire series and the show’s best season opener to date.

The central mystery of this season – the Burn – turned the entire Trek Universe upside down. From a storytelling perspective, the Burn was an audacious direction for the show; one that I found extremely thought-provoking. Starfleet, the Federation, the galaxy at large has been critically crippled and has to ration warp travel due to a shortage of dilithium? Dilithium was now a rare commodity that factions were fighting over? As Spock would say, “fascinating.” What does it mean to Starfleet (to Star Trek itself) when you can’t go boldly where no one has gone before? The Burn was simply a great hook to hang the entire season on.

The ships, the uniforms, the tech (programmable matter!), Discovery’s retrofit – 32nd century Starfleet worked beautifully and looked stylish. Admiral Vance (Oded Fehr) and Kovich (David Cronenberg), the personifications of this new Starfleet, are welcome additions to the Discovery pantheon. Vance, like Admiral Ross before him, is that rare Admiral you like, trust, and would follow. Played with gravitas by Fehr, you believe that Vance has been through hell and is that principled yet driven officer who bears the weight of the galaxy on his shoulders. On the other end of the spectrum, we know nothing about Kovich – not even his name was uttered, we only know it because of promotional material. Is Kovich Section 31? Is he the “future guy” from Enterprise? Why is he so high-ranking? Whoever he is, he follows his own mantra, and we don’t trust him. I can’t wait to see more of him (for the record, casting Cronenberg was a stroke of genius). The crew of Discovery now belong to the 32nd century, and I very much look forward to exploring more of this new timeline – as are, no doubt, the Discovery writers, now free from the shackles of Trek canon.

Michael Burnham is my favorite Discovery character. I’m always rooting and wanting the best for her. I appreciate the care, joy, and strength that Sonequa Martin-Green infuses in Michael. I particularly like third season Michael – she was relaxed, more confident of who she was and what she wanted. This was largely due to the introduction of Cleveland Booker, who’s brought to life by the extremely charming David Ajala. Book serves as a confident, equal, and, at times, a foil to Michael. While Michael has friends and loved ones on Discovery, she’s never had someone who she’s completely relaxed around, until Book. Book and his dynamic with Michael were extremely welcome additions to the show. I look forward to seeing how their relationship develops and how Michael continues to evolve because of it.

“The Vulcans changed their name?” Like the Burn, changing Vulcan – the quintessential Star Trek alien race – to Ni’Var was a brave move and boy did I like it. While I didn’t care for Michael’s mother (Sonja Sohn) showing up (it felt contrived and pulled me out of the episode), I liked everything else about “Unification III.” We’ve been dealing with stories of Vulcan/Romulan unification for almost the entire length of the franchise and I found this episode – deep in Trek history, lore, and tropes – to be captivating. It was a gratifying culmination of not just “Unification parts I and II,” but also Star Trek (2009) and Star Trek: Picard. It was an hour of television that only Star Trek could do and I hope that the story of Ni’Var – and its multiple factions – is continued far into the Discovery’s future.

Return to the Mirror Universe

It was fitting that the show bid farewell to Mirror Georgiou (Michelle Yeoh) by stepping through the looking glass once again. Mirror Georgiou was always at her best when she was not quite sure of herself. The Guardian of Forever, who made a welcomed and atmospheric cameo, sent Philippa back to her Universe and back in time to give her the opportunity to remake herself; this two-parter had a wonderful “Christmas Carol” air about it. Sure, we got all the staples of the Mirror Universe – over-the-top evil versions of our cast as well as plenty of fights, torture, and backstabbing – but we also got nuance and a conflicted Georgiou. “Terra Firma, Parts 1 and 2” were fun episodes that gave Georgiou a timely and fitting send-off. No doubt we will cross paths with Mirror Georgiou again, in a Trek-yet-to-come, but she’ll be – because of the Guardian of Forever – a more multifaceted and self-aware character.

The finale, “That Hope is You, Part 2,” was not among my favorite hours of the season. However, the episode’s closing sequence was among the best moments of Discovery to date. The season’s final minutes – which culminated in Michael being promoted to Captain of the Discovery – were rousing, uplifting, and full of possibility; Star Trek to the core. I felt “emotionally compromised” when Michael bumped into the newly commissioned Lt. Sahil (Adil Hussain); their joy at seeing each other was infectious. Equally as moving, when we witnessed the now Captain Michael Burnham says to her crew, “Let’s fly.” Ending with a quote from Gene Roddenberry, while the original series theme played in the background, was nothing short of soaring!

Elements that missed the mark:

Khan; Gul Dukat and Kai Winn; the Borg; the Dominion, Trek knows how to do good villains. Villains who are layered, cunning, and whose intentions are understood and almost relatable. Sadly, the Emerald Chain does not join the ranks of good Star Trek villains. Basic mafioso types, the Chain were nothing more than mustache-twirling thugs who the crew of Discovery had to deal with. Osyraa (Janet Kidder), the leader of the Chain, was forgettable and, despite murdering members of her own family and squad, extremely non-threatening. At no point did I believe that any of our heroes were in real danger when facing off against the Chain. We failed to learn anything substantial about this “federation of mercantile exchanges,” their ambitions, or motivations; they just wanted power and control. Even the best scene featuring the Chain – Osyraa squaring off against Vance at Starfleet headquarters in “There Is a Tide…” – came up short. For a split second, the Chain had real potential – they were gunning for legitimacy from the powers that be (à la Michael Corleone in Godfather Part III). But this ultimately went nowhere and just as quickly as the idea was introduced, it evaporated. Let’s hope that if the Chain is back, they’re significantly more threatening and nuanced.

Discovery would benefit from some ‘low-stakes’ episodes; episodes that focus on nothing more than our characters. With each passing season, Discovery gets faster and more intense. While this gives the series momentum, Discovery should have more stand-alone, character-focused episodes. Three seasons in and Discovery has no equivalent episode to DS9′s “Bar Association,” a Voyager’s “Someone to Watch Over Me,” or Enterprise’s “Carbon Creek.” I like Discovery’s crew and I’d like to see them when they’re not focused on solving the season’s mystery. Think how great the show is when Burnham and Tilly are just talking in their quarters, or how wonderful the dancing scene between Burnham and Stamets is in “Magic to Make the Sanest Man Go Mad.”

By periodically slowing down, the series would have the breathing room to show us, not simply tell us, about our characters, their relationships, and their development. I buy that Stamets (Anthony Rapp) and Culber (Wilson Cruz) would take Adira (Blu del Barrio) under their wing, but it felt jarring when Stamets first refers to Adira as his “child.” That didn’t seem quite earned. I’m not suggesting moving away from season-long arcs, I just want to spend more time with our crew when they’re not in peril or saving the galaxy. Every other Trek has managed this, so should Discovery.

As mentioned, I loved the central mystery of the Burn. However, the cause of the Burn was extremely ungratifying. I’m not advocating for it to have been some massive galaxy-wide catastrophe. In fact, I quite liked that the root cause of the Burn was linked to the emotional and physical well-being of one lonely individual; that is itself a quite brave rationale and one that is extremely Sci-Fi. However, I felt that the mystery’s resolution, when it finally came, came fast and lacked the intended emotional effect. For the same reasons listed above, I didn’t connect with Su’Kal. The reveal felt too fast a resolution given the gravity of the mystery. It was another (probably the ultimate) example of how spending a little more time with our characters (in this case Su’Kal) would pay dividends.

There you have it Trekkies: my list for season three. Obviously, the above is far from definitive, and just my opinion, so please do let me and the rest of the TrekNews.net crew know what you think in the comments below or on social media. I look forward to reading your takes.

In the meantime, live long and prosper!