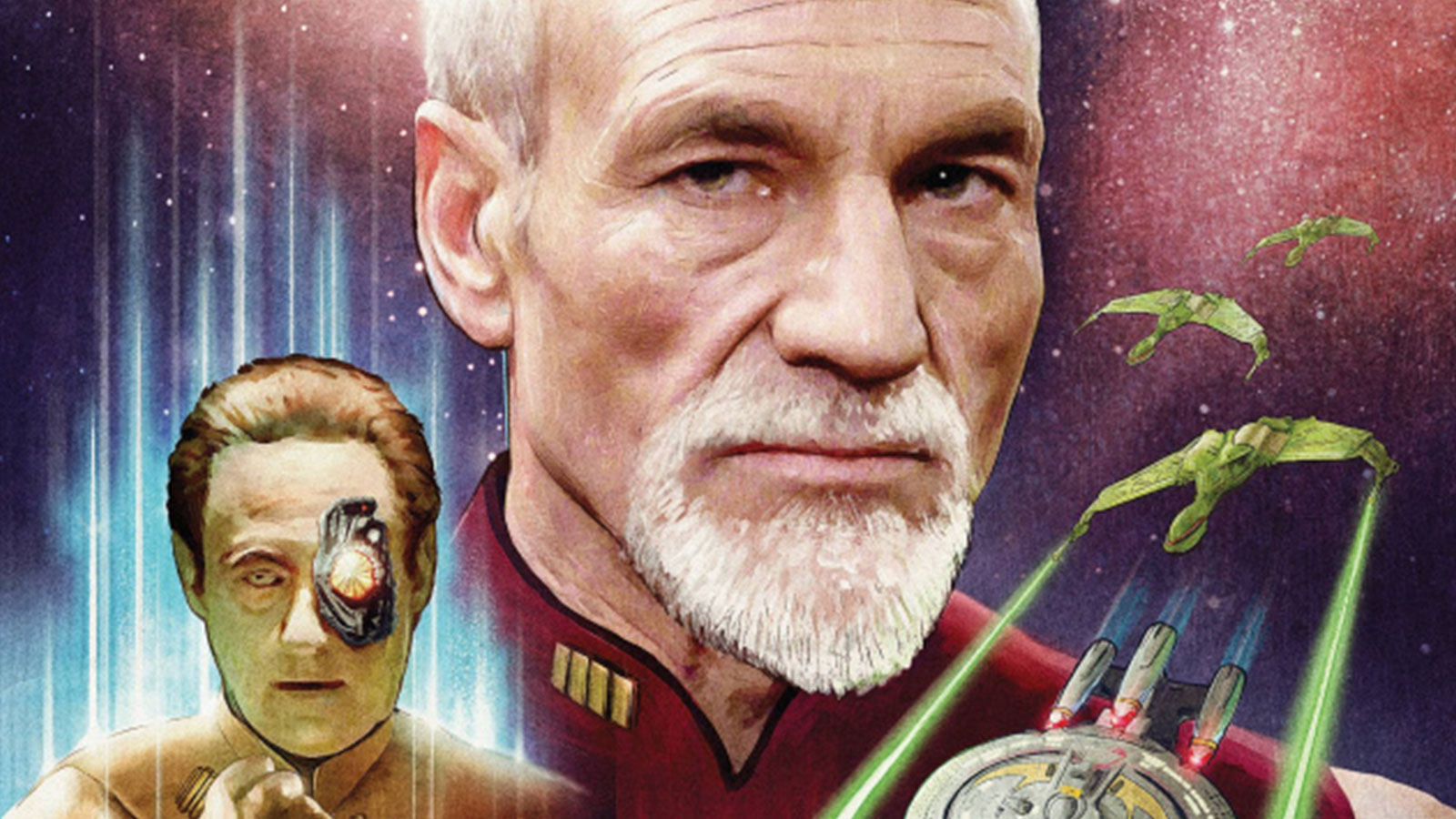 Following a crushing defeat in Through The Mirror and the critical loss of a crew member in Terra Incognita, the ISS Enterprise’s crew find themselves at their lowest point yet. Constantly stalked by their enemies, constantly harassed by the Empire for their lack of results, Picard and his crew chance upon a potential breakthrough, but is it too late?

The Tiptons’ exceptional writing and the promising art of Carlos Nieto kick off the year-long journey in the Mirror War with menace and intrigue.

The last time we saw the Terran TNG crew, was in January 2019, and Star Trek: Terra Incognita was concluding with issue 6. This miniseries, the third in the TNG Mirror Universe saga, ended on a cliffhanger and for all intents and purposes even though an update of a sequel felt imminent, we received no news on its future from IDW. The series disappeared for over two years like a Klingon bird of prey. In May 2021, to everyone’s pleasant surprise, the sequel – Mirror War – was announced with Scott Tipton and David Tipton, writers of all three prequels, returning and Carlos Nieto taking over the interior art. We learned that the series’ co-creator JK Woodward would grace the series as well with cover art from issue one onward. My adoration for Woodward’s art is well documented on this site but one look at his cover art is enough to confirm that they alone make every issue worth the cover price. But I digress.

Spoilers for Star Trek: Mirror Broken, through The Mirror and Terra Incognita, follow.

The one-line summaries here won’t do justice to the full experience of reading the three prequels to Mirror War but they’re necessary for new readers to understand the context of our new series. In Mirror Broken we are introduced to Terran Picard who puts together a crew to steal the Empire’s new secret weapon: the I.S.S Enterprise. In Through The Mirror the crew, now in possession of the ship and with a plan to build an unconquerable fleet to fight the Klingon-Cardassian Alliance, jumps to the Prime Universe to steal their Enterprise. In Terra Incognita after the Terran Enterprise retreats in defeat without a ship, unbeknownst to everyone, Terran Reginald Barclay has snuck on Enterprise Prime. He gets up to all kinds of shenanigans with the innocent Prime Enterprise’s crew.

Mirror War 0 picks up some time before Terra Incognita‘s events begin but this time in the Mirror Universe. Picard and his teammates, once hailed as the beacon of renewed hope for the Empire in their fight against the Alliance, are now scavenging abandoned ships in hopes of finding table scraps that they can get away with easily. It’s been months since Picard’s team delivered any meaningful results to the Empire. They’re desperate for answers. Picard’s desperate for a victory and without a reliable recon expert like Barclay in his crew, he’s starting to feel hopeless. When the latest scavenging mission ends in disaster Picard is summoned to the Imperial Palace to be humiliated in person. An increasingly frustrated Picard hatches a new plan along with Riker. They return to the Enterprise to find that Geordi and O’Brien have made a startling breakthrough in their effort to reconnect to the Prime Universe, one that puts them on a direct collision course with Barclay on Enterprise Prime.

The Tiptons continue their long, decades-spanning streak of good Trek comic writing with Mirror War 0. The comic is surprisingly fast-paced, a swerve from the Tiptons, who usually open series with slower issues. It’s also heavy on the combat which has been the exception, not the rule, for an opening issue penned by the Tiptons in my experience. Neither of these are complaints though. Things move fast in the Terran Empire after all so you’re the one who needs to keep up. Thanks in no small part to Nieto’s art the combat scenes flow and weave together smoothly. A note for new readers of Tiptons’ comics: Tiptonisms are back in the issue as well. As coined in my review of Too Long A Sacrifice #1 a Tiptonism is a dialog or caption bubble filled with thirty to fifty words, much higher than the typical maximum amount of twenty-five we see in comics today. It’s a choice much more common in Golden and Silver Age comics but almost jarring in comics today. I have grown to look forward to them now.

When making art, especially when picking up where a previous artist left off, a common expression is: you can strive to be worse than, better than, or different than the previous artist’s work. It looks like Mirror War‘s artist Carlos Nieto chose to be different than artists of the prequels, most noticeably Woodward. Good for him. Due to the fundamental difference in their styles (Nieto is a digital artist while Woodward paints his pages) trying to emulate Woodward’s art style would have likely yielded poor results. Nieto also, rightfully, decided to leave his strong mark on the series and revitalize the universe in a new, bold vision.

The Terran TNG crew retain their basic features but are presented with a completely different palette. Picard, who we spend the most time within the issue, is even more jacked and terrifying than before, looking more like a Street Fighter character than Sir Patrick Stewart with a French beard. This works particularly well in his favor when he’s kicking heads in and cracking skulls. DC Alonso’s color schemes with their neon-infused sheen pack an extra visual punch. This particular penciler-colorist duo is a deadly combination, readers. Watch out!

I also didn’t want to leave this space without mentioning Nieto’s evolution as a penciler. We last saw him drawing Trek in Terra Incognita in 2018 and clearly, he has come a long way since then. I see your growth, Nieto, and I appreciate it.

Mirror War 0 offers plenty of action, setup and leaves you with an ending that gets you hyped for the rest of the series. The Tiptons and Carlos Nieto with this fiery opener have thrown down the gauntlet. Their signal is clear: it’s universe plundering time.