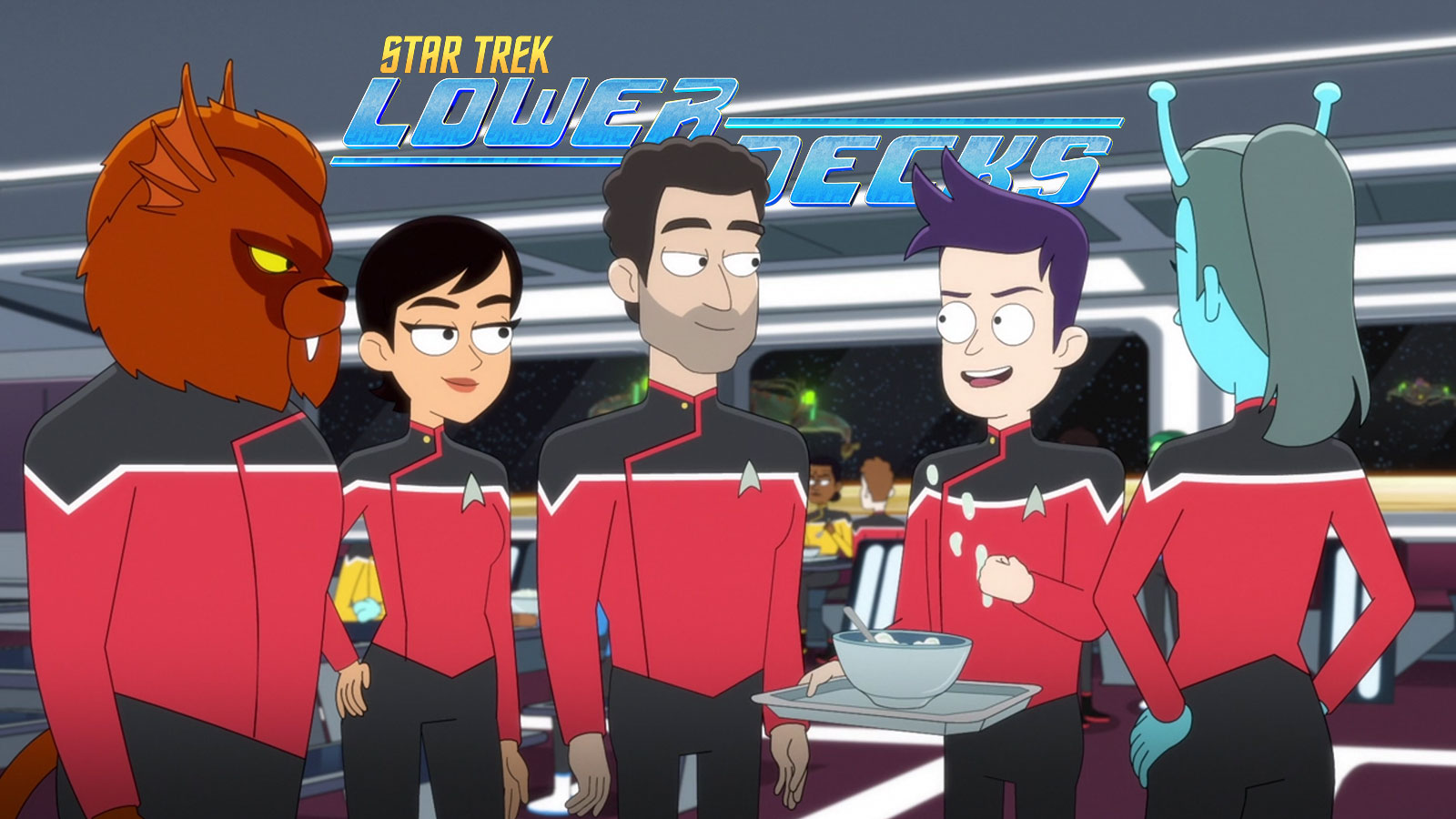 Hot off the heels of last week’s fantastic “An Embarrassment of Dooplers,” Star Trek: Lower Decks shines with “The Spy Humongous,” an episode that offers laughs aplenty and another reminder to the audience that the Lower Deckers are, in some ways, more special than the hero officers we know and love.

After being assigned anomaly clean-up duty, our four ensigns have various feelings about the menial task. Boimler (Jack Quaid) and Tendi (Noel Wells) are excited to visit bridge officers’ quarters and gather discarded alien items from the ship’s various missions, but Mariner (Tawney Newsome), true to form, and even Rutherford (Eugene Cordero) thinks it’s a waste of time.

Once again, Lower Decks presents us with a situation that crew members across various Star Trek shows likely had to do. How many nicknacks and trinkets did the crew of, say, Voyager or the Enterprise-D, pick up along their travels, and where did that material go? Well, now we know those items do get cataloged someplace, and someone has to go gather them all up. For our money, we think that when the show sets up situations that would be at home in the annals of any Star Trek show, we know we’re in for a good time.

Boimler, however, is accosted by a decision: should he join his fellow ensigns in clean-up duty, or run with a group of red shirts who are actively aiming for the acting captain position that’s up for grabs. The group thinks the world of Boimler after his stint on the Titan, and the ensign ultimately chooses to pursue acting captaincy with his newfound comrades.

This group of red shirts, led by Ensign Casey (Neil Casey), is one of our favorite parts of this episode. Not only do we see more of the hitherto background Kzinti character (who delivers a clever meta-joke about the Kzinti’s appearance in The Animated Series), but the group themselves represents everything the Lower Deckers isn’t: egotistical, thirsty for fame, and eager to be the “star” in “Starfleet” instead of a regular crewmember. Boimler, at least temporarily, is enamored with the group, and it’s entertaining seeing how different he becomes when he runs with the elite ensigns. Thanks to a redshirt “makeover,” we catch a look at what Boimler could be if he wasn’t Mr. Starfleet – but then he wouldn’t be Boimler, would he?

Abandoned by Boimler, the other three ensigns are tasked with the clean-up duty, and while Tendi habitually tries to make the boring task fun, Mariner and Rutherford are not having any of it. The Orion can only take so much negativity, and after being exposed to a mysterious emotion-changing cube from one of the bridge officer’s quarters, she turns into a raging scorpion who starts terrorizing the ship. Luckily, there’s one person who can calm her down through humor and good feelings: Boimler, who sheds his new red shirt persona, assumes a leadership role that the captain-seeking red shirts could never do and returns Tendi to her normal form.

Along the way, Boimler realizes that there’s plenty of merit to be had serving in the lower decks, and seeking the captain’s chair in such an aggressive way can showcase poor leadership. In fact, we think Boimler accurately sums up Lower Decks‘ spirit when he lambasts the red shirts for not charting their own path to the center chair:

“You know what’s shameful? Trying to build a persona by copying other captains. You think Riker did that? You guys are wasting your time on this red shirt stuff. Be your own captain!”

Boimler, to the red shirts.

This is basically the mission statement for the show. For all its references and callbacks to previous Star Trek, it’s not trying to copy anyone’s show. It’s making a name for itself by subverting the audience’s expectations and exploring life away from the bridge.

Anyway, all this is taking place as the Cerritos is visiting the Pakled homeworld, Pakled Planet, to try and negotiate a ceasefire; to no surprise, the Pakleds have ulterior motives during their peace talks. Despite being generally quite dull, like when the Pakleds keep mistaking Captain Freeman (Dawnn Lewis) for Kathryn Janeway, they do manage to get a spy aboard the Cerritos, which Commander Ransom (Jerry O’Connell) and Kayshon (Carl Tart) must handle.

After not appearing in a speaking role since his introduction in “Kayshon, His Eyes Open,” we’re thrilled to see more of Kayshon, and his predilection for combining the Tamarian language with English is still hilarious. He and Ransom trying to handle, and then find, the Pakled spy is a great B-story that continues the fascinating contrast Lower Decks has set up for itself regarding the show’s main bad guys – stupid on the outside, but powerful enough to pose a threat to Federation. At the end of this episode, Freeman tricks the Pakled leader into explaining their plan to smuggle a bomb onto Earth, so we’re really interested if such a threat ever materializes and how the Cerritos can help stop it.

Of course, the salient theme of this episode is that those seeking the captain’s chair – like the group of aspiring red shirts – aren’t what make ideal Starfleet officers. Rather, it’s those who do the dirty work and do more than just give heroic speeches. Having Boimler embarrass himself with food shenanigans to make Tendi laugh is a great illustration of this lesson. Interestingly, this episode does give us a peek at what Boimler could be if he marketed himself as captain material – will we ever see him finally in the center chair? Or perhaps after the events of this episode, his thirst for command is tempered?

We walked away from “The Spy Humongous” with a firm belief that Lower Decks is as confident as ever in itself. The humor is sharp and self-reflexive, the characters are fleshed out more with every episode, and we get the sense this season is leading to some kind of epic conclusion that involves the underestimated Pakleds. We can’t wait to see what happens next.

Lower Decks returns next week with the seventh episode of season two “Where Pleasant Fountains Lie” on Thursday, September 23rd.