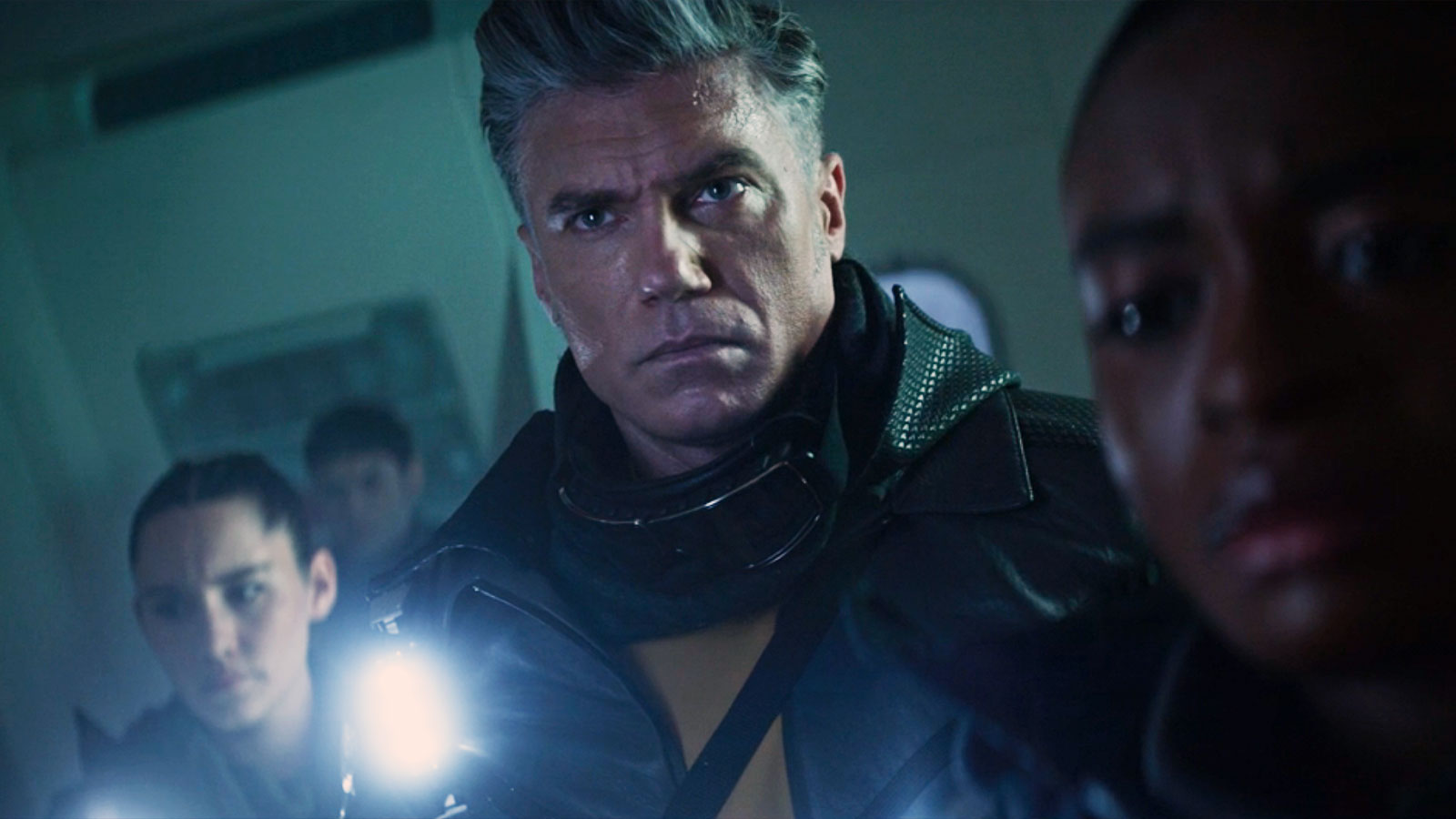 The penultimate episode of Star Trek: Strange New Worlds’ first season presents a sci-fi horror tale featuring this show’s favorite baddies, along with personal repercussions for various crew members that will surely ripple through this season and beyond.

The Enterprise is on an important delivery mission to Space Station K-7 when Captain Christopher Pike (Anson Mount) receives a priority alert explaining a Federation starship, the ­­­­­USS Peregrine, has crashed on the nearby Valeo Beta V. As the Enterprise is the only ship within response range, Pike decides to take an away team with most of our main characters to the Peregrine to help the crew, while the Enterprise continues to K-7.

Arriving at the crash site, the away team determines the ship’s crew found three refugees and decided to help them, but not before Gorn eggs implanted in one of the refugees hatched and wreaked absolute destruction and carnage. La’an Noonien-Singh (Christina Chong), given her history with the Gorn, is the away team’s go-to expert on fighting them, but there’s not much that can prepare the team to deal with what ultimately happens during their time on the ­­­­­USS Peregrine: Gorn babies hatch from within one of the refugees, an alien named Buckley (Carlos Albornoz), and starts hunting the Enterprise away team.

One can’t help but immediately think of Alien, as that classic sci-fi horror film memorably featured the titular alien hatch from within one of that movie’s characters. The Gorn do the same thing, and even after hearing from La’an earlier in the season about how ruthless and downright hellish Gorn breeding planets can be, seeing one of these monsters hatch from poor Buckley is brutal. Watching this happen in “All Those Who Wander” brings us to two major points we want to make about this episode.

The first is that the Gorn are portrayed in this show generally, and this episode specifically, as an awesomely horrible apex hunter, a far more violent and animalistic entity than seen elsewhere in the franchise. Indeed, seeing how violent and single-minded the Gorn are making the species’ appearance in The Original Series even more laughable than it already is. Just think about it: from the second they are born, the Gorn compete for dominance, violently ripping apart other hatchlings to prove which one is the alpha. This is after bursting out of somebody. How devilish! In the years to come, we’re sure the Gorn will be among the best-portrayed villains that Star Trek has to offer.

The second point this episode drives home is just how versatile Strange New Worlds’ tone can be. The nine episodes of the season thus far run the gamut from an existential crisis, scathing real-world commentary, rom-com-esque shenanigans, heartful character-centric moments, and fairytale exercises of the imagination. It’s an amazing buffet of storytelling, and we can’t think of another Star Trek show that has done such variety so well in so little time. With “All Those Who Wander,” Strange New Worlds proves it can do horror. Is there anything this show’s cast and crew can’t do?

Anyway, it’s up to the away team to fight the Gorn younglings and to save the remaining refugee, a young girl, Oriana (Emma Ho) who is clearly scarred by her experience. Noonien-Singh, understandably, relates to the girl, which makes the fight within the Peregrine’s halls even more personal for the security officer. When all is said and done, the events of this episode, along with some helpful guidance from Doctor M’Benga, cause Noonien-Singh to continue helping Oriana find any family she might have, even though this quest takes her away from the Enterprise. This is but one notable personnel result that happens because of this episode.

To contain the last Gorn hatchling, the crew devise a plan to lure the Gorn into the ship’s shuttle bay, where they can then flash-freeze it. They accomplish this by Noonien-Singh and Hemmer (Bruce Horak) escaping into cargo pods while the Gorn violently tries to eat them. The plan is successful, and in a bit of much-deserved personal fury, Noonien-Singh smashes the frozen lizard to end the threat.

Not all is fine, though, as Hemmer, who suffered being sprayed by the Gorn earlier in the episode, realizes the spray was actually an impregnation agent, and he knows he is about to suffer the same fate as Buckley. It’s a heartbreaking revelation, and one at first assumes Doctor M’Benga or Nurse Chapel or somebody else will find a way to rescue Hemmer from certain death. But the only thing rescuing Hemmer from becoming a breeding ground for more Gorn is the engineer’s selfless choice to throw himself out of the ­­­­­USS Peregrine’s shuttle bay down to the planet far below.

Yes, we say goodbye to the Enterprise’s chief engineer, and we were surprised by how much his loss moved us. Hemmer wasn’t featured as prominently in the preceding eight episodes as others, but after his one-note introduction in “Children of the Comet, his budding friendship with Uhura (Celina Rose Gooding) (as showcased in “Memento Mori”), and the engineer’s prominence in “The Elysian Kingdom,” the Aenar had blossomed into a multi-dimensional personality who bore much potential.

It’s a shame we won’t see more of him (assuming he actually stays dead… you never know in science-fiction), but his parting words to Uhura end up being a major catalyst for her. Indeed, this episode asserts Hemmer is largely responsible for Uhura becoming the communications officer we know and love, and that’s certainly enough for us to hold the dearly-departed character in high regard despite his short tenure.

This episode actually begins with Uhura wondering what her future is like, a recurring theme for not only this character but others in this show. The young cadet is at a crossroads in her life and doesn’t quite know what to do, but as Hemmer stated in “Memento Mori,” his purpose in life is to fix things. It turns out Uhura is someone who needed fixing, and the Aenar’s wise parting words to Uhura sealed the deal: she wants to remain in Starfleet and will make a home for herself on the Enterprise. The episode’s last seconds show Uhura confidently strolling on the bridge of her ship, and in a sweet auditory touch, we hear what appears to be sound effects from her station from The Original Series.

“I know better than to beat a dead horse. But you’ve made an impact here. There will always be a place on Enterprise for Nyota Uhura.”

– Pike to Uhura, addressing Uhura’s qualms about staying in Starfleet.

So, we’ve noted how Uhura’s destiny is changed, how Noonien-Singh’s mission to help Oriana will take her away from Enterprise, and how we’ve said goodbye to Hemmer. That’s a lot of consequence, but there’s another crew member who is dealing with the aftereffects of “All Those Who Wander.” Spock, who watched a member of the away team be horrifically carried away to his death by the Gorn, and then later felt the chief engineer’s loss keenly, loses control of his ability to contain his emotions. Despite asserting to Nurse Chapel (Jess Bush) earlier in the episode how controlled Vulcan emotions are, Spock, displays anger in a way we haven’t seen before, and even with the calming presence of his friend, there doesn’t seem to be much the Vulcan can do to regain full control. How Spock’s anger manifests with the crew and his duties remains to be seen, but this situation is clearly more complex, and needs to be played over multiple episodes.

Taken together, “All Those Who Wander” turns out to be a hugely consequential episode, one that showcases Strange New Worlds’ ability to churn out solid sci-fi horror while not forgetting how personal this show can be. Because of its impact on various characters, we wouldn’t be surprised if this episode could serve as a decent season finale, but that just makes us more excited for what the actual season finale is going to hold.