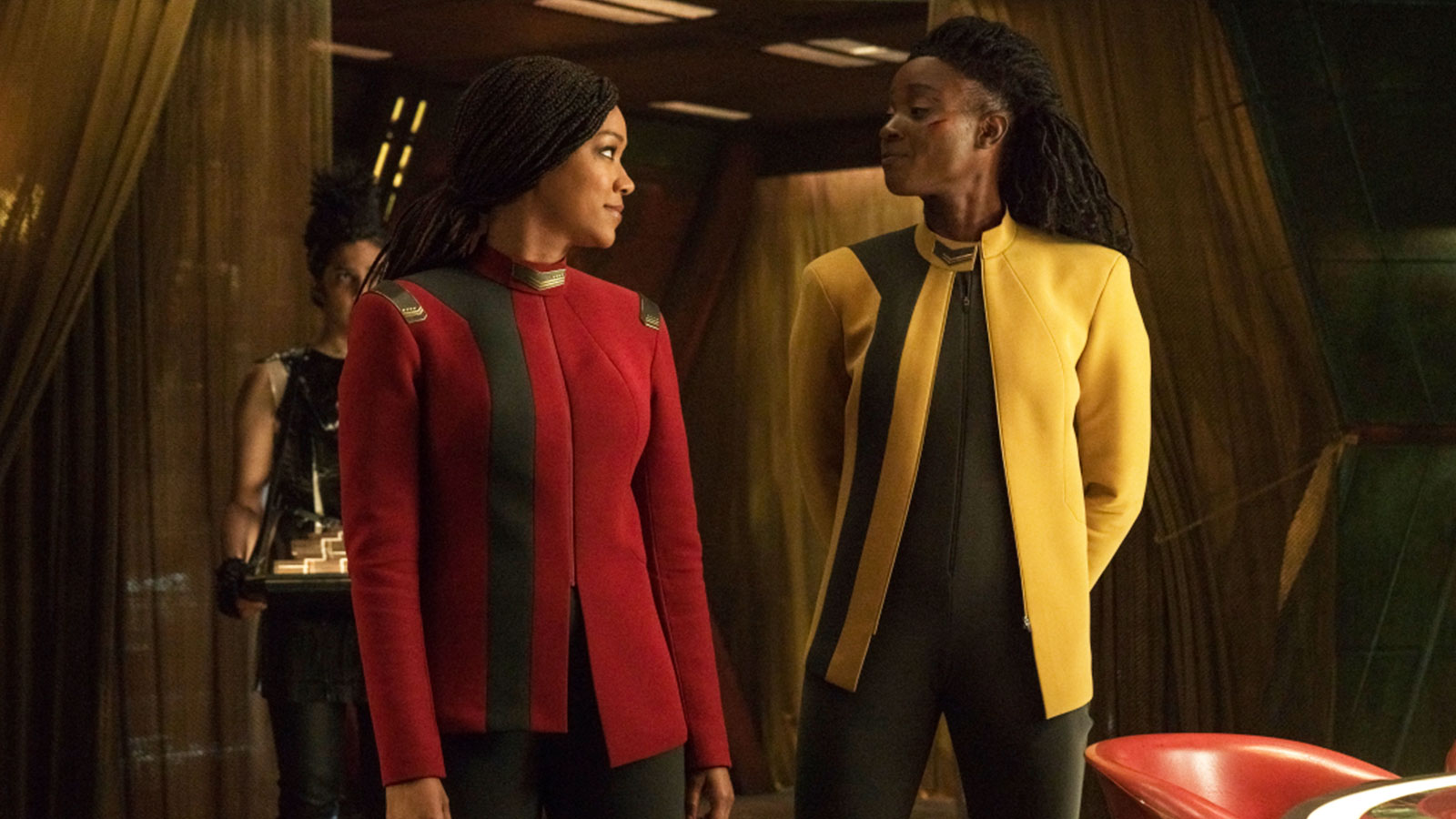 It’s all fun and games in Star Trek: Discovery‘s season four mid-season premiere as Michael Burnham tries to track down the rogue Cleveland Booker before he accidentally sets off a disastrous chain of events with the makers of the Dark Matter Anomaly.

In the mid-season finale, Cleveland Booker (David Ajala) and his newfound ally, Ruon Tarka (Shawn Doyle), take matters into their own hands as the Federation and its allies fail to take immediate, decisive action against the Dark Matter Anomaly. After stealing the prototype next-generation Spore Drive, Book and Tarka aim to strike at the source powering the DMA, which will hopefully eliminate the DMA as a threat, but this course of action threatens a powerful response from the makers of the DMA, whoever they may be.

After a dressing down by Federation President Laira Rillak (Chelah Horsdal) for not predicting Book’s rogue plan, “All In” starts with Captain Michael Burnham (Sonequa Martin-Green) tasked with learning more about the area of space in which the mysterious Unknown Species 10-C resides. To do that, she needs star charts made by a mysterious species that lives relatively close to the Galactic Barrier and Species 10-C’s location. These star charts are not generally available, except if one knows where to look. Admiral Charles Vance (Oded Fehr), meanwhile, takes a page from Rillak’s book and discreetly directs Burnham to also find a solution to Book’s rogue status, something she was initially directed not to do by the president because she is too close to Book.

Yes, you’ll probably get deja vu during Vance’s conversation with Burnham, as political jockeying was indeed an element of the Ni’Var talks in “All is Possible.” If you ask us, it’s clear the show’s writers are aiming for a recurring theme in this season: politics playing a role in disaster response. What is Star Trek if not a mirror to reality, right?

Burnham determines she is able to kill two birds with one stone, as she knows where Book is heading and where she can obtain the needed star charts: a gambling den on the planet Porathia run by Haz Mazaro (Daniel Kash), a broker Burnham and Book visited during their year together being couriers. Burnham guesses correctly that Book is heading there to obtain isolynium, a material he and Tarka need for their plan to work, and she heads there with Joann Owosekun (Oyin Oladejo), but Book arrives at Porathia first and tries to earn the isolynium by weeding out cheaters in the den.

You’d be forgiven for wondering why Owo, among all the crew Burnham could have taken with her, is joining the captain on this mission. Well, it turns out Owo’s poorly timed but heartfelt emission to Saru (Doug Jones) in “Stormy Weather” about feeling helpless wasn’t a one-off character beat. Burnham recognizes Owo has a difficult time sitting around waiting for things to happen, and the captain determines bringing her along will help her anxiety about the DMA. Luckily for Burnham, Owo ends up being the ticket to keeping Book from obtaining the isolynium.

Burnham needs latinum, and lots of it, to prevent Haz from giving Book the isolynium. To earn that latinum, she and Owo use the navigator’s prowess in the fighting ring to hustle betters and make it seem like Owo is no match for the more seasoned fighters in the den. Ultimately, Owo pulls out a decisive win and banks plenty of latinum for the isolynium, but not before Book is able to claim he and Tarka completed their task for Haz by catching cheaters (in this case, it was just one cheater, a Changeling, who was the source of all this suspicion). Considering both parties completed their objectives at the same time, how should Haz choose who gets the isolynium? A tense game of Leonian poker, of course.

Burnham knows Book is a master at this game and makes no serious effort to win. She does have a trick up her sleeve, however, as she insists on inspecting the isolynium first, and secretly plants a tracker – the same kind of tracker the Federation used to track the missing dilithium shipments in “Choose to Live” — on it so that even if Book takes off with it, she can still track his location. The end of the game is more impactful, however, than Book just winning the isolynium for his own purposes.

Burnham asserts, reluctantly, that Book’s actions have seriously put him at odds with her, and that if he were to continue with Tarka’s plan, their relationship would be over. Book still continues with his plan after he wins the poker game, which speaks to how much faith he has put into what he and Tarka are trying to do. To have his grief-driven actions trump his feelings for Burnham is a remarkable moment for the character, and drives home just how strongly he was (and still is) impacted by his homeworld’s destruction.

Book isn’t the only one whose actions are driven by loss. As Tarka explained briefly in “…But To Connect,” he wants the DMA’s power source so he can return to his friend – some mysterious, unnamed individual – in another universe. Owo determines as such just by analyzing Tarka’s actions thus far, and his reaction to such an analysis indicates there is much more to his story than he has shared.

“There are varying degrees of loss, Lieutenant Commander Owosekun. And if you could feel the weight of mine, if only for a fleeting moment, you’d reconsider how much choice one has with regards to what comes out of it.”Tarka to Owosekun

We’re lucky that Discovery is placing guest star Shawn Doyle in such a prominent role in this half of the season. Doyle is proving to be an excellent addition to the cast, and balances smug intelligence with subtle, heartfelt emotionality. This makes his character one you both like and dislike, no small feat.

Rounding out this episode is a scene between Paul Stamets (Anthony Rapp) and Doctor Hugh Culber (Wilson Cruz), where Culber is feeling guilty and responsible for Book’s actions. As the ship’s de facto counselor, Culber believes he could have done more to help Book deal with his grief, and that his failure to do so is proof that Doctor Kovich (David Cronenberg) was right in the older doctor’s assessment that Culber was spreading himself too thin. Stamets invites his partner for a relaxing stroll on the holodeck… and that’s the extent to which Culber’s struggle is played out in this episode.

For our money, having the counselor in need of support will be a recurring arc in this season that will likely lead to something bigger and more impactful down the line. In any case, we have to praise again this show’s portrayal of gay relationships. Stamets, normally the grumpy, prickly engineer, is nothing but a loving, supportive, and caring partner when Culber is struggling. Moreover, Culber is completely receptive to his partner’s suggestion and appreciates the support. Bravo, Discovery.

Lastly, the star charts Burnham retrieves from Haz help the Discovery crew determine that the DMA is more than just a seemingly random anomaly let loose by some unknown species on the unsuspecting galaxy; it’s actually a mining device that sucks up all boronite in a given part of space. That material, the crew reason, is used to power a massive field of space found where Species 10-C resides. This field, as Vance theorizes, could hold a star and a couple of planets. This makes the idea of Book and Tarka destroying the DMA even more impactful, as such an action will most definitely lead to an aggressive rebuttal from Unknown Species 10-C.

Taken together, “All In” is an aptly named episode that shows us just how invested Book is in his and Tarka’s mission, how to hurt Burnham is by Book’s actions, and how much of a threat the two men are posing against the DMA. We have to give this show credit for weaving an intergalactic dilemma and an interpersonal dilemma together so adroitly and making us care about each problem equally. Burnham and Book are at seemingly irreconcilable odds thanks to each person’s take on how to handle the DMA. We’ve noted before that the DMA is a well-written stand-in for COVID-19, and to have two people who care much for each other brought to the breaking point because of this phenomenon is, once again, one-way Discovery is a mirror for our social struggles. Now, the question is: will the two settle their differences, and will something happens that prompts a confrontation between the Federation and Unknown Species 10-C?