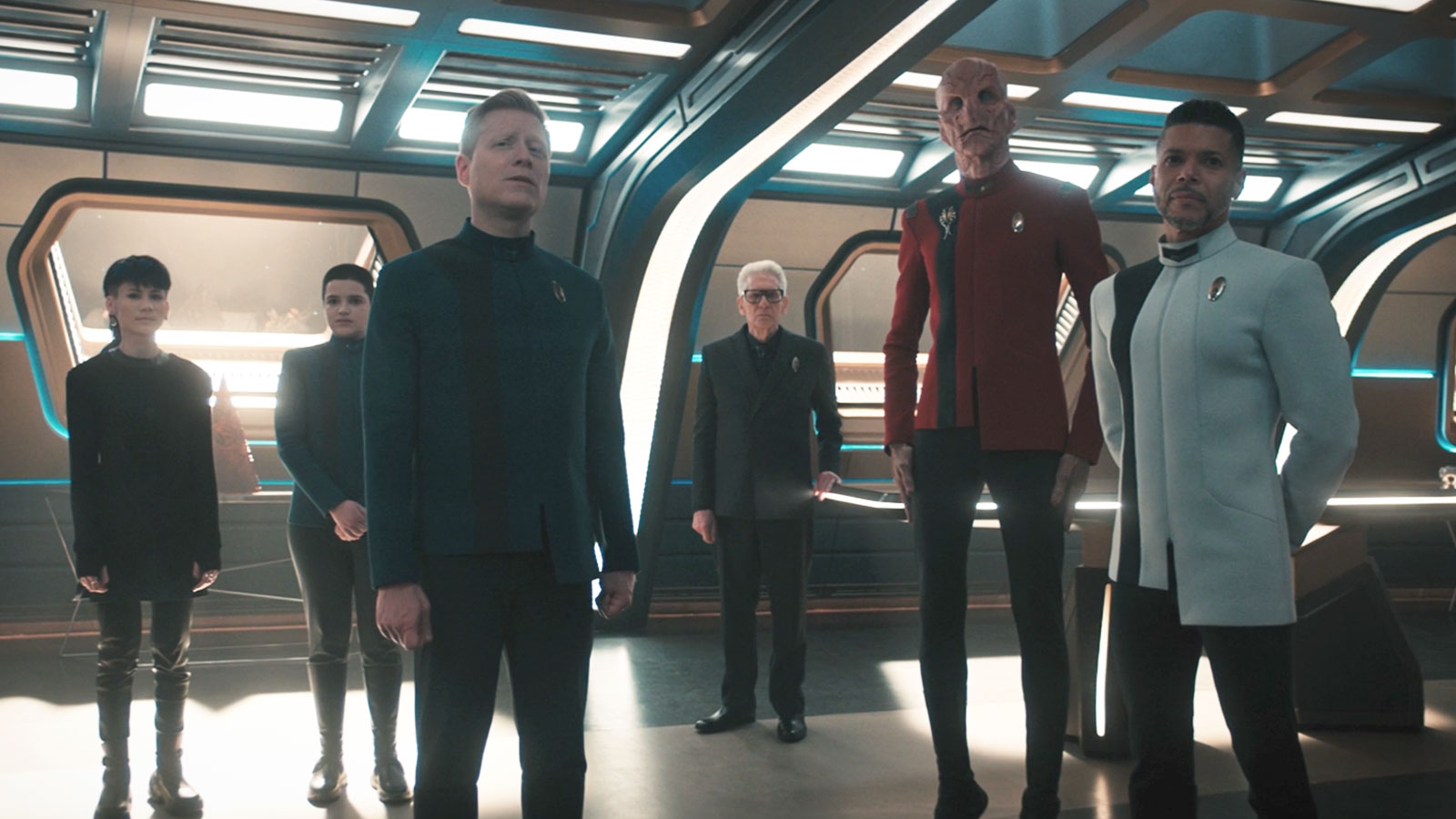 Trust is the name of the game in Discovery‘s mid-season finale as the galaxy decides what to do about the Dark Matter Anomaly, while the Discovery crew uncover a new lifeform within their ranks and must decide what to do about it.

After determining the coordinates for the species that built the DMA thanks to her Sphere data, Zora (Annabelle Wallis) actually refuses to tell the Discovery crew, as she thinks it would lead them to certain danger. Remember, Zora considers the crew her family, as she illustrated to Michael Burnham (Sonequa Martin-Green) via a holographic family tree in the last episode. Clearly, having a computer that can refuse an order is a problem, so Doctor Kovich (David Cronenberg) comes aboard the ship to figure out what to do.

How could the Discovery crew trust Zora to operate with their interests in mind, and not be driven totally by emotion? That’s the question Paul Stamets (Anthony Rapp) struggles with, and it’s an understandable struggle; Stamets all-too-well remembers Control, the last sentient computer he and his crew faced off against, and he’s wary of having Zora compromised with emotion and self-interest. Zora understands Stamets’ concerns, and offers a solution: a kill-switch that the Discovery crew could use should Zora prove to be a detriment during a mission. Offering such a safeguard does alleviate some of Stamets’ concerns, but others, such as the always-emotionally intelligent Doctor Hugh Culber (Wilson Cruz), don’t like the idea of having the crew have that kind of power over a sentient entity.

It’s during this debate that the crew realizes just how evolved Zora is. While digging through her various computer nodes, Adira Tal (Blu del Barrio) and Stamets find what is essentially Zora’s subconscious – a dream center that places imagery of her most deeply held cares. Unsurprisingly, it’s the ship’s crew that she holds so dearly, to the point where she regularly “dreams” about them. It’s a touching revelation and helps illustrate to Stamets that Zora may very well have the ship’s interests at heart. But more than that, this revelation illustrates a far more profound discovery: Zora is a new type of lifeform, one that began as artificial intelligence but has become something so much more. The question is: now what?

To help codify Zora’s operation aboard Discovery, Stamets offers a solution to Kovich and Saru (Doug Jones) that addresses his misgivings about the computer: make her a formal member of Starfleet. By joining that organization, Zora would be bound by the same rules that govern Starfleet officers, including disciplinary procedures. If she acts out, refuses an order, makes an emotionally driven mistake, or does anything else unbecoming of a Starfleet officer, there would be ways to address that.

For our money, making Zora a part of Discovery‘s crew is an excellent idea and furthers one of this show’s major themes: making all lifeforms recognized and “seen.” To its enormous credit, this show contains so much representation already; why not add a recently sentient, disembodied, artificial intelligence? How Zora will integrate with Discovery‘s crew more than she already is will be one of the most interesting aspects of the second half of this season; it’s a shame we’ll have to wait until February to see more.

Another reason why the mid-season break will be especially excruciating is because of what happens in this episode’s other plotline. Representatives from all across the galaxy come to Federation Headquarters to decide what to do about the DMA and Unknown Species 10-C. Two options are ultimately presented: a fast strike at the heart of the anomaly, or a diplomatic attempt at first contact. The former option is presented by Ruon Tarka (Shawn Doyle), as the scientist has created a bomb that can be placed at the center of the DMA by Discovery. The resulting explosion would destroy the DMA, but, as Burnham points out, possibly damage not only subspace around where the bomb is launched, but whatever or whoever is on the other side of the wormhole at the heart of the anomaly. Tarka and Cleveland Booker (David Ajala) think it’s a necessary risk, as the DMA is still running rampant within the Milky Way. Burnham, meanwhile, challenges such a strategy, saying that first strikes don’t adhere to Federation ideals and that the assembly shouldn’t assign aggression to the DMA’s actions considering no one knows anything about the species behind it.

Tarka has a method to his madness. Instead of just wanting the DMA destroyed like everyone else, he has a deeper motive: getting the power source that powers the DMA so he can use it to cross universes. As he explains to Book, Tarka was once imprisoned by Osyraa with a fellow scientist, and the two prisoners had a plan to venture together to a peaceful, alternate universe. That plan went awry when Tarka escaped and his friend did not, and now Tarka is determined to meet his friend in this other universe. It’s an unexpectedly touching story from Tarka, and Doyle adroitly dances on the line between sincerity and suspicion. We get the feeling there is something he is still hiding from Book; Tarka never did mention the name of his scientist friend. It’s another mystery that’ll have to wait.

The other option laid out for the assembly is a well-intentioned first contact effort since Zora discovered the location of Unknown Species 10-C. Supporters of this option include the ever-moral Burnham, President Laira Rillak (Chelah Horsdal), and President T’Rina (Tara Rosling) of Ni’Var. The lines are drawn as the assembly votes on which option they want to pursue, and much to Book and Tarka’s chagrin, the peaceful option wins. That doesn’t stop the two men, though, as the end of the episode shows them using the next-generation Spore Drive, mentioned briefly by Burnham in “The Examples,” to use Book’s ship to jump away and enact their own plan against the DMA.

For the whole season thus far, Book has been haunted by the DMA; he’s been upset at the inaction the Federation is opting for, as his experience with the hallucination of his father in “Stormy Weather” illustrated. Teaming with Tarka is the natural endgame of his grief-driven angst, and we know he is super-serious about taking matters into his own hands when he leaves Grudge behind with Burnham, something we never thought he would do. Unfortunately, seeing how Tarka and Book’s plan plays out will have to wait until February.

Our one major critique about this episode lies with how director Lee Rose opted to intertwine the two trust-themed plots near the end of the episode. Rose cuts between Stamets’ monologue to Zora about trust and Burnham’s monologue about trust to the political assembly. The intention is clear – trust can take many forms, and it has to be reciprocated – but we think viewers might get lost as they watch the two heavy-handed monologues play out. Giving each speech room to breathe might have been the more accessible option.

Taken together, “…But To Connect” leaves its audience with two fascinating moral questions: Should Zora be excised from Discovery thanks to her newfound sentience and the dangerous implications that present, and should the Federation strike against the DMA while they can and forgo first contact efforts? This episode takes its time to lay out arguments for both situations, and no matter which side you land on, the wait until February will be a long one. Consider this about Zora’s situation: we’ve known about her since 2018, and because she has had such careful, measured character development in the years since, the question of her continued existence weighs more heavily than if she were, say, a computer introduced only over one or two episodes. Her slow-burn storyline has been fantastic, and we’re seemingly marching toward the conclusion of a mystery that began in “Calypso.”

Confronting the audience with thought-provoking questions like these is Star Trek‘s bread and butter, and kudos to Discovery for leading us to these questions over multiple episodes. February can’t come soon enough.

Get 2 months of Paramount+ for free

Paramount Plus is offering a 2-month Paramount+ Premium trial subscription plan for free for new or returning customers. To redeem, visit paramnountplus.com and enter the coupon code TEENWOLF.

Please note that you will be billed at the current rate of $9.99/month after your trial period expires and you may cancel at any time.