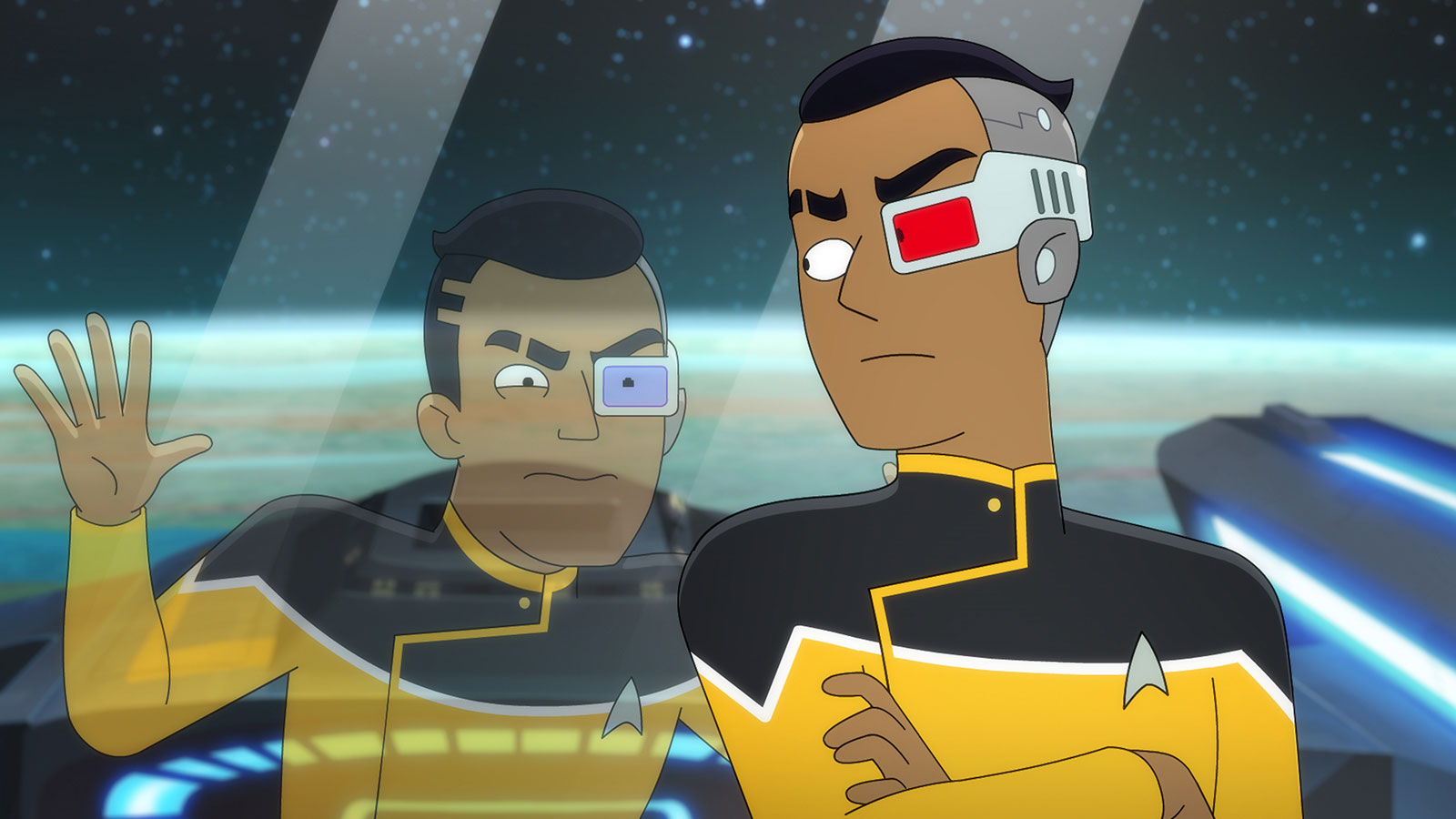 This week turns a long-overdue spotlight on Rutherford, as the ensign plumbs the depths of his mind to save himself, and in the process uncovers more about the intriguing mystery surrounding his implant.

This episode’s A-plot revolves around Ensign Sam Rutherford (Eugene Cordero) as the engineer’s implant glitches out in a major way after the ensign started having repeated nightmares about him trying to control an overheating engine. The implant’s malfunction leaves him in a coma and fighting for his life. But that fight isn’t what you expect, as our lovable hero is actually fighting a 10-year-younger version of himself, a Rutherford who was aggressive, hard-edged, and more intense than the person Rutherford is now. Through a fascinating bit of character exploration, we learn that Rutherford used to be someone wildly different and that he has always thought his implant installation was a way to lose the kind of person he was in his younger days.

With Rutherford in a coma and him fighting his younger self in the depths of his mind, the two Rutherfords need a way to assert dominance over the other. So, because our ensign used to build racers in his Starfleet Academy days, the two Rutherfords challenge themselves to a race using whatever vehicle their minds can conjure. While the younger Rutherford opts for a totally bespoke one-person racer, the older Rutherford decides to recreate the Delta Flyer, as seen in Star Trek: Voyager, as his racing vehicle of choice. Tom Paris would certainly be proud! The two take off in a race near the Neutral Zone, but it turns out space debris isn’t the only danger the two encounter during the contest.

Thanks to a surprise attack by a Romulan warbird, the younger Rutherford nearly gets destroyed, and it’s only thanks to the older Rutherford, with his imaginary friends onboard the Delta Flyer lending a hand, that the other engineer is rescued. Clearly, Old Rutherford wins the day, but in a moment of clarity, Young Rutherford imparts a newly revealed memory about his implant installation: it seems the surgery, completed after Rutherford was injured by an exploded engine he was working on for a shadowy group of scientists, was a cover-up for something else, though what this cover-up could be is anyone’s guess.

So, with Ensign Rutherford back in the land of the living, he has a mystery on his hands. Who installed his implant, and why were memories implanted in his mind that made him always think it was an elective surgery? This is an intriguing mystery that we first caught a glimpse of in the second season finale, and we’re excited Lower Decks returned to this dangling plot thread in such a major way. Of the four main ensigns in this show, we feel Rutherford is often the short-changed one, but that certainly wasn’t the case this week.

“I was always so angry at everything, but you… all that rage is gone.”

“Can’t we merge and be both of us, all our memories combined?”

“No, then we’d both be gone. Sometimes it’s better to grow.”

This episode casts light on Rutherford in a way no other characters can claim; we know what Rutherford was like in the days before Lower Decks, and getting insight into his younger self is fascinating. Receiving the implant completely changed his personality, and only a flicker of his old self remained in his subconscious.  Eugene Cordero does a great job switching between the two characters, and it’s to the actor’s credit that we could totally tell the difference between the two Rutherfords even without visual cues.

Of course, things were happening with our other heroes. Ensign Beckett Mariner (Tawney Newsome) and Brad Boimler (Jack Quaid) are tasked with manning a Starfleet recruitment booth on Tulgana IV (a planet the Cerritos visited way back in “Envoys”). Things don’t go well for the two ensigns, however, as Starfleet appears to have a poor reputation among those at the recruitment drive, including from the ensigns’ neighbor, a Vash-esque archaeologist named Petra Aberdeen (Georgia King). She, as well as others who pass by the Starfleet booth, constantly disrespect the ensigns and their jobs, to the point where Boimler completely cracks and goes on a hilarious screaming rampage.

Even though Petra asserted not all space archaeologists were thieves, as Mariner suggested, Petra does indeed use the distraction Boimler makes to steal an artifact from a nearby museum.  At the end of the episode, Mariner receives a call from Petra, who offers Mariner a job should the ensign ever tire of Starfleet life. Mariner, for her part, seems (reluctantly) interested enough to save Petra’s contact information, so we’d put money on seeing Petra again soon.

All in all, “Reflections” is most memorable for marking a major milestone for Rutherford, who is slowly unraveling the mystery of his implant. Kudos to show creator Mike McMahan (who also wrote this episode) for planting the seeds of this mystery earlier in the series, and who doesn’t seem to want to rush into solving it. It’s this drawn-out mystery that makes this episode so intriguing and enjoyable to watch. Otherwise, we bet this episode will ultimately mark a turning point for Mariner since she has been given an “out” from Starfleet should she want it; we’ll be watching to see what she does with her new contact.