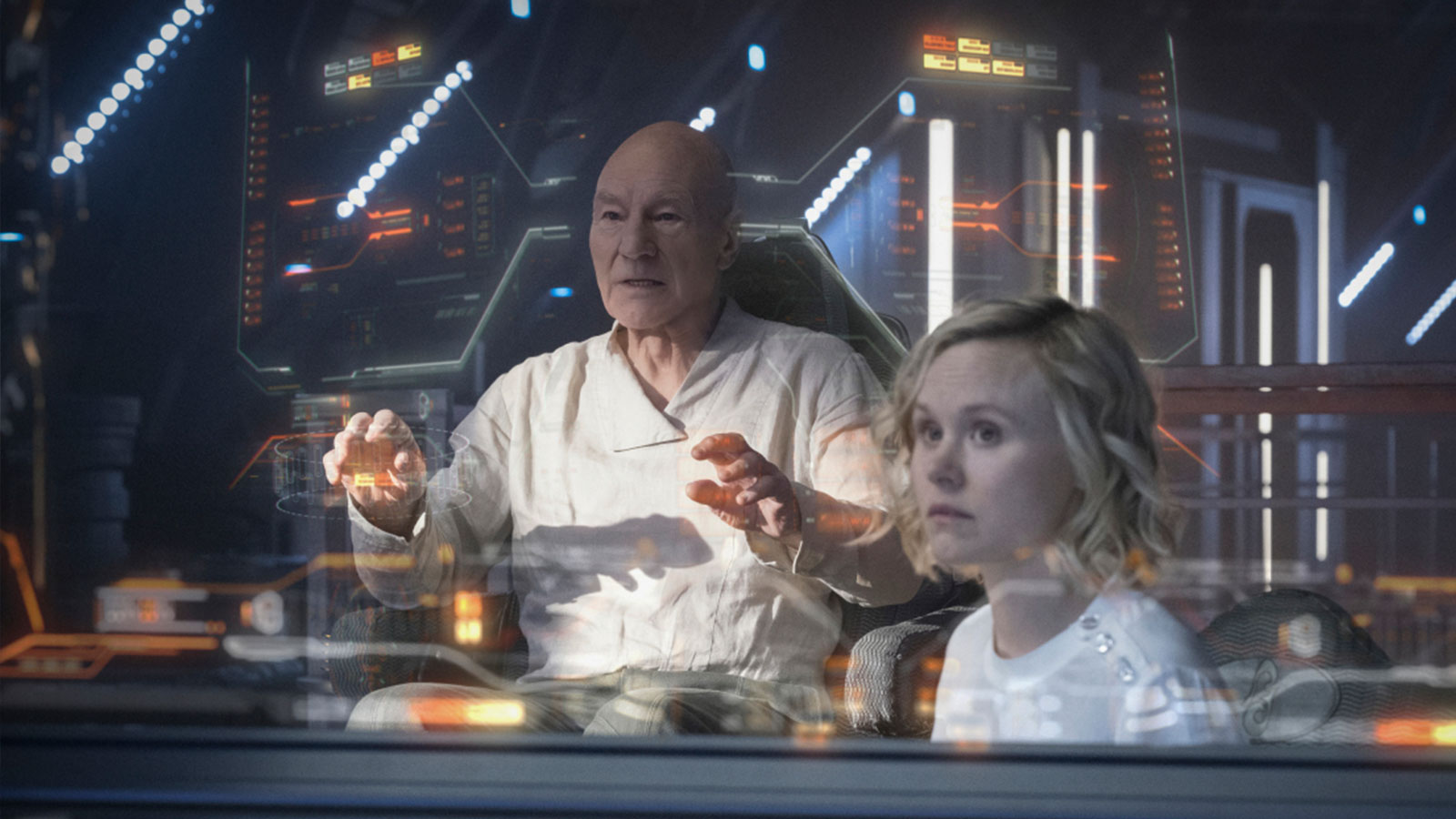 Star Trek: Picard comes full circle in the season finale “Et in Acadia Ego, Part 2,” as Picard, his crew, the Romulans, the synths, and a few other folks reach the climax (or beginning?) of the retired admiral’s journey. It’s a wonderful episode with many standout scenes that will have fans on the edge of their seats, but it also conveys some deeply emotional moments that fans likely aren’t expecting. This doesn’t mean there aren’t certain major and minor critiques worth discussing, but these don’t stop the finale from ably capping off a thoroughly impressive season.

Note: While this review won’t recount the episode in its entirety, it will discuss certain key scenes. Spoiler warning from here on out! 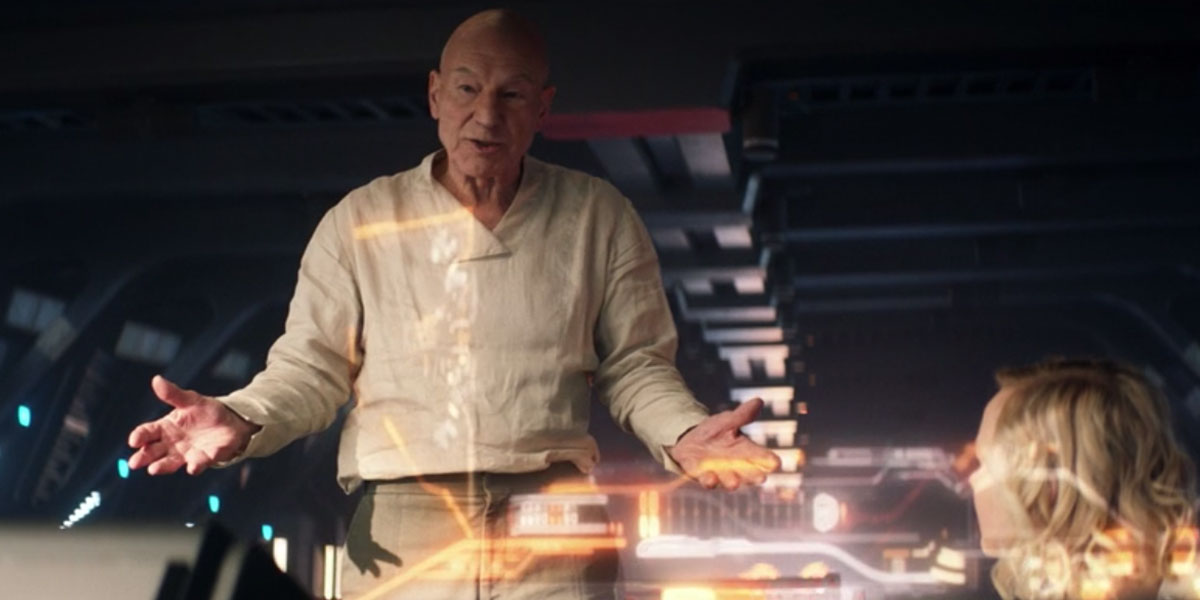 As much as Picard has always been about the titular character, you could argue Data is almost an equally major part of this show, despite only seeing the android for a few key scenes. This episode particularly is as much about Picard and Data’s relationship as anything else, and it’s in this relationship that “Et in Acadia Ego, Part 2” showcases some truly impactful moments in the decades-long arc of these characters.

What may very well prove to be one of the best scenes of this season comes via a one-on-one conversation between Picard and his former crewmate, as Picard (Patrick Stewart) faces the prospect of being dead after succumbing to his brain abnormality. Sitting in a dark room that as much portrays purgatory as it does actually represent the mind transfer process Picard is undergoing, the two old friends talk about why humans shouldn’t be immortal, and how an outsider such as Data (Brent Spiner) views the key qualities of being human, such as friendship, love, and peace. These qualities are what make life worth living, and they put value in an existence that is finite. It’s a lesson Data learned during his time studying humanity, and it’s why now, sitting with Picard, Data asks him to finally put the remnants of his consciousness to rest. He wants to die, as that is the ultimate human experience. This scene is incredibly touching, especially for long-time fans, and few probably predicted that this is how, in part, this season would end. It’s perfectly appropriate, as we saw in the season premiere how Picard is still struggling with Data’s death. By helping Data finally “die,” Picard’s journey since Nemesis comes full circle, as does Data’s journey since “Encounter at Fairpoint.” 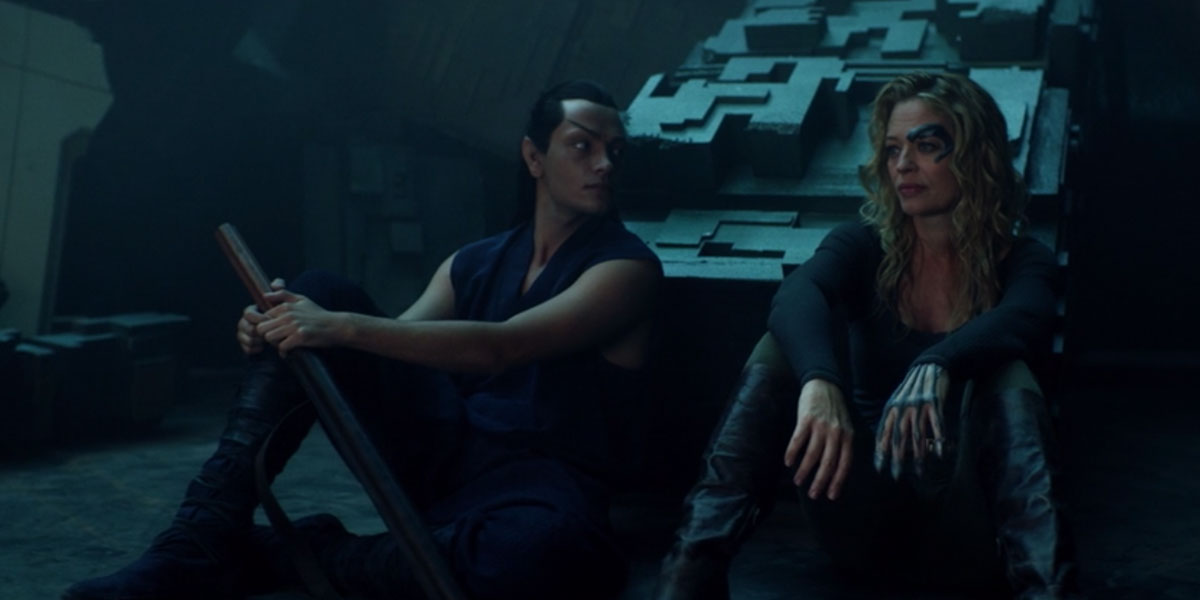 Evan Evagora as Elnor and Jeri Ryan as Seven of Nine

On this note, Data’s death scene is truly memorable. While we claimed previously that the shot of present day Picard and his younger self as Locutus in “The Impossible Box” took the crown as best shot of the season, this crown has been replaced. As we see Data, lying down on a couch in his version of purgatory,  quickly age as Picard, in real life, unplugs Data’s conscious, Data is visited by his former captain, classic red shirt and all. As we only see mostly just a shadow of this younger Picard, and as Data finally closes his eyes, the two characters ultimately dissolve into a beautiful starfield with “Blue Skies” playing as the perfect soundtrack. This transition is brilliant. It will bring a tear to the eye of any Star Trek fan, and huge praise goes to director Akiva Goldsman for crafting a scene that joins the long list of classic Star Trek moments. 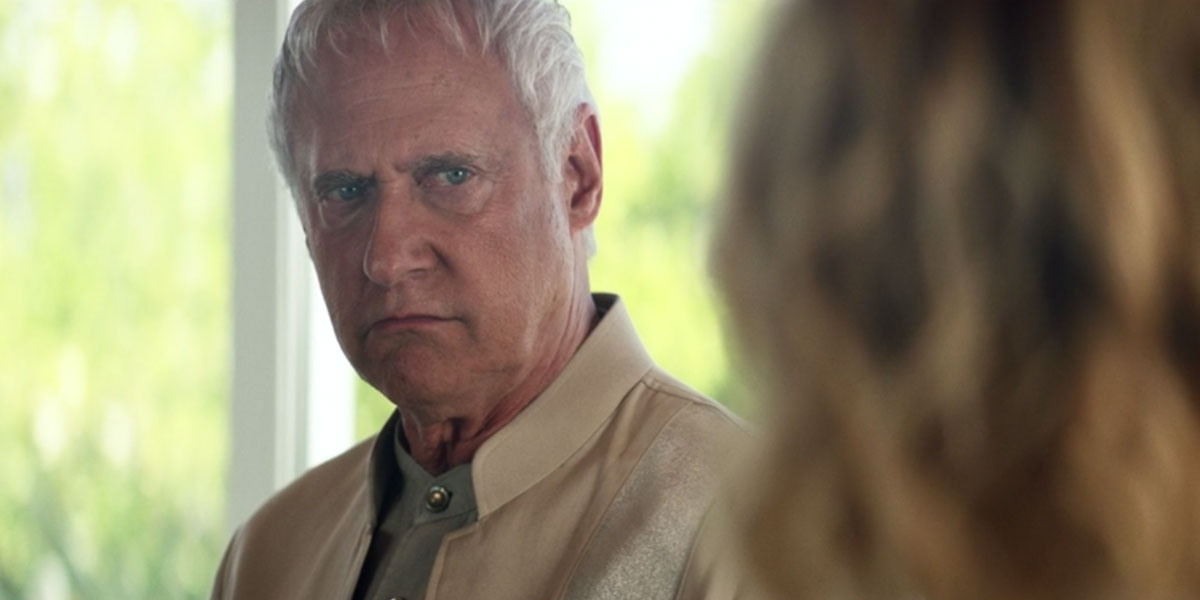 Of course, other things happened in this episode besides the conclusion of Picard and Data’s journey. In true season finale fashion, a huge battle breaks out over Coppelius as Picard and the Orchids try to delay the Romulans from destroying the android colony. In this battle, we finally get to see Picard command from the captain’s chair again, even if he struggles to control La Sirena during this CGI-fest. The production team certainly went all out for this scene, as the sight of the Orchids trying to fight off the massive Romulan fleet is as exciting as you would expect. 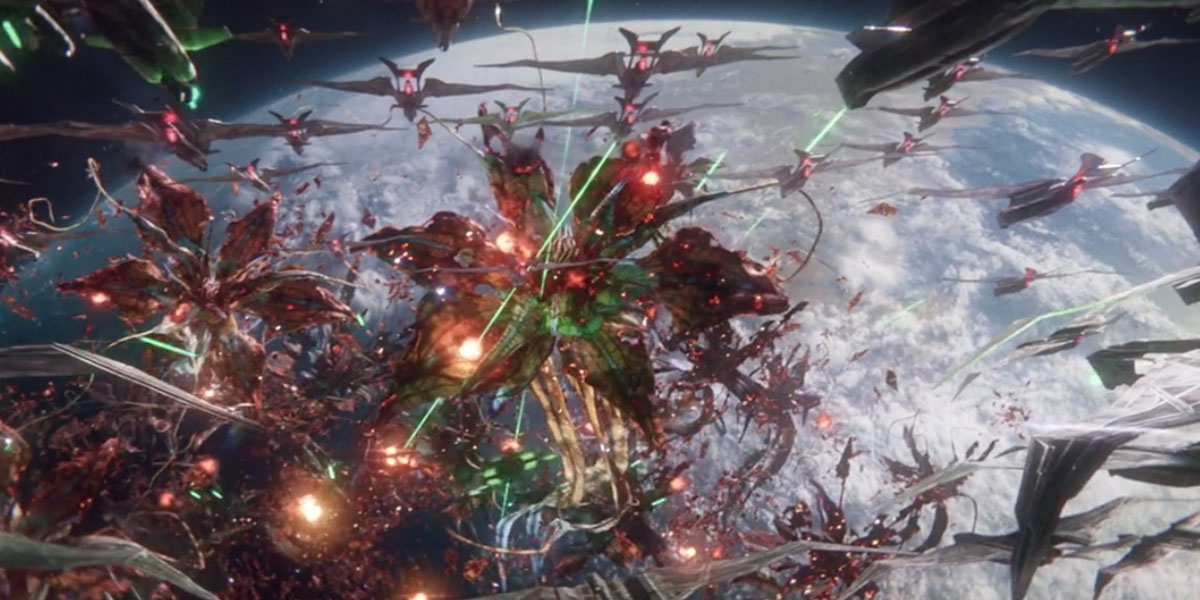 Not surprisingly, though, a handful of flowers can’t fight off the Romulans, but luckily someone shows up to save the day: William Riker (Jonathan Frakes)! As foreshadowed in “Nepenthe” when Riker claimed it would take an extraordinary reason for him to come out of the reserves, Riker indeed has come to Picard’s aid. Captaining the USS Zhang He with dozens and dozens of other Federation vessels behind him, Riker stares down the Romulans after it becomes clear that they were not going to accomplish their objective of destroying the colony. Seeing Frakes in uniform again in the command chair is awesome, of course, and not surprisingly he still commands the same gravitas we know and love. While his time in this episode is relatively short, Riker and Picard do exchange some heartfelt sentiments before Riker warps away again. 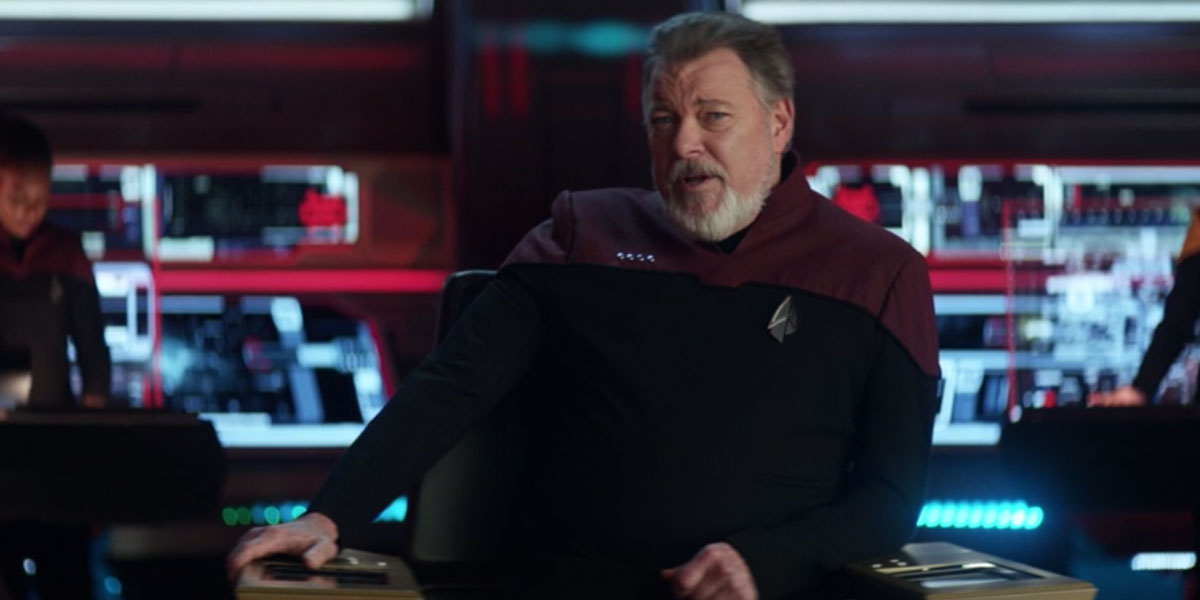 While there were many awesome moments in “Et in Acadia Ego, Part 2,” this episode also reveals further one of the season’s biggest flaws. Picard‘s writers have been too apt to utilize the cliche deus ex machina approach to impossible problems – like Elnor conveniently showing up in “The Impossible Box,” Picard and Soji (Isa Briones) using the powerful Borg transporter in the same episode, and Picard and Soji conveniently transporting directly in front of Riker and Trio’s daughter. Well, there may not be a more deus ex machina device in the history of deus ex machina devices as this episode’s use of the androids’ magical handheld imagination device. What kind of weird sci-fi is that? Just imagine what you want to happen and it happens? Rios (Santiago Cabrera) uses it to repair his disabled ship, and later Jurati (Alison Pill) uses it to produce a pseudo-fleet to delay the Romulans. How convenient. You kind of just have to roll your eyes and go with it. The same can be said of the way Picard is ultimately revitalized. How convenient that Altan was working on a mind transfer process, and that he is able to replicate Picard’s body perfectly? The ability for Alton or others to simply transfer someone’s consciousness into a new body opens up many doors that the show’s producers probably didn’t mean to open. 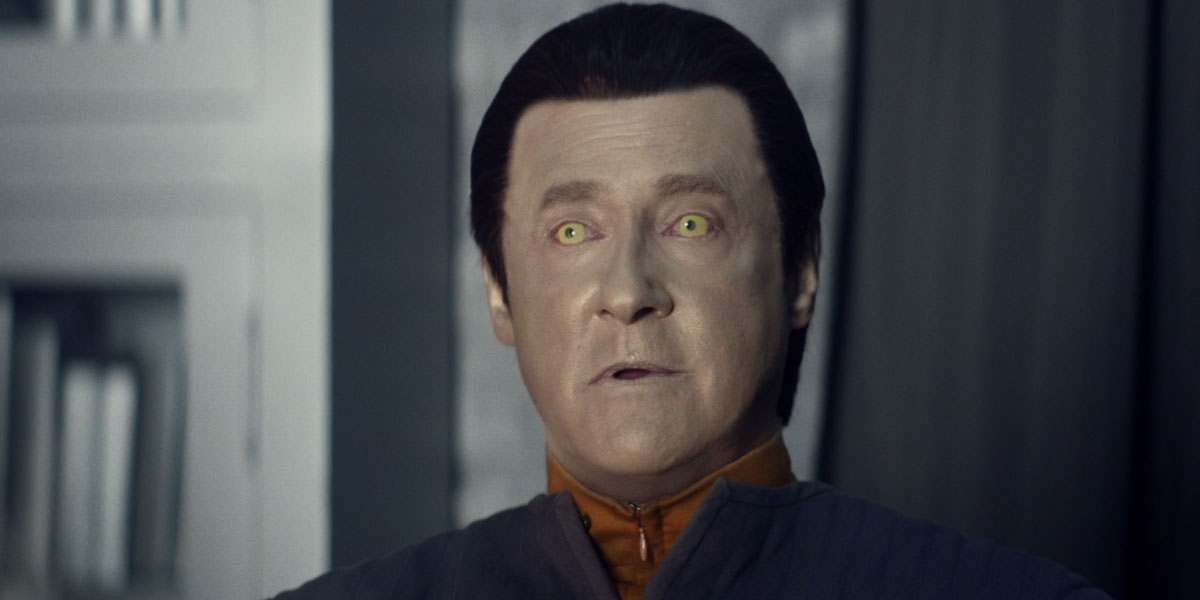 In any case, as we look back on season one of Picard, we’re left with a fantastic impression of the talent behind and in front of the camera. Patrick Stewart is better than ever, expertly adding weighty character development onto a character we thought had seen his journey’s end. Brent Spiner’s few scenes as Data prove to be essential to his character arc, and indeed, this episode joins the ranks of the best Data or Picard-centric episodes. Picard‘s newcomers, with the unfortunate exception of Evan Evagoria (whose lackluster performance we’ve previously opined was a combination of the actor and his character’s limited development), show that they can stand their ground against veteran acting talent and a complex, ever-evolving script. And speaking of the script, Michael Chabon, Akiva Goldsman, Heather Kadin, and the various involved directors and writers all proved that they could make a well-paced, novel-esque show that recaptures our love of old characters and grow our fondness for new ones. Bravo to this fantastic team. 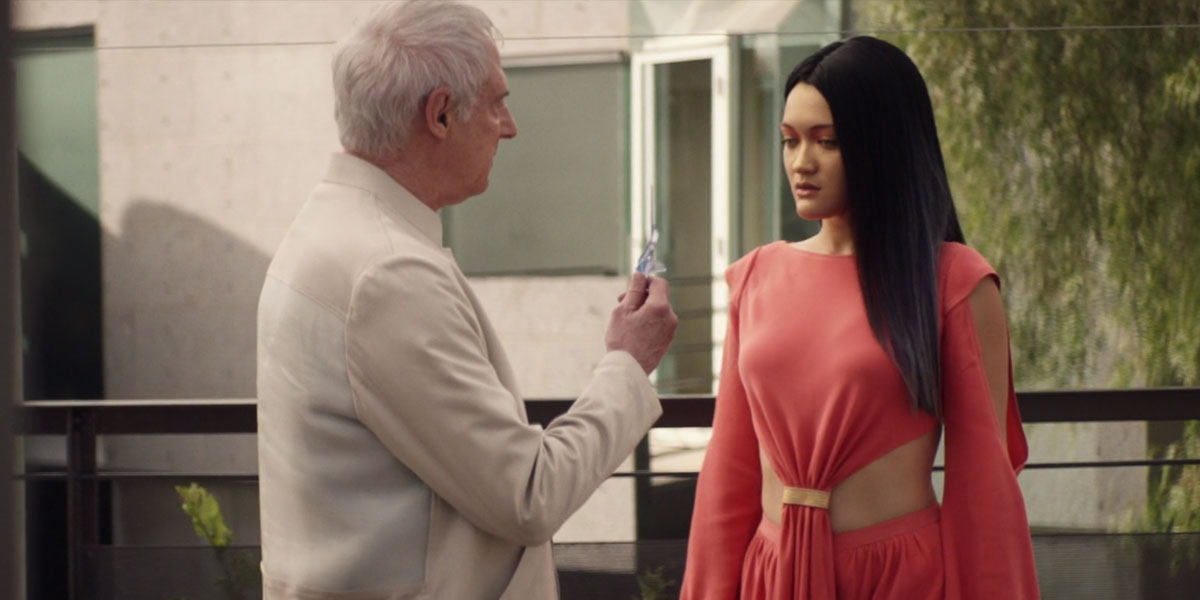 “Et in Acadia Ego, Part 2” is one of, if not the, best episodes of Star Trek: Picard. This finale leaves our characters in a good place.  Seven of Nine (Jeri Ryan) is seemingly a permanent part of La Sirena’s crew, and Picard is, both literally and metaphorically, reborn thanks to his ability to finally let go of the guilt he feels over Data’s death. Raffi (Michelle Hurd), Rios, Jurati, and Soji seem to gel together well, and having them all be at Picard’s side will only prove beneficial to the captain. 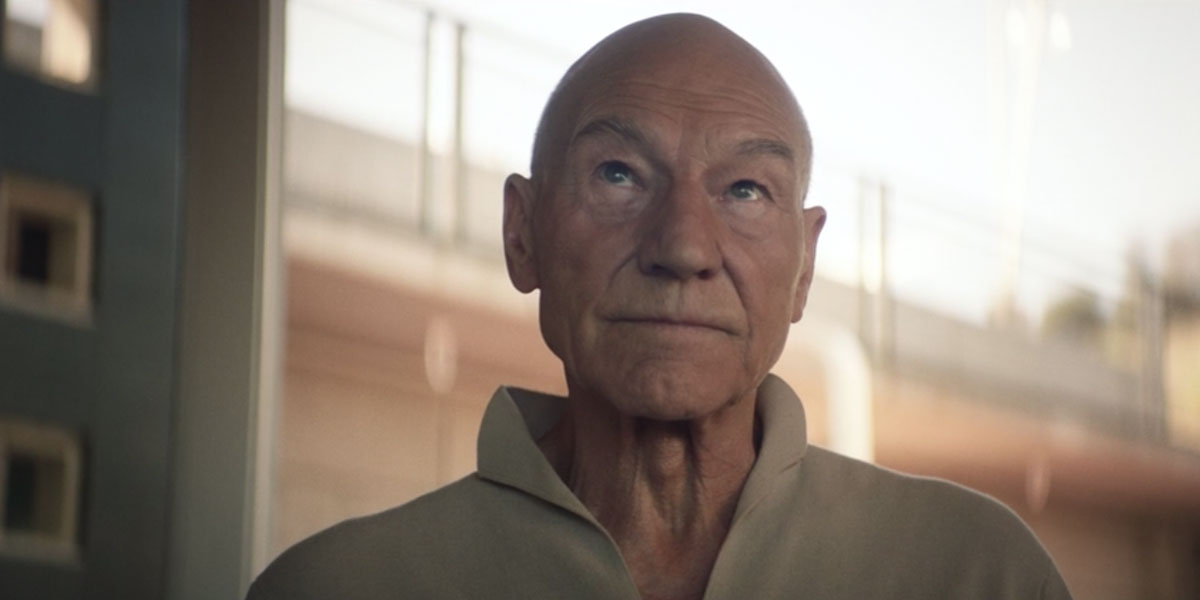 Back in “The End is the Beginning,” Picard issues his first new “engage” order, but he does so decidedly not in the way we were accustomed to. He says it with a smile, which likely purposely reflects the audience’s excitement over that signature line being brought back to life, as well as Picard’s excitement about being back in space. But at the end of “Et in Acadia Ego, Part 2,” Picard issues this command with the authority, confidence, and gravitas we know and love. It’s “blue skies” ahead for these characters, for sure.